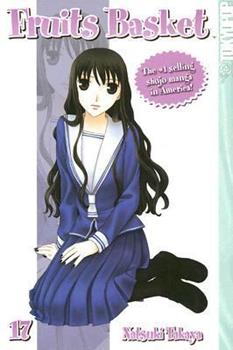 (Book #17 in the Fruits Basket Series)

We receive 28 copies every 6 months.

Akito has more than skeletons hiding in the closet. The curse is not the only reason Kureno won't leave Akito. Who can make Arisa understand Kureno's devotion to Akito? Kureno must talk with Shigure if he ever wants to be free from Akito. Meanwhile, the dark shadow that hovers over the Sohma Estate has fallen on Tohru.

not what i expected from very good condition

Published by Marcos Lopez , 1 year ago
i paid more for vol 17 then vol 20 and bought it with the option very good condition but when i say it it had deep scratches and visible dents and when i that that was the bad part to my surprise it had an orange stain on the top left so not so happy paying more for something that can be considered more like good condition then very good condition

What a GREAT series for young teens!

Published by Thriftbooks.com User , 13 years ago
I just absolutely love this series for my daughters! My two youngest daughters are 13 and 10, and each of them are always looking for the next book in the series. In an age where it's so difficult to get them away from the TV or the computer, I have found them reading books in this series countless times, and preferring to do so over anything else, including playing the Wii. Nothing PG rated or worse in these books! If only we could find more books that could hold up to the standard that the Fruits Basket series does...

Published by Thriftbooks.com User , 14 years ago
i gotta say i'm a complete otaku... meaning obssesive fanatic! this book will not let you down if you're a fanatic too! you might want to reread the series after you read this book. chances are you've forgotten things! plus, things that made NO sense before make oceans of sense! plus it has hanajima-san on the cover.

Published by Thriftbooks.com User , 14 years ago
Volume 17 is perhaps the best volume since Fruits Basket has started. It's full of twists and turns and new information and very moment you're just on the edge of your seat waiting for the next part. I haven't been so hooked to the story since we first met Akito. Akito controls most of the story through flashbacks and explanations. You finally understand why Akito is so crazy! Kureno is a shocker and definately fills in some holes in the plot. Shigure is also explained a little. You're never really able to truly figure out what's going on in Shigure's head but this volume gets tells us a little of what's happening in there. There's also some cute parts throughout all the serious issues with our favorite character Tohru plus so much more. Furuba is starting to draw to a close and now we're coming up the the climax where everything comes together. Volume 18 cannot come soon enough!

Published by Thriftbooks.com User , 14 years ago
One of the biggest "surprises" in this volume I knew already, due to a forum I once passed, so it didn't shock me. What shocked me the most deals with Shigure, who finally gets a spotlight. Though everyone else has always pinned villainy on Akito, I have always felt that Shigure, too, should bear that label. In this volume, the method to the Dog's madness is revealed, and it nearly knocked me out of my chair. Though Kyou and Yuki are given the back seat, the reader is still thrown enough of them to wonder how things will unfold for them. And don't think that just because Shigure, Akito, and Kureno are the spotlight that Hana-chan doesn't get her share of the stage. Being the cover girl of this volume, the reader is privy to more of Saki Hanajima's special powers. To sum things up, it's a fantastic read - just be prepared to have your idea of the Furuba world to be completely rocked. I can't wait until volume 18 is released!

Published by Thriftbooks.com User , 14 years ago
This volume is powerful and disturbing, bringing to a head the actions of the previous three volumes. In this volume, we learn about Kureno and Akito's connection and past, and we receive valuable insight into Akito's psyche/why he acts the way he does. These explanations do not offer a reason to forgive Akito his cruelty and occasional insanity, but they do help us understand what started him down the path he is on. My recommendation is to read the previous volume again before reading this one, to refresh yourself on the course of events leading up to this volume. If you like the idea that Akito is just plain insane and don't want to know -why-, this will not be a satisfying volume. But if the psychology of his psychoses interests you, prepare yourself for an interesting read.
Copyright © 2020 Thriftbooks.com Terms of Use | Privacy Policy | Do Not Sell My Personal Information | Accessibility Statement
ThriftBooks® and the ThriftBooks® logo are registered trademarks of Thrift Books Global, LLC