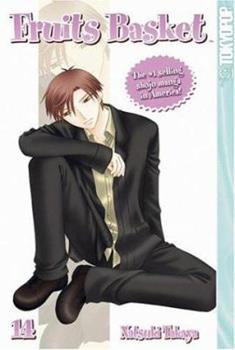 (Book #14 in the Fruits Basket Series)

We receive 31 copies every 6 months.

This description may be from another edition of this product. When Tohru finds an ill and passed out Isuzu in the house, Tohru tries to drag her to the hospital. Meanwhile, Yuki goes to the ASB council room only to find it trashed again, but as the secrets of...

The Lonely and the Beautiful

Published by Thriftbooks.com User , 13 years ago
This is hands down, one of my favorite books in the furuba series. In the first half, we find out more about the stunningly beautiful Rin Sohma, the horse of the zodiac. Rin's story are in many ways similar to many of the other zodiac members' life stories. One word- Tragedy. Rin's childhood was glazed by veneer of joy and love, until one simple question shattered the happy homelife she knew. I don't want to give much away, but after that, her parents couldn't "love" her anymore, and she moved in with Kagura. Trapped and suffocated by the true happiness and love inside a home that wasn't broken beyond repair like Rin's, she soon begins to form a bond with Haru- the friend who was always there to help her escape her new reality. Before the series began, she and Haru fell in love and began an intense relationship. However, Akito finds out, severely injures Rin (who takes the blame to protect Haru, and voices the one thing Rin fears most- her uncomparable love for Haru might suffocate him and sever their relationship, leaving it forever beyond repair. This fear comes from the way her family broke apart during her childhood. Rin has come out of the hospital with one and only one goal. To free her love of the curse. And for him to find happiness in a bigger world. One of the early chapters ends with her tearfully saying to the Haru inside her head- "I'm happy. But that's enough for me. Now it's your turn. I want to release you. Haru, your true happiness...I'll look for it. I'll find it. Because it's okay for it to end with nothing left in my hands." After we find out her story, Rin stumbles upon Shigure's house and faints. She forms a bond with Tohru. Rin is a very perceptive person, and from outside looking in, Rin tells us that Tohru is a lonely person. Almost breaking beneath the happy, clumsy and innocent exterior. While Rin is thinking this, Tohru wakes up from a nightmare of the night her mother died. The second half of the book concentrates on Yuki. He is getting along pretty well with the student council. The story gets lighter, with a lot of humor crammed into to the last pages, like the Cinderella play, where Kyo is cast as prince charming (just what i ordered!) and Saki Hanajima is cast as uhh... Cinderella (yeah, her dress is sooo going to be black). But right after the Cinderella casting, Yuki is locked in a dark room, and finds black paint on the walls. He instantly thinks of Akito, and the story takes yet another darker turn. Yuki closes the volume with the thought "I was looking for a mother in [Tohru]." Rin, the haunting beauty, is searching for a way to break the curse, while trying to survive the loneliness of being away from Haru. Yuki, the prince charming, realizes that the girl he thought was right for him is definitly not going to be for him. Tohru, the bubbly onigiri shining with inner beauty, finally reveals through her nightmare a message that nearly breaks my heart- only the ones who know how scary it is to be lonely will

A good addition to a Furuba collection

Published by Thriftbooks.com User , 15 years ago
This book, while not my favorite one in the series (Kyo doesn't appear much in it) is still a good addition. This volume is largely about Rin, but ends with a chapter or two about Yuki and the student counsil. His true feelings for Tohru revealed, with a cliffhanger that will leave you counting the days till 15 comes out (why does there have to be a FOUR MONTH wait between each volume? It kills me XP)

Published by Thriftbooks.com User , 15 years ago
Well, friends, this is a lovely new volume in my favorite manga! It made me laugh and cry, and get all kinds of shivers down my back! This one mostly covers: *Rin's story--I am ever amazed and inspired how the love of one person (Tohru in this case) can really put a person on the path of healing. We find out why Rin "hated" Tohru, what was going on between Rin and Shigure, and about Rin and Haru's relationship. Lots of light shed on mysteries that have bugged me for many volumes thus far! Now, how can Rin and Tohru work together to break the curse? Go Tohru! *Yuki's Relationship with the Student Council--I am particularly excited about his new friend (is that what he is? As Hatori would say) Kakeru. I am thrilled to see Yuki start to trust other "outsiders". Kakeru is hysterical, in my opinion, and I was surprised to find out his relationship with Machi. Yuki gets locked in a closet, and the results leave me wondering about even more mysteries. (Such as how did Machi know it would bother Yuki so much? What's the black paint's connection to Akito?) We also find out about: *Hiro's Mama, and Hiro's connection to Rin. It's good to see the caring side of Hiro. *Yuki's true feelings for Tohru. I confessed to being very surprised over this one too. Wow. *Shigure. He has the most mysterious character in the whole story, I think. What does he mean when he talks about the curse, anyway??? *Tohru's memory of her mother. What is going on in Tohru? Please, Takaya-san, let Fruits Basket have a happy ending! It would break my heart if it were tragic!!!!! *Tohru's class is going to put on the play Cinderella for this year's Culture Fest! With Kyo as Prince Charming?!! As Takaya-san says, we don't see too much of Kyo in this volume. :( But what we do see is quite heart-warming! This series just awes me. Takaya puts so much detail in, and foreshadowing, that I've caught so many new things in each re-reading. There are so many "special moments" that just make me gush! (Such as Shishou's part in Rin's story. Is anyone other than me madly in love with Shishou?) Fruits Basket truly stands out as a gem among other manga. I wonder how many of us have found a new volume of Furuba in the bookstore, and started jumping up and down, screaming? And then blushed about it later. I have!
Copyright © 2020 Thriftbooks.com Terms of Use | Privacy Policy | Do Not Sell My Personal Information | Accessibility Statement
ThriftBooks® and the ThriftBooks® logo are registered trademarks of Thrift Books Global, LLC