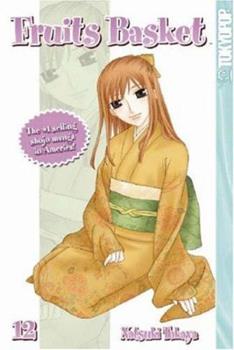 (Book #12 in the Fruits Basket Series)

We receive 36 copies every 6 months.

Chimamanda Ngozi Adichie burst onto the literary scene with her remarkable debut novel, Purple Hibiscus, which critics hailed as "one of the best novels to come out of Africa in years" (Baltimore Sun ), with "prose as lush as the Nigerian landscape that it powerfully evokes" ( The Boston Globe ); The Washington Post called her "the twenty-first-century daughter of Chinua Achebe." Her award-winning Half of a Yellow Sun became an instant classic upon...

a secret retreat from life...

Published by Thriftbooks.com User , 15 years ago
there's two manga i turn to, when i need cheering up Azumanga Daioh and Fruits Basket. Fruits is funny and sweet. And I'm so enjoying the further development of the characters past the anime series. consider me a lifetime fan!

Published by Thriftbooks.com User , 15 years ago
Well, let me just begin by saying that i am totally in love with fruits basket!!! (especially kyo...and kureno, i suppose)This is by far, my favorite book in the series. This volume is filled with drama, especially when yuki meets up with rin, and realizes something about her that he never knew. and what happens when haru shows up? Also, kagura takes kyo on a date, and has an emotional confession about the reason why she always loved him. It truly brought tears to my eyes. and of course, it's hilarious when shigure goes to tohru's parent-teacher conference in place of her grandfather. (her teacher is mayuko, shigure's ex-girlfriend) well, you're just going to have to find out the rest for yourself. GET THIS BOOK!!!!!!

Published by Thriftbooks.com User , 15 years ago
That book is so amesome!! I can't put it down. When I bought it, I started read it about an hour. Believe it or not? Let me tell you...I don't mean to spoil the story... Yuki, Kyo, Shigure and Tohru went back to the house from vacation. (Oh man, Kyo and Yuki gotta TALLER! Whoa!) Kyo wanted to be with Tohru until the end of his life. Tohru made a call to Kazuma which Kyo's father..err foster father!? She wanted to talk with him about how to break the curse. Tohru thought she was really selfish, but she really wanted to break a curse. Kagura realized why she pushed herself to Kyo and it called force love. But she does love him. She told Kyo everything and Kyo didn't say 'I am sorry;, just say thank you. Kyo was only the one friend to Kagura. Kyo never "like" Kagura. Kagura remembered when she saw Kyo's true form, she just ran away. In volume 6, Kagura watched Tohru ran after Kyo when he was true form. That made Kagura realized how she was stupid because of running from Kyo. Anyway, Kyo was just now single and wanted to be with Tohru and love her a lot. Of course, Tohru didn't know...YeT!? Hmm at school, the parent-teacher conferences, Tohru's grandfather couldn't go there because he had thrown his back. (I think.) So instead of, Shigure would go to her grandfather's place for parent-teacher conferences. Shigure wanted to see how Tohru's teacher's face when she sees Shigure. Between them, it was so funny. Um in the end page, Saki liked Kazuma when she saw him walked with Kyo to parent-teacher conference. Kyo shouted that he don't want to her be his mom. Hahaha! ^^ I hope you don't mind that I told you too much...ehh... If you don't read this Fruits basket, go read the volume one. If you don't read this volume, go buy it!!! IT IS SOO MUCH!!! YiKes!!! =D

Published by Thriftbooks.com User , 15 years ago
it's amazing that furuba has managed to stay so funny for so long, as I have read the entire series and I must say-- it's all down hill from here. I don't mean the quality of the manga goes down--the story line gets sadder and sadder, but some of it remains gutbustingly funny. In this volume, Tohru-kun, Kyo-kun, and Yuki-kun prepare to go back to school and for their parent teacher confrences. Tohru visits her grandpa in the hospital (he threw out his back)and he brings up painful part of her past. Tohru also pays a visit to Shisou-san (whom Hana-chan may have a crush on)and learns the more about the Sohma family's eternaly patronizing curse. kagura and kyo have a heart to heart about why kagura has forced herself on Kyo all these years, and Yuki starts his term as the new class president--could he have found a new love interest? it's true that the mystery surrounding the Sohmas is yet to be uncovered, but when Akito reveals a shocking secret in a later volume, a clue to their existence begins to unravel. Furuba is not--as I once suspected--'fluffy'-- it's hardcore, heartbreaking, and hilairious, and it succeeds on very level. One of the greatest manga series ever.

Published by Thriftbooks.com User , 16 years ago
Well.....in this volume things are looking up for Tohru and Kyo, and has Yuki found another love?! Are they in the student council?.......Of course not (heh heh) Has Hana found her one true soul-mate? Will she become Kyo's mother?? *gasp* that part was soooo hilarious KYA HA HA HA HA!!! Will Kyo and Kagura finally be over?!?! You have to get this book, it is sooo good hopefully Tohru can break the curse soon....I give it two thumbs up!! And 1000000000000 stars (if I could heh heh) so whatr' you waiting for buy, buy, buy! p.s. I also recomend Carcaptor Sakura and Cardcaptor Sakura Master of the Clow, Mars, Immortal Rain, and of course FRUITS BASKET!! *clap clap clap* K then, buy, buy, buy!!
Copyright © 2020 Thriftbooks.com Terms of Use | Privacy Policy | Do Not Sell My Personal Information | Accessibility Statement
ThriftBooks® and the ThriftBooks® logo are registered trademarks of Thrift Books Global, LLC