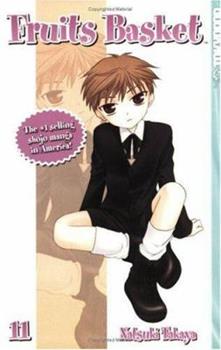 (Book #11 in the Fruits Basket Series)

This description may be from another edition of this product. Fruits Basket Manga Volume 11Still at the Sohma family vacation house, Tohru and the gang are obliged to visit Akito everyday because Akito is at the other vacation house. However, day after day...

We receive 37 copies every 6 months.

Published by Thriftbooks.com User , 15 years ago
Fruits Basket volume 11 is probably among the darkest volumes in the series. When you read this one, I can assure you that you will easily be moved to tears - and also part of what makes it dark is our finding out about the zodiacs' futures, particularly Kyo's. It's obvious that this family holds lots of betrayal and backstabbing, and this volume makes that a big part of its aura. Parts of the book are rather surprising and catch you off-guard while you're reading it. I remember sitting on my bed while reading it, turning to the next page and going "WTF KYO KNEW KYOKO" because basically, this is the volume where we find out about that. Akito finally confronts Tohru with her real attitude towards outsiders, and gives her a small wound in her anger (poor Tohru!). However, Momiji fans will love this volume, as we see his courageous and protective side towards loved ones. And LAST but not least, the "love triangle" Between Tohru, Yuki and Kyo is certainly getting more complex. You'll know that in the previous volume, Yuki confessed to himself his love for Tohru. In this volume, the same happens with Kyo. I know who she ends up with in the end at this point (and also by reading spoilers! Haha), but I won't tell you for the sake of my poor head before getting hit by an iron skillet. VERY worthy of five stars, although my favorite volumes are still 1, 4, 6, and 13.

It just keeps getting better and better!

Published by Thriftbooks.com User , 15 years ago
So in the last volume, Yuki (secretly says to himself that he loves Tohru!) poor Kyo fans, although I could never chose between the two. Both are just as deserving. But in this volume Akito calls in all the Sohma's at their vacationing site and singaling punishes them emotionally. He realizes that Tohru has become one of the family and then he storms off to get her, but Momiji defends Tohru! Despite what he looks like he's only a year younger and has every right to be Tohru's prince charming too! But anyway, Kyo won't admit it when Akito is talking to him but he's also in love with Tohru...what will happen next? Things seem to just get more intense but it's becoming better and BETTER! Buy this book and the rest of the series!

Published by Thriftbooks.com User , 16 years ago
After the moonlight moment between Yuki and Tohru they head back to the Sohma home together. The next day Akito summons for Haru to pay him a visit, while Tohru and Kyo head to the beach to make sand castles. Yuki and Momitchi meets up with them and Yuki is tender with Tohru again. Akito and Kureno head to the Sohma house to meet with Tohru, a woman whom Akito despises. They find their way to the beach, where he sees Kyo and Tohru having fun and being happy, and it unnerves him so much he decides to prolong the visit. On the way home Tohru encounters a horse on the ground. This turns out to be Isuzu Sohma, another member of the zodiac. She turns back to her female form and warns Tohru and Yuki not to tell anyone she was there and runs off half naked. Akito has demanded that Kyo be brought to him. Tohru thinks this is a good sign, though Kyo knows it cannot be. Yuki warns him not to lose his temper in front of Akito, but this proves futile as Akito brings up some painful memories, including a bet he and Kyo have that will ultimately seal Kyo's doom if he loses. Kyo reveals to Akito just how much Tohru means to him. Akito becomes enraged over the revelations of Kyo's heart, which he attempts to deny. He leaves Akito to go see her, and tries to pretend nothing bad happened. The Sohmas decide to end their vacation with a bang...literally, by blowing off an obscene amount of fireworks at Momitchi's suggestion. Akito makes an appearance in the middle of the night at the house and demands to see Tohru. Momitchi bars his way, and gets hurt in the process. Akito tells her of his true plans for the members of the zodiac, plans that don't include outsiders, or Kyo for that matter. Akito hurts Tohru's face and Kureno shows up to retrieve him. Akito tells Tohru Kureno is the rooster, and also that as long as he exists he (Akito) is the God of the Sohma clan. This leaves Tohru thinking into the next evening when they finally have their fireworks. She decides that she must endeavor to break the curse, no matter what it takes. ...wow... It didn't seem possible but the series just keeps getting better and better... my gods, I didn't see this coming. The revelation of the relationship between Kyo and Akito was amazing. The fact that Kyo must defeat Yuki to win his freedom, heart wrenching. Ultimately, I think he will defeat him, but not in the manner of fighting. What I would like to see is that Kyo defeats him in the manners of the heart, by winning Tohru's heart. I think that would be a terrific ending, though I would be sorry to see Yuki get hurt. Realistically though, he has had so much of Tohru's time in the series a far as romance goes, but him being the rat has a better chance of being with someone than Kyo, what with his "true cat form" and all, who's going to accept him like that besides Tohru? I may be waxing sentimental, but I would prefer to see I end with Tohru and Kyo together for that reason alone... I'd like to see that cat win something tan

Published by Thriftbooks.com User , 16 years ago
Of course this book is gonna rock! it has the major funny, the good story,(made me sniffle) and of course, it has Momiji. He rocks. The story focuses what's going on with Tohru, Yuki, and Kyo. While still at the summer house, Akito starts calling the members of the zodiac to "speak" with him. He calls Kyo and after an argument, jumps to some pretty amazing conclusions. That's all i can say without giving it away, but all in all, this book is a MUST READ. If you don't read it cause of the romance stuff, or the fact that this is(don't take any offense, ladies) a chick's (shojo, right?) manga, at least read it for the awesome rabbit. rock on Takaya-San!!!

Published by Thriftbooks.com User , 16 years ago
This is the best manga series i ever read! The art work is fantistic and they even put in fan art at the end of each book. The plot is truly unique and Tohru is the main character along with Kyo (the cat) and Yuki (the rat). Yuki and Kyo hearts are very clouded with fear and anger until Tohru Honda (the "flower")comes into there lives. Anyway in the 11th volume in fruits basket Akito starts wanting everyone except Kyo to come and visit him. But then one day Kyo is requested to come over and Akito (while in a argument) helps Kyo realize something very important, and Akito reveals his place in the Zodiac!
Copyright © 2020 Thriftbooks.com Terms of Use | Privacy Policy | Do Not Sell My Personal Information | Accessibility Statement
ThriftBooks® and the ThriftBooks® logo are registered trademarks of Thrift Books Global, LLC