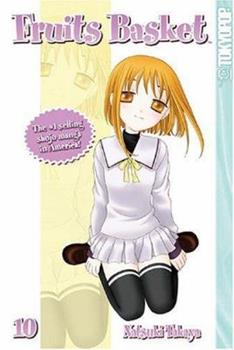 (Book #10 in the Fruits Basket Series)

Tohru and the Sohma members are at the family's summerhouse. Alas, it's not all fun in the sun on this little trip. Akito pays a surprise visit, causing a commotion for the rest of the family.

Published by Thriftbooks.com User , 16 years ago
No matter how much you hear what happens from other people who have read the Fruits Basket books, nothing beats really reading them yourselves. The artwork is simply amazing, and the plot always seems to be changing from volume to volume. In this 10th installment of the series many characters find themselvs uncertain about their own feelings. The summerhouse fun continues until akito decides to show up....and, well, you should just read it yourself.... But I'll just say that quite a bit of interesting flirting goes on between Kyo and Tohru....and Yuki and Tohru especially....

Published by Thriftbooks.com User , 16 years ago
This volume starts out with Tohru Honda and the Sohma crew spending time at the new Summer house Shigure rented... without Shigure. Shigure pays a visit to Akito, telling him where all the others are. Yuki also comes down with a fever that concerns Tohru and while everyone is out of the room he promises to tell Tohru something he has kept secret in the future. Kisa and Hiro show up at the summer home. Kisa buddies up to Tohru, which only serves to annoy Hiro. Tohru acts a bit more reserved about her mother after some harsh words from Hiro on the subject. Shigure visit's a bookstore run by Mayuko Shiraki, the homeroom teacher of Tohru and Shigure's ex-girlfriend. Their pasts, and that of Kana and Hatori Sohma, are revealed. Hatori also shows up at the book store, much to Mayuko's surprise. Her feelings for him from the past return to rear their ugly head, but she must now deal with the fact that he may have a girlfriend, according to Shigure. Shigure pays a visit to the summer home, where they are gearing up to eat watermelons. in the evening Kyo confronts Tohru on why she has been acting distant and he tells her about the death of his mother. Hatori also shows up to tell Shigure that he has delivered Akito and Kureno Sohma to a nearby guest house. Yuki meets Akito unexpectedly , just before the news of his presence hits the Sohma home. They realize they all must pay a visit, all but Tohru and Kyo, that is. Tohru goes out in the evening to search for Yuki, who has not returned from his walk yet, and under a shooting star Yuki reveals some things that weigh heavily on his mind along with a moment they shared together in their younger pasts, and then shares an intimate moment with Tohru. So, the romance between Tohru and Yuki is heating up as I expected, but I can't help but feel sad for Kyo. I wish he would be a man and confess, but alas, he hasn't yet. This is still one of the best so far, and the inclusion of Akito only manages to amp up the thrill factor. Glorious I tell you, can't wait to read the next one.

Published by Thriftbooks.com User , 16 years ago
Volume ten is leading up to suspense and definite drama. You can definitely tell that Kyo and Yuki have feelings towards Tohru, deeper feelings then what we have seen so far. With Yuki trying to open the closed lid, I must agree with Tohru, something inside of him is moving. The ending to this book of course just made me want to cry because we now know that Yuki feels something very special towards Tohru. That special section on Hatori and Mayu is really good. I never really knew that Mayu was connected to the Sohmas in the way she was. I was a little worried about when Akito went to visit Haru, Momiji, Hiro, and Kisa. But that changed quickly when we switched to Tohru and Yuki All I can say is this is a really good book and you should buy it if you haven't.

Published by Thriftbooks.com User , 16 years ago
This is easily the best Fruits Basket volume to date! The whole Sohma gang, along with Tohru of course, makes plans to head out to a summer resort together. Meanwhile, back home,romance is in the air!! Hatori has a new girlfriend..? Shigure sees his ex-girlfriend, and plays matchmaker for Hatori... with the one woman outside the family who still remembers the time the sombre doctor was in love with Kana. She's been in love with him for a long time, but hasn't seen him for two years.... until that sly dog (literally) Shigure intervenes! Meanwhile, one of the zodiac members discovers they're going to have a younger sibling soon, Tohru's relationship with both Kyo and Yuki deepens, and a suprise visit from Akito to the resort sends everything out of whack. This new volume from Natsuki Takaya will make you laugh and cry by turns, make you want to smack the characters for being so naive (but nicely), and will definitely leave you craving more fruits basket!!

Opening of the lid and more...

Published by Thriftbooks.com User , 16 years ago
Very good volume, all in all. The younger cast spend their summer break vacationing at the Sohmas' beach house, inciting water races, hunts for stag beetles, watermelon-smashing, a little bit of romance, and...also some angst foreshadowed in there. We see a glimpse of Yuki's past through his eyes and discover that Tooru may have her own demons to exorcise as well - namely, about her mother. Also some Hiro angst thrown in by way of an argument with Kisa. We then switch gears and learn about Mayuko's (that's right, Tooru and co.'s homeroom teacher) bittersweet romance. It is discovered that she had an unrequited love for Hatori during his and Kana's courtship, but as Kana was her best friend she decided to repress her feelings and dated Shigure. However, this only made her even lonelier. In the present, Shigure comes back to visit his ex-girlfriend and talks to her about Hatori, who later pays a visit to her as well. Back to the beach house, Tooru does some thinking on what the life of a Juunishi member must be like, and she and Kyou do some talking about their parents. Meanwhile, Yuki takes a walk by himself and meets up with Kureno and Akito. (Shigure and Hatori also show up prior to this.) Akito seems to tell him something that consequently "opens the lid" for him, but we won't learn what is said until another few volumes. The last scene is a sad but sweet one, whereby Yuki fully understands his feelings for Tooru. And on a closing note, let me just say that they are much, much more complicated than they appear.
Copyright © 2020 Thriftbooks.com Terms of Use | Privacy Policy | Do Not Sell My Personal Information | Accessibility Statement
ThriftBooks® and the ThriftBooks® logo are registered trademarks of Thrift Books Global, LLC