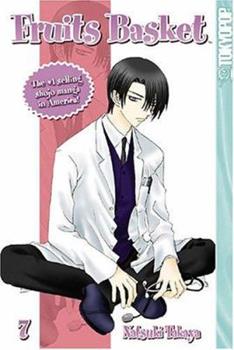 (Book #7 in the Fruits Basket Series)

This description may be from another edition of this product. The world's best shojo manga opens a new chapter in the Sohma family's story. Tragedy continues to smother the family, and now it seems to be spreading to those connected to them as well.

Published by Thriftbooks.com User , 14 years ago
I own this series in Japanese, and it is a wonderful read! It has all the important elements of a good shoujo manga: it is romantic, twisted, with a shoujo (in the traditional meaning of the word) involved in finding a new family and love triangles galore. It is just a very fun read, no matter the language!

Published by Thriftbooks.com User , 16 years ago
Kisa Sohma is spending more and more time at Shigure's house to see Tohru, much to another's dismay. On a chance encounter Tohru meets Hiro Sohma, a conceited young boy who delights in ordering her about. His personality is well suited for his animal sign, the ram or sheep. Hiro Sohma begins to hang about the Sohma house as well and is constantly nagging Tohru about letting people walk all over her...by walking all over her. A bit of this young tyrant's past is revealed with a decisive moment between him and Akito that leaves Kisa hospitalized. After a trip to the local pool Uo and Hana decide to buy Tohru a bathing suit to replace the middle school one she still wears. They recruit the Sohma boys to help them choose one. A bit of Uo's past is revealed surrounding Tohru's mother. Uo's past is gone into, her developing friendship with Tohru and her mother, Kiyoko, and her gang member days. The Prince Yuki fan club rears it's ugly head again. This time President Motoko is concerned about Yuki's student council presidency...because she doesn't want any women serving on the council with him. The opportunity to speak to him presents itself a few times, and she exploits these chances to the utmost. This is a down volume from the last amazing one, but it's still a great read. I'm beginning to appreciate Tohru's mother more and more as it goes on, and definitely began to see the glory that is Arisa in this one. I'll keep reading, they are all so good.

Yay! What a wonderful volume!

Published by Thriftbooks.com User , 16 years ago
This is a lovely volume of Fruits Basket! And it contains one of my favorite stories- how Kyoko-san saved Arisa from becoming another drop-out girl gang member. Their relationship was so special- and in a way I think their characters are very parallel. This story brings me to tears and awe every time I read it... Anyway... I'm not the biggest fan of Hiro...he reminds me of why I hated being in middle school- so many smart-aleck boys like him! (But it is cute how Kyo seems to have this need to defend Tohru from him...aww...) Lots of stuff about the Prince Yuki fanclub- these girls seriously need to get a reality check! Lol...

Published by Thriftbooks.com User , 16 years ago
Tohru as you known is pretty much Kisa's best friend-until Hiro comes along! Hiro is the rudest 6th graders ever! Mosty to Tohru and Kyo. Anyways, he ends up desiding he and Tohru can be Friendly Rivals at least. Of Course it's summer Time and Tohru and the gang love to swim, but Tohru's still using her middle school swimsuit! So they want to get her a REAL one -at least Saki, Arisa and Shigure. Yuki is embaressted by the fact that he's going to a girl's swimsuit store. Kyo doesn't really care. They are really no help at all.. But anyhoo, Arisa's old Yankee friends stop by to hurt her. But it -oops! Almost Told you the best part! It tells you how Tohru's mom became friends with Arisa. The Prince Yuki Sohma Fan Club wants to know if a girl is on the Student Concil Staff and doing something to Yuki.. girls are so cruel. Misson: Get to Yuki! They are crazy in love. But in here like the other books their are PG-13 refrecenes-like inside jokes that are a little gross. and Mild swearing. Not too bad. But the book is super cute and funny It is well worth the money aka $10.00

Published by Thriftbooks.com User , 16 years ago
This rules!! Seriously. It's one of the best so far of Furuba in my opinion. Kyo is much sweeter to Tohru, she meets another member of the Chinese Zodiac, even though they're not on the best of terms, and you find out how Uo-chan met Tohru. It's a must read, so what are you doing here still reading my review?? GO ANY BUY, I TELL YOU!! BUY!!!!
Copyright © 2020 Thriftbooks.com Terms of Use | Privacy Policy | Do Not Sell My Personal Information | Accessibility Statement
ThriftBooks® and the ThriftBooks® logo are registered trademarks of Thrift Books Global, LLC