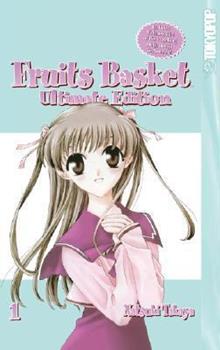 We receive 14 copies every 6 months.

Published by Thriftbooks.com User , 13 years ago
This is the best graphic novel EVER! It's hilarious and the plot is great! Just make sure you know how to read it properly! ^_^

Published by Thriftbooks.com User , 13 years ago
I picked this up, because I wanted to know what the fuss is all about. Then, I read up to volume 5 and it was heartbreaking. I could relate what the characters were going through and I almost cried *sniff*. The author says she's like the main character, but if that's true, then, she's not a normal person. The main character is that person that never loses hope, always positive, never thinks of herself but helping others. I recommend it to everyone, you'll love it!!! I assure you!!!

Published by Thriftbooks.com User , 14 years ago
This is a most have for any Fruits Basket fan! Some of the detals in this book are not in the paperback book. P.S. I'm not Matthew, I'm his "little girl"( not THAT little:))

Published by Thriftbooks.com User , 14 years ago
Natsuki Takaya hit manga gold with "Fruits Basket," a romantic/comic/fantasy story about one cursed family, and a girl who might be able to set them all free. And "Fruits Basket Ultimate Edition Volume 1" is a must-have for any manga fan who doesn't already own the series -- two books' worth compiled into one, with a hardcover binding, colour art and new foreword. The story itself starts a big sluggishly, but soon falls into its comedic and dramatic stride. Orphaned Tohru Honda is living in a tent in the woods. But one day she bumps into the large house of school idol Yuki Sohma, and his older cousin Shigure -- and after a landslide buries her tent and most of her belongings, they take Tohru in as a housekeeper/cook. But when the volatile Kyo Sohma breaks in to fight with Yuki, Tohru slips and accidently hugs him -- and he transforms into a cat. Turns out that the Sohma family is cursed -- certain members turn into animals of the Chinese zodiac, including Yuki and Shigure (rat and dog, respectively). Warm-hearted Tohru doesn't let this stop her from befriending the Sohmas, and soon the three men find that they can't do without her. Now that she's moved in, her pals Saki and Arisa stay for the night to make sure the Sohmas are taking good care of her, and when New Year's rolls around, Kyo and Yuki find themselves wondering what to do -- go to the main house with the other family, or stay with Tohru? And at the school, the students are planning a cultural festival, and Tohru encounters two other Sohmas -- the chilly doctor Hatori, and the effusive half-German Momiji, who is instantly pals with Tohru. But Tohru learns of a different side to the zodiac members' lives, when she hears about Hatori's tragic past. The two volumes compiled here are basically the setup for the rest of the series -- we get introduced to the characters, the settings, and we start to see a bit of their backgrounds. And it doesn't really take long to start liking this quirky, tempestuous bunch and their misadventures. Takaya spends most of the first volume introducing the characters, and arranging for them to live in the same house. Her artwork also takes a little while to get adjusted to (the first few chapters are a bit awkward) but settles into an elegant, polished style by mid-book. And she has a knack for very, very funny dialogue ("Didn't she say she'd forgive him for cheating on her?" "I DIDN'T SAY I WOULDN'T PUNISH HIM FIRST!"). But while there's plenty of comedy (Yuki in a dress, Kagura's "crazy love"), Takaya also hints at the darker sides of the Sohma family, including flashbacks of Hatori's love affair with his ex-fiancee, and the bitterly chilly way that it fell apart. Tohru is a surprising character -- she's almost Pollyannaish in her optimism and cheerfulness. But Takaya makes her likable, goofy and clueless. And as the story goes on, we see glimpses of her loneliness and sadness. She's backed by a colourful cast led by the quiet Yuki, goofily Machiev
Copyright © 2020 Thriftbooks.com Terms of Use | Privacy Policy | Do Not Sell My Personal Information | Accessibility Statement
ThriftBooks® and the ThriftBooks® logo are registered trademarks of Thrift Books Global, LLC