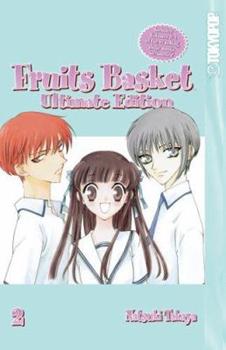 This is a must-have hardcover bind-up of 'Fruits Basket' volumes three and four. It includes colour art, a new foreword, and a creator autograph.

Published by Thriftbooks.com User , 13 years ago
"Fruits Basket" is one of those manga that is just too adorable for words, though the plot sounds kind of lame -- the adventures of the ever-optimistic Tohru Honda, and her dealings with the cursed Sohma family. And the second "Fruits Basket Ultimate Edition" -- which brings together the third and fourth volumes of the manga -- expands the zodiac Sohmas even further. And while the plot is still riddled with deliciously wild comedy and hints of romance, Natsuki Takaya starts weaving some darker threads into the story. While on an endurance run, Tohru sees a white-haired man lying by the roadside, and rushes to help -- only to find that he's Hatsuharu Sohma, a punky teenager who's come to challenge Kyo. But then Yuki collapses from an asthma attack -- and Haru's cursed form is the only one that can get him home discreetly. Things get even more awkward when Valentine's Day rolls around: Kyo finds himself being violently wooed by Kagura, and dragged on a double-date while Shigure pays a visit to Hatori. A month later, Momiji unveils a surprise for Tohru -- a trip to a hot spring resort, run by a very easily upset "concubine." It gives our heroes a chance to relax and recuperate. But not for long -- as Momiji and Haru join Tohru's high school, she accidentally bumps into Akito, the head of the family, who proceeds to quietly threaten Yuki. And later on, Tohru ends up having a snake slither up her shirt -- only to find that it's Yuki's estranged older brother, the flamboyant, charmingly arrogant Ayame. He is now desperately trying to mend the rift -- and Tohru wants to help, of course. When the anniversary of Tohru's mother's death rolls around, the Sohmas become involved in the lighthearted ritual at her graveside. But Hana hints at a dark connection between Tohru's mother and Kyo -- and Tohru finds out the saddening story about Momiji's own mother, and why she doesn't remember her own son. The first "ultimate edition" laid the groundwork and started introducing our lovable Sohmas with their very embarrassing curses. And the second volume proceeds to introduce a few more -- some of them quite important and memorable -- and fleshes out the ones we've already been introduced to. And Takaya was clearly having fun with it. In fact, most of the story is fun -- we get lots of slapstick, violent falls, leeks in the mouth, suicide threats from Shigure's miserable editor, and the occasional martial arts battle. The new characters add their own brands of comedy, whether it's Ayame curling up in bed with an outraged Kyo, or Haru demonstrating to the class president that... uh, the carpet matches the oddly-coloured drapes ("Did he show him?!" "He showed him!"). But Takaya starts exploring darker avenues -- some nasty secrets are being kept from our teenage heroes, and she drops some broad hints that Kyo is somehow connected to Kyoko Honda's death. And her strong, elegant artwork has become even more assured, especially in the more poignant moments -- suc
Copyright © 2020 Thriftbooks.com Terms of Use | Privacy Policy | Do Not Sell My Personal Information | Accessibility Statement
ThriftBooks® and the ThriftBooks® logo are registered trademarks of Thrift Books Global, LLC