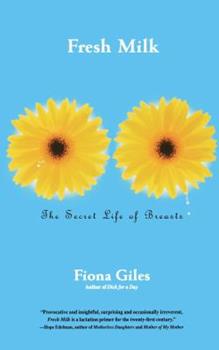 While countless breastfeeding guides crowd bookshelves, not one of them speaks to women with anything approaching bestselling author Fiona Giles's level of intimacy and vitality. In Fresh Milk, through a provocative collection of stories, memories, and personal accounts, Giles uncovers the myths and truths of the lactating breast. From the young mother grappling with the bewildering trappings of maternity wear to the woman who finds herself surprisingly...

Published by Thriftbooks.com User , 17 years ago
If you've ever pondered the contradictions about breasts in our society, this is an engaging book. It is based on the author's research and questionnaires about breastfeeding, and has stories from mothers, husbands, lovers, and adults who recall their own experiences being breastfed. Breasts are highly politicized (e.g. the controversy over Janet Jackson's momentary exposure). The topic of breastfeeding adds heat to the fire, as it blurs the boundary between motherhood and sexuality in a society of ideologues -- from Puritan prudes who think public breastfeeding is disgusting, or too sexy, to some breastfeeding activists who advocate a totally non-sexual role for breasts. Thus, almost anything said by the author would be taboo for someone. Given that many of the author's accounts are anonymous, the coverage is more diverse than one might expect in the public discourse. I liked the story of twin boys who had successful breastfeeding experiences as young children. Later in adolescence they revealed to their mother their attraction to Pamela Anderson's breasts -- just the opposite predicted by some Freudians who believe that sexual interest in prominent breasts is the result of inadequate breastfeeding. Thus, this book has much to invoke a more thoughtful discourse, and to comfort mothers and couples who want to raise their children naturally in our society that is so uptight about breasts.

Enjoyable light reading, with a side of fresh squeezed....

Published by Thriftbooks.com User , 17 years ago
This collection of stories, focused on lactation breasts (male and female) is a page turner. Not so much to see what happens next, but who it happens to. They people in this book are real, like you and me. The all have in common the desire to give the best to their child (with the exception of the lactation fetishists, which could have truly been left out of the book in my opinion). They suffer adversity, set backs, and triumphs. They tell the stories of the human condition. Nothing is easy for everyone, but you persevere and go on. Some of these women are exalted in their role as provider, and they shine in their pride of a job well done. And some of them still harbor resentment over their experience. No matter the outcome, we (the lactating women of the world) can see a little of ourselves in all of them.

All women can lactate

Published by Thriftbooks.com User , 19 years ago
I was wandering through the bookshop as a shortcut to the bus stop jingling the last of my change, when I glanced down to an image of soft floating breasts. Quickly checking and adjusting my own to find they were still trapped under the fully buttoned shirt, I reached down to meet my new friend, a glorious book on the mysteries and enticement of mother?s milk.Our youngest, now a womanly teenager, knows well my evil plan to elevate breastfeeding to the second most important job in the world, so she was happy to use her plastic for the ...purchase.Why at 49, would I bother breathing in the words of this Fiona Giles? Why would I feel the need to read all Easter then run around yelling ?I told you so?, to Uni students, home just to reconnect with school friends? Have we come far enough in our respect for human milk to accept the need for public sharing of lactation experiences? Fiona Giles has interviewed well, allowing an impressive array of stories to flood our senses. Maybe a submitted email or two was tinged with slightly elevated fantasy, however, all adds to the mix. I hope she has pressed the right buttons to encourage open discussion of the vitality of ?white blood.?Thank goodness we are being allowed to gradually catch up to traditional womens? knowledge of the benefits of breastmilk as a medicine and a life long womens? resource. Any female from adolesence til death can produce human milk, as long as suckling occurs several times a day, or a breast pump is involved. Now, if that is news to you, take a deep breath and read on.Would you relactate?Your teenage child develops SARS ...A Never! Well he shouldn?t have stowed away to China in the first place.B Maybe. But I?d want to sue someone if I got cracked nipples again.C Sure. As long as no-one expected me to deliver it fresh from the sack, rather than freshly squeezed.D Of course. I already freeze my milk and send it to an orphan.Didn?t turn blue. Then buy Fiona Giles? ?Fresh Milk. The secret life of breasts.?Do I have qualifications to review such an inspiational book? Well, I spent most of the eighties in a nursing bra, but no-one gave me a framed degree. And the most important job? Giving birth, of course.

A Lactivist Speaks Up

Published by Thriftbooks.com User , 19 years ago
I love it! I am a very proud "lactivist" with a beautiful healthy 13 month old moo. This book is really a breath of fresh air, with some really thought provoking ideas. Since our culture almost let breastfeeding become a "lost art", I think that we really need ideas like those from Fiona Giles that blast open people's ideas of what breastfeeding is and can be. I've already started asking other nursing mothers some of the questions posed in the book. This has really started me thinking about things in a whole new light.

Published by Thriftbooks.com User , 19 years ago
It is a sad society that finds silicone-filled breasts more alluring than milk-filled breasts. The female breast symbolically reflects the long-established and tiresome male classification of woman as either Madonna or whore. According to men, and sadly some women, the female breast exists to be eroticised, fetishised, morphed, manipulated, enhanced and exploited UNTIL it begins to function. As soon as breasts start to express themselves they are immediately sanctified, purified, hidden and forbidden. Too sad.In one interview Kimberley Hefner boasted that she never breastfed her children, not once. Her prerogative, of course, but it is ironic that ex-husband Hugh's Playboy fortune, and therefore hers, was built entirely on male worship of the female breast. But when it came to employing her own breasts for their true and original purpose, she baulked. While Kimberley feared the assumed domestication of her breasts, staunch breastfeeding advocates do the opposite by denying the lactating breast any hint of its inherent sensuality and sexuality. No, no, do not touch, do not admire.In "Fresh Milk" Fiona Giles and her contributors reveal that nurture and pleasure do not negate each other; you can have both. As a book "Fresh Milk" ignores the protocols of easy classification and booksellers may be uncertain as to which shelf it belongs. It does break the conventional mould by embracing academia and anecdote, mirth and mythology, fact and fantasy. So much I never knew before about breasts, breast-feeding, lactation, and mothers' milk I discovered in this remarkable book. It is an inspiring, positive, and dare I say `uplifting' journey. "Fresh Milk" is refreshingly original, amusing and liberating. Oh yes, and it's also erotic.Dean
Trustpilot
Copyright © 2022 Thriftbooks.com Terms of Use | Privacy Policy | Do Not Sell or Share My Personal Information | Accessibility Statement
ThriftBooks® and the ThriftBooks® logo are registered trademarks of Thrift Books Global, LLC