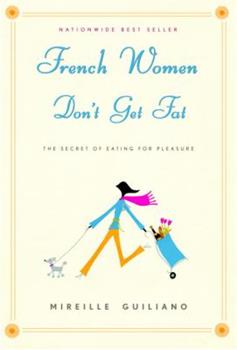 French Women Don't Get Fat: The Secret of Eating for Pleasure

Stylish, convincing, wise, funny-and just in time: the ultimate non -diet book, which could radically change the way you think and live. French women don't get fat, but they do eat bread and pastry, drink wine, and regularly enjoy three-course meals. In her delightful tale, Mireille Guiliano unlocks the simple secrets of this "French paradox"-how to enjoy food and stay slim and healthy. Hers is a charming, sensible, and powerfully life-affirming view...

Published by Thriftbooks.com User , 17 years ago
In reading the reviews below, it just never ceases to amaze me the excuses that Americans try to use to justify why we have to stay fat. Most of the negative reviewers have clearly never read the book or have serious comprehension problems or, more likely, simply want to blame "genetics" "busy lifestyle" "kids" "metabolism" or some other scapegoat for their obesity. The only problem with this book is that the author, Mireille Guiliano, doesn't understand the American's Calvinistic/Puritanical complex about weight (no French person could!). In the U.S. being fat is considered a "sin", a "moral failure" rather than what it really is: A (potentially) temporary loss of equilibrium that almost everyone goes through from time to time and has absolutely nothing to do with morals, character, goodness, badness, God, the Devil, or anything else! That's why so many of the reviewers get so defensive and throw out ridiculous, and false, banalities about French smoking habits, attitudes, and, oddly enough, menstruation! "Well yeah I'm fat...but..but..but...hey the French SMOKE!! That's a worse sin than being fat, right?" "Well...uh....yeah I'm fat...but...but.....French women diet to the point of missing their periods!!!" Needless to say, not only is that untrue according to the medical establishment (French women don't have a higher rate of missing periods due to low weight or low percentage of body fat than American women) but can you imagine the consciousness of the idiot (below) who wrote it? Only in America!! First of all, I am obese. I've tried every diet, "lifestyle change", program, shake, bar, book on weight loss there is. I've fasted, I've juiced, I've cut carbs, fat, high-fructose corn syrup, sugar, and everything else you can name. I've done Ornish, Pritikin, Powter, Atkins, Sugar Busters, Suzanne Somers, and on and on and on. These are all unsustainable, dead end weight loss strategies and some (like Atkins and the other low-carb monsters) are extremely bad for your health. My health problems (hypertension, sleep apnea) were prompting me to consider gastric bypass surgery. Then, I found three books: French Women Don't Get Fat by Mireille Guiliano, The Fat Fallacy by Will Clower, and The Martini Diet by "Gin" Sander. Suddenly, food was no longer the enemy, lack of planning and foresight was! Now, I'm been losing weight steadily, my health is slowly improving, and I'm living a sustainable lifestyle that I LOVE!! By truly enjoying the food that I eat. By only eating the very best I can afford (I am not rich). By sitting down and eating like a civilized person and all the rest of the suggestions in this book. Again, I am not rich, so I can't drink Veuve Clicquot with every meal, but I do go down to Trader Joe's and buy a variety of $2 - $5 wines some of which are very good, others not to! Of course, the book is simply a guideline and you don't have to drink wine at all if you don't want too. You don't have to eat chocolate i

Published by Thriftbooks.com User , 18 years ago
Mireille Guliano President and CEO of the champagne company Cliquot Inc. is the author of "French Women Don't Get Fat". Guliano travels 180 days of the year, eating out frequently and indulging in rich dishes and other goodies including bread, champagne and chocolate. Yet she manages to stay very slim and trim the French way. "French Women Don't Get Fat" is a wonderful opportunity to look inside this chic French woman's mind and understand how she eats such delicious food, rarely visit the gym yet wears a small size. The 263pg book speaks volumes. It clearly describes how to "think" so you will make the food choices that even if indulgent support a healthy weight. And it describes how to "move" to stay slim and you don't have to go to a gym. You do not have to be in the Zone or give up carbs or fat in order to lose weight. There is no need to micromanage your nutrients. Instead you must temper your indulgences with restraint. It seems so simple - yet millions of overweight Americans don't know how to accomplish this. And with her commonsense explanation M. Guliano explains exactly how to do this. Madame Guiliano is not a doctor or nutritionist. And she has not done scientific studies to test her methods. BUT all she has to do is point to France and the millions of slim Frenchwomen who use her "methode". Madame Guiliano states she learned the process of weight loss when she gained weight after a visit to the States from her Doctor - Dr. Miracle. The good doctor taught her simple steps to achieve a healthy weight. Guiliano took his lessons to heart slimmed down and is now frequently asked how she stays so slim! One of the first steps in the program is recasting. Here you look over the food you eat and you decide what you have to have and what you are willing to eat less of or give up entirely. You also work to get the blatant sugars that create havoc with your chemistry out of your system. There is also a simple recipe for leek soup for a weekend of cleansing for those who wish to jumpstart a weight loss program. You will journal and see what areas cause trouble in your life. Other steps include eating regular meals, increasing fruits and vegetables, drinking water, not stocking offenders at home and enjoying yogurt on a daily basis. The book is really designed for those who understand the calorie concept and have a basic understanding of healthy and non-healthy foods. Though Guiliano does not get into calorie counting since she asks that you track what is causing your weight problems, it's assumed that you know that "faux" foods like twinkies are an offender whereas an apple is not. Her book includes numerous recipes including Asparagus Flan, Grilled Spring Lamb Chops, Yogurt, Baguette, Salad of Duck A L'orange and more. The book is,however, light on sample daily menus. More of what to eat on a daily basis would have been good. The book is a superb read on how the Frenchwoman stays so slim and trim! Freshness, variety, bal
Trustpilot
Copyright © 2022 Thriftbooks.com Terms of Use | Privacy Policy | Do Not Sell My Personal Information | Cookie Preferences | Accessibility Statement
ThriftBooks® and the ThriftBooks® logo are registered trademarks of Thrift Books Global, LLC