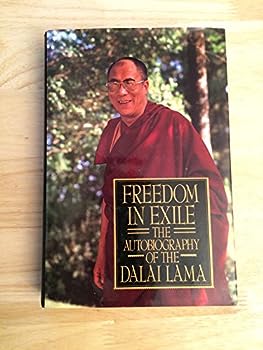 Freedom in Exile: The Autobiography of the Dalai Lama

Some believe him to be a living reincarnation of the Buddha; some despise him as a counterrevolutionary. He has charmed Hollywood celebrities and the heads of nations, while fearlessly defending his... This description may be from another edition of this product.

Published by Thriftbooks.com User , 19 years ago
Knowing nothing at all about His Holiness The Dalai Lama or Tibet/China relations I was eager to learn more. As a convert from Catholicisim to Buddhism, I was pleased to read that the Dalai Lama considers himself to be just a regular human, who was chosen to fulfill a specific role. After reading this book, you get the sense that he would be a very pleasant person to talk with. On the downside, I was absolutely shocked to read about what the Chinese Government has done to Tibet and its people. Tibet is a peace loving country and to be in the army, was the lowest form of life. A 17 point 'agreement' was drawn up by the Chinese for Tibet. Members of the Tibetan delegation were forced under duress to sign the agreement and phony Tibetan state seals were used. Large Tibetan estates were confiscated and redistributed by the Chinese. After monks and nuns were arrested, they were forced, in public, to break their vows of celibacy with one another and even to kill people.The Tibetan Freedom Fighters were no match for the Chinese army. Besides using bombers to obliterate towns and villages, the Chinese army also crucified, disembowelled, beheaded and buried many Tibetans alive. In order to prevent Tibetans from giving praise to the Dalai Lama on their way to execution, the Chinese tore out their tongues with meat hooks.It was really disheartening to read about what happened to these people. I think this is a book that everyone at some point needs to read. It really opened my eyes.

Published by Thriftbooks.com User , 23 years ago
This is by far one of the most moving and amazing books I have had the pleasure to read. The Dalai Lama has a very eloquent way of telling the story of his life. From his simple begininngs throughout the Chinese invasion of Tibet, he tells the story beautifully. His attention to detail and rememberence of people who he has met impressed me greatly. Sometimes words can fail to summarize the effect something has one you...for words lack the ability to describe the depth of compassion and sympathy I felt during and after reading this book.

A RARE RELIGIOUS LEADER - A natural and honest man

Published by Thriftbooks.com User , 24 years ago
This autobiography of one of the leading persons of Buddhism did not touch me because of deep thoughts on Buddhism - I have to read another book for that - but because this great man described in detail how difficult it was for him to live the life of a 'Holiness' when he was a normal little child e.g. struggling with his brother on the journey to Lhasa, being taken away from his beloved family, feeling lonely, sleeping in a cold palace covered with dust. He never got conceited, but felt the burden heavily of being a religious leader, serving his people in good and bad times. Besides being a Buddhist this man is a wonderful, intelligent, brave human being and I love the modesty and honesty of his autobiography.
Trustpilot
Copyright © 2022 Thriftbooks.com Terms of Use | Privacy Policy | Do Not Sell My Personal Information | Cookie Preferences | Accessibility Statement
ThriftBooks® and the ThriftBooks® logo are registered trademarks of Thrift Books Global, LLC