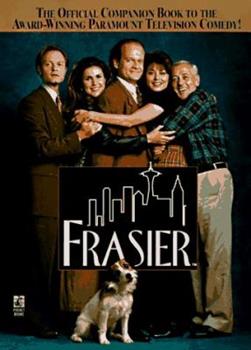 Firmly esrtablished as one of the wittiest and most original television comedy shows in years, Frasier has won a loyal and enthusiastic following. Now, in the bestselling tradition of The Friends... This description may be from another edition of this product.

This book will have you in stitches!

Published by Thriftbooks.com User , 19 years ago
I just recently got hold of this book and I must say, I'm glad I did. Thorough in every way, witty, and full of Frasier facts, no hardcore fan of the show should be without it. What I especially love about this book is that each actor is interviewed individually and gives their insights on their own characters as well as the other characters of the show. There is also a brief summary of the first 72 episodes as well as the entire script of the pilot "The Good Son" and bios of each leading cast member (even Eddie & his trainer!); not to mention lots of great photos. Frasier is without a doubt one of the most intelligent and hilarious American sit-coms ever aired and this companion book really does the show justice. Highly recommended :)

The only guide you'll ever need to the world of "Frasier"!

Published by Thriftbooks.com User , 23 years ago
The doctor is in! Welcome to the wonderful world of "Frasier", two hundred and seventy-six pages crammed full of everything you could possibly want to know about the show, the stories, the cast, the callers, the writers and the history of Hollywood's most witty and sophisticated sitcom. Pull up a couch and let me explain... This book is the official guide to the hugely successful situation comedy based around the life, loves, family and friends of Frasier Crane, a character who first appeared on "Cheers" many years ago. Meet Seattle's hottest radio shrink, Dr. Frasier Crane; his stuck-up younger brother and fellow psychiatrist, Dr. Niles Crane; his father, Martin Crane, a retired cop; his radio producer, Roz Doyle; his father's physical therapist, and object of Niles' affections, Daphne Moon; his father's Jack Russel terrier, Eddie; fellow radio personality, Bob "Bulldog" Briscoe; and even Niles' elusive wife, Maris. Sit in on "The Dr. Frasier Crane Show" at KACL, and discover the origins of Dr. Crane's calling card, "I'm listening". Take a trip down memory lane with the show's creators and learn how "Frasier" actually came to grace our screens. Get to know the people involved with the show and let them take you through "A Week in the Life of Frasier" - from first draft to final take in just seven days. Could you ask for more? Well, actually, yes you could. You also get a list of the show's "guest callers"; an episode guide to the first, second and third series; a "Frasier" trivia quiz; the entire script of the show's first ever episode, "The Good Son"; colour photographs; full biographies of the characters and the cast and a whole host of other morsels that a true "Frasier" connoisseur would just die for. This book is everything a long-term fan of the show could wish for, as well as a great way to familiarize yourself with the world of "Frasier" if you've only just discovered it. As anyone who loves the show as much as I do will tell you, when you watch "Frasier" you come to recognise and love its characters, its situations. With every episode you learn a little something about life and you grow a little in spite of yourself. And suddenly the world doesn't seem such a bad place after all. So, my advice? Watch "Frasier", read "Frasier", eat, breathe and sleep "Frasier". And save yourself a fortune in therapist's bills.....
Trustpilot
Copyright © 2022 Thriftbooks.com Terms of Use | Privacy Policy | Do Not Sell or Share My Personal Information | Accessibility Statement
ThriftBooks® and the ThriftBooks® logo are registered trademarks of Thrift Books Global, LLC