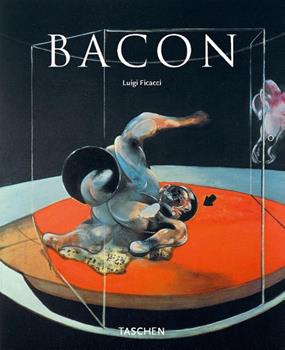 Published by Thriftbooks.com User , 13 years ago
I found this book very, very good for those wishing "to meet" the artist as I did. I didn't know anything about Bacon before but had strong decision to explore his paintings and himself as an artist. This book serve well for this purpose. It contains many illustrations, all in color but it's not all his paintings. Book covers everything mainly in chronological manner, gives overall picture of Bacon's life journey. Book is very good, maybe even best start for exploring Bacon's art. After that it's easy to orientate and dive deeper. And besides, Taschen series are really known for their good quality, at least in my mind. Personally me, I started to explore Bacon's art with exactly this book and it very impressed me. In Bacon's art I found something inspirational for myself. Taking into account Bacon art's specific features this book and Bacon art could be strongly suggested for animators, game developers, painters, concept artists who's into horror genre. But, by Bacon's own words:"I am not seeing any horror in my pictures"!

Succinct yet Inclusive Biography of Francis Bacon through his Art

Published by Thriftbooks.com User , 16 years ago
Luigi Ficacci in his Taschen book FRANCIS BACON: 1909 - 1992 has managed to give us a short survey in words about the particular genius of Francis Bacon, but at the same time presents a solid framework in which to study the primary contributions of Bacon's output by focusing on eleven of the most important works. And while the bookstore shelves have many fine expensive surveys of all of Bacon's works, this little book is a gift to the student whose pocketbook would be stretched as much as the shelf weight by those greater volumes! Ficacci's writing style is a bit dry, but his points are well made and even better related to the paintings he emphasizes. His work divides Bacon's obsessions into chapters on 'The Poetics of Bacon', 'The Expression of Horror', 'The Human Body', 'The Scene of Tragedy', 'The Portraits', and 'Sources of Inspiration'. Ficacci crowns his book with one of the finest capsulated biographies in print: each phase of Bacon's amazing career is played out in terse paragraphs as a timeline. Though Ficacci dwells on eleven paintings, this book includes fine reproductions of most of Bacon's works from the earliest to the last, with many little inclusions of works rarely seen in other books. For a superb introduction to one of the 20th century's most influential artists in a readable and affordable scale, this book is among the top choices. Grady Harp, December 05
Trustpilot
Copyright © 2022 Thriftbooks.com Terms of Use | Privacy Policy | Do Not Sell My Personal Information | Accessibility Statement
ThriftBooks® and the ThriftBooks® logo are registered trademarks of Thrift Books Global, LLC