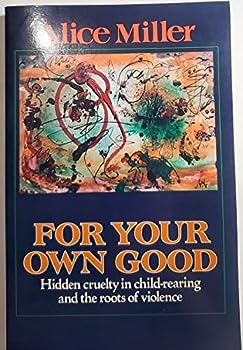 For Your Own Good: Hidden Cruelty in Child-Rearing and the Roots of Violence

For Your Own Good, the contemporary classic exploring the serious if not gravely dangerous consequences parental cruelty can bring to bear on children everywhere, is one of the central works by Alice... This description may be from another edition of this product.

Published by Thriftbooks.com User , 16 years ago
I remember reading "Great Expectations" in school and feeling a shock of recognition when the narrator mentioned that he'd been "brought up by hand." I realized I had been brought up by hand too; by the palm of the hand, the back of the hand, or whatever implement was near enough for that hand to grab and swing. After the smack or swat came the welts and the tears and then the command to "stop crying or I'll give you something to cry about." As a rule, a natural response to that pain and humiliation was not allowed. Nor was any other expression of frustration or anger. Not only did I not have a right not be physically harmed, but I didn't have a right to my feelings about either. Alice Miller's words have given me a context in which to understand my childhood experience, and to begin to look at it honestly as well as the effect it's had on my life. While I know have a better understanding of why I adopted various personal characteristics and made certain choices as an adult, her book has helped strengthen a resolve I formed as a child: that if I ever had children of my own, I would never use physical punishment on them; I would never deny them their feelings as I'd been denied mine. Today I have a three year old son who at least doesn't know what it's like to be beaten by the parents who are supposed to love and protect him, or to have his feelings and his personhood denied. I decided a long time ago that if I could help it, my children would know that there's a better way. Alice Miller's words give me hope that there is such a way, and that I might find it if I continue to pay attention.

Published by Thriftbooks.com User , 17 years ago
"For Your Own Good" is a powerful book about the inhuman, monstrous treatment of children that so many people and societies practice, accept and defend. It brings about the vital understanding that we must change how we treat our children and that we must end and abolish the violence directed against them in order to create a world without violence. It makes us realize that children are the most vulnerable, weak human beings, who need respect, love, compassion, forgiveness and mercy. It helps us see that we must take seriously our own childhood pain so that we may overcome its consequences and grow as parents. Ever since I read "For Your Own Good", about 25 years ago, I have wanted to write about the impact, which this book has had on my life. Then, within a few days, I read it twice. I felt as if my mind connected with something hidden inside of me that I had always known. This book gave me the hope that I was not born with the hopeless suffering and self-hatred that depressed me and stole my aliveness, creativity and self-confidence. It empowered me to realize what I had known all along--that the way I was treated as a child was wrong, and that the childhood pain I had endured had formed me, my mind and life in destructive, tragic ways. For the first time in my life I felt that I was not alone but as if there was someone at my side who encouraged me to look at things in my own way, to trust my feelings, my perceptions, observations, and thoughts, and to question the paralyzing obedience and blindness I had been raised with, which had eradicated that I could know and be true to myself. It was a tremendously powerful experience. I entered therapy for the first time two years later, and from then on my life changed its course profoundly. (More about that can be found on my website, especially my essay "Facing a Wall of Silence.) "For Your Own Good" opened my eyes to the abuses and cruelty that had been my childhood reality, but that I was trained to ignore, overlook and regard as "for my own good." Through reading this book, I became consciously aware of that this was not true--something I had been emotionally aware of, without being allowed and able to feel it and to think it. It described the meanness and cruelty that had filled my daily life as a child--but that I had had to perceive through my parents' eyes. Their physical, verbal and emotional attacks turned me always, and without fail, into the guilty, bad and evil one. It took many years to unburden my mind, body, and soul from these mountains of guilt I was buried under and to accept the painful reality that my family was unwilling to hear and support me. I owe my life and freedom to the clear and unapologetic insights, which Alice Miller's "For Your Own Good" provided me.

Read This Book at Your Peril

Published by Thriftbooks.com User , 19 years ago
It's a sobering thing to have the answers to the deepest questions most of us ever ask about the human condition. I wouldn't trade the insights gained from reading this book for my former uneducated "bliss," but knowing the truth exacts a price. Once you understand the `emotional physics' of how violent adults begin as violated children, violated, moreover, by the very people who are supposed to love and protect them -- you will see the results of that treatment acted out on various levels all around you, in everyone you know - for none of us have escaped being damaged on some level by abusive child-rearing practices. The `tough to live with' aspect of such insight is realizing how far too many people become either a Persecutor or a Victim, acting out the imbalance of power they were raised with - not by confronting those who first damaged them (usually their primary caregivers) but by seeking substitute targets to attack on levels from subtle (being a control freak at work and making the lives of your subordinates miserable) to grotesque (marching Jewish children into gas chambers and still being able to sleep at night.)While the entire book is horrifying in it's illumination of sanctioned, morally enshrined cruelty to children in society, it was Ms Miller's chapter on Adolf Hitler that struck the most powerful epiphany. How often in my life had I heard Hitler described as an "unnatural monster," as "sent by the Devil," as someone not human? Miller's analysis of not only Hitler but of his father's and mother's lives, how their damaged characters intersected to create the totalitarian regime that was Adolf's childhood home, sent absolute chills of knowing through me as I read: in a less virulent form, his childhood had been my own. (Dominating father who controlled everyone in the house with his moods and rages/Passive mother who was dependant on him for survival and too frightened of her husband to protect her child.) While many people have suffered this and worse, it is the intervention on some level of an "enlightened witness," Miller maintains, that gives an abused child a perspective other than the one he lives with in the abuse situation and so salvages, on some level, the value of his genuine self.Hitler's insatiable hatred clearly showed that no one was there for him in childhood; his targeting of the Jews was a way to release the pent-up hatred from a lifetime of beatings and humiliation, inflicted on him by a father he wasn't allowed to hate. ("Honor Thy Father & Thy Mother") As we all do on some level, he found a substitute target for his rage. Hitler was also a remarkably sensitive, artistically gifted child, but an upbringing filled with abuse turned his talent toward exploiting the dammed up anger in the German adults of his generation who had also been raised with loveless brutality. What a relief, after so many beatings, so much pain and coldness and inhumanity, to have someone they could hate with impunity! The six million Jews

Invasion of my soul

Published by Thriftbooks.com User , 22 years ago
Data: I am 51 years old; 2 sons, 10 and 13; married 15 years; and I have been on a path of healing and growth since 1994. I read 'Drama of the Gifted Child' 5 years ago. Since then I have read dozens of inner-work book. Lately, I had have been feeling that I have learned all I needed to know about my wounds and it was time to move on. "Time for action, not reflection," I say to myself. I doubtfully picked up 'For Your Own Good,' last week in a used book store. After all, revisiting 'childhood' issues was wasting my time.Boom! This book has invaded my soul and my heart. Alice Miller has touched on one of the greatest 'family secrets' in the world as she describes the devastating effect of 'child rearing.' (If you like John Bradshaw, Miller will touch the same raw nerve.) The hurt we pass on to our children, that I have passed on to my children, will haunt me for the rest of my days. It is so clear and so obvious once we step back and look at how we parents treat our children. I can see clearly how I dumped my frustration, hurt and pain on my kids...minute by minute, day by day. As they grow into adolescence I see all of this more clearly. While Miller's ideas, and this book, are uncomfortable for adults, she has empowered me to proceed more consciously for the rest of my life in all my dealings with my kids. For that I feel blessed. What is a mystery, as others have noted, is why Miller's simple and direct ideas have received so little welcome in our world. Instead we build more prisons, hire more police, pass more laws, and express total bewilderment at the behaviour of the children whom we have tried to manipulate, mold, and control since their births. Who is accountable here? Let any person with guts and the desire to know the real truth about who he/she is tackle this book. It WILL be painful...and it WILL be liberating.

Published by Thriftbooks.com User , 23 years ago
In her book, Miller talks about how children are brainwashed into believing that parental violence is a loving act, learn to equate hitting with love, and continue the cycle of violence with their own children. Hospitals should issue this book to every new parent. Maybe if more parents could read this book there would be fewer traumatized and battered children in our emergency rooms and psychiatric wards. A book this important should NOT be out of print.
Trustpilot
Copyright © 2022 Thriftbooks.com Terms of Use | Privacy Policy | Do Not Sell My Personal Information | Cookie Preferences | Accessibility Statement
ThriftBooks® and the ThriftBooks® logo are registered trademarks of Thrift Books Global, LLC