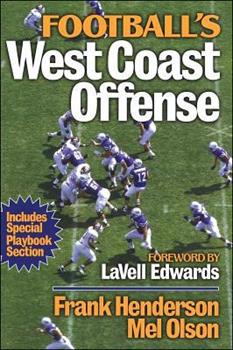 Since the 1980s, football teams have used the West Coast Offense to win championships. From Bill Walsh's San Francisco 49ers juggernaut, to Brigham Young University's record-smashing Cougars, to the 1997 Super Bowl Champion Green Bay Packers, this passing attack is a proven winner. Now you can learn the secrets of this system, no matter what level you coach. This how-to book comes packed with 244 Xs and Os diagrams and explains the pro-style attack...

Published by Thriftbooks.com User , 18 years ago
Warning to HS coaches...The West Coast Offense, like any other offense, requires a certain type of athlete at certain positions. Just as the wishbone quickly degenerates without a power fullback to draw 4 - 5 defenders at the point of attack (Bear Bryant's recommendation, not mine!), the WCO requires a QB who is accurate within a given range (in the HS environment, 30 - 50 yards accurately and consistently) and mobile, receivers who have the native speed to force DBs into a 10 - 15 yard cushion and are capable of executing the occasional deep route. You run the WCO at your own risk if you lack those athletes, with predictable results. Defensive coaches run 6 - 7 man blitzes, DBs congregate in the short zones (since they conveniently aren't forced to worry about the bomb), and unless your QB is exceptionally mobile (think young Joe Montana, Peyton Manning, etc.), you can count on him taking a pounding w/multiple interceptions, rushed throws, and sacks. Furthermore, most HS QBs lack the experience and maturity to avoid locking onto primary targets, which means that if the DBs hang in the short zones, you'll increase the opportunity for blitzing lineman/linebackers to take out the QB w/delayed throws.Offensive lineman generally have an easier time in the WCO, since they are not forced to try to move defensive lineman/linebackers through drive blocking, but instead become amateur sumo wrestlers (another warning: Pro and College lineman routinely get away with blatant holds that will result in penalties at the HS level, so if you are counting on using WCO blocking techniques like the pros, think again).The primary attraction of the WCO at the HS level is that many districts are composed of teams running offenses from the 1970s (the wishbone being the main example), and you may find success simply because your opponents aren't preparing to defend against a WCO every week.

Published by Thriftbooks.com User , 19 years ago
This book is a must read for anyone interested in learning about the West Coast offense. It goes over every essential part of this difficult-to-learn offense and gives helpful insight into the strategy. As a quarterback, it helped me a great deal in understanding the offense and my role in it. I highly recommend this book to anyone that is serious about football and learning this offense.

Published by Thriftbooks.com User , 21 years ago
In terms of best book, this is not. But it is a must read. The small chapter on how his protection works is different from Ron Jenkins The multiple West Coast Offense.(Which is a better book). But this book will increase your knowledge about the west coast offense, you can implement the offense with this book, so it's not a bad book.

a great guide for an offensive novice

Published by Thriftbooks.com User , 23 years ago
A nice overview of pro football's most popular offense. I would have liked to have seen more formation diagrams, motion charts and certainly diagrams of running plays.

Nothing fancy; far from complex; but try to stop it...

Published by Thriftbooks.com User , 24 years ago
This book proves what I've been saying for years. There is no such thing as the 'West Coast Offense'. There is nothing revolutionary, earth-shaking, or even new about throwing the football.Personal bias aside, this is a good book detailing a relatively simple system for working the underneath coverages and spreading the football around. Much attention is paid to route running. This section is rather important because the routes make the patterns work and the patterns make the offense work. Any failure at the most basic level can cause a bust. This is why we coach football.I do recommend this book for those looking to install a competent passing attack.
Trustpilot
Copyright © 2022 Thriftbooks.com Terms of Use | Privacy Policy | Do Not Sell My Personal Information | Accessibility Statement
ThriftBooks® and the ThriftBooks® logo are registered trademarks of Thrift Books Global, LLC