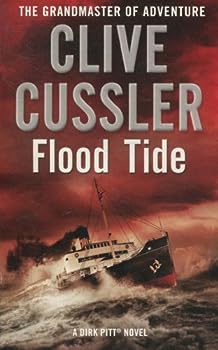 This description may be from another edition of this product. AN UNDERWATER GRAVEYARD IN THE PACIFIC NORTHWEST...A MYSTERIOUS SEAPORT IN THE LOUISIANA BAYOUS...A DIABOLICAL PLOT TO DESTROY AMERICA! When NUMA agent DIRK PITT? rescues a beautiful undercover agent...

Published by Katybug , 1 month ago
A great and fast paced book that focuses on the issues of illegal immigration and immigrant smuggling. Although the book is a bit outdated, it was written over 20 years ago so I definitely think that cutting Cussler some slack is appropriate. The action is full force and captivating. I continue to enjoy the different adventures of Dirk Pitt. Would highly recommend!

Published by Thriftbooks.com User , 21 years ago
This is my first Dirk Pitt novel and I was so very surprised by this book. A friend of mine recommended his newest book Atlantis or this one and I picked this one. CC is a great adventure writer. The book is suspense driven. I read this book in 2 days flat. It is a record for me. Don't pass this blockbuster up if you are a fans of adventure. Dirk is the classic hero who gets the girl in the end. My friend also recommended Du Brul's Charon's Landing. Don't forget a YES or NO Helpful to the review and check out my other reviews; you won't be sorry. A great story is only a click away.Great fun in reading this book I hope Atlantis is just as good.

You Can't Beat Dirk Pitt With A Stick/Gun/Bomb/Plague...

Published by Thriftbooks.com User , 22 years ago
What do you get when you cross James Bond, Jacques Cousteau and Indiana Jones? DIRK PITT, of course!! All of the Dirk Pitt books run along the same themes, but for light adventure and easy reading you just can't beat it. Who in their right mind wouldn't love a guy who always escapes the unescapable trap, foils the bad guy, finds the treasure, saves the world AND gets the girl in five hundred pages or less? And he always has such COOL TOYS...We're not talking "fine literature" here - this is pure escapism: mass market, broad appeal-type stuff. Clive Cussler has developed a winning (if a bit predictable) formula that is easy to follow and sure to please, whether you're a first-time reader or a die-hard fan (as I am). To his critics I say, "Let's see you do it better!"

Three or four stories in one nice long book!

Published by Thriftbooks.com User , 22 years ago
Dirk Pitt is one of the nicest, most interesting characters I have encountered in a long time. His pal, Al, is a great sidekick. These stories are at times slightly implausible but I disagree with the readers who feel Clive Cussler doesn't do his research. Each part of the book, from the typhoon, to the mountain and lakeside retreat, to the island off Hong Kong to the bayous of Louisiana-it's a fast-paced, interesting read. What I like best about Cussler, besides the characters, settings and descriptions is the fact he's not preachy. It's too boring, kind of like commercials, to have heavy-handed pontificating. None here! Just entertainment and escapism at it's best.

The book was great, it wouldn't let you put it down.

Published by Thriftbooks.com User , 22 years ago
The book Flood Tide, by Clive Cussler was a non- stop action mystery, with a never ending suspense. I could't put it down. The book was about a Chinese billionaire- Qin Shang- who was smuggling illegal immigrants into the country. He was doing well until the hero, Dirk Pitt, stepped into his operation. The book goes on like this, having Pitt and his partner Al Giordino incountering dilemmas, which Pitt and his partner, have to overcome. Of course, Pitt meets a girl during one of his adventures- Julia Lee who is part of the INS ( Immigration and Naturalization Service)- and almost instantly, they fall in love. I would hardly call this book trite, because it has new aspects to it. After Pitt stops Qin Shangs operation, he still has to look for the long lost liner, the Princess Dou Wan. He has to uncover the ship that was sunken in 1948, and retrieve the Peking Man. The Peking Man lived about 700,000, to 1,000,000 years ago, and is consitered priceless. I will not tell you the outcome, so you can find out for yourself. In the end Pitt and Julia live happily ever after, and plan a vacation to Mazatlan, Mexico. I would certinly recommend this book to anyone who likes action, or who can read. The only age limit I would say would be that you have to at least be 12 or 13 to read it. This is because it's long, and has a little profanity and graphic violence. Other than that, it would probably be a great book to anyone that reads it, and understands it.

CUSSLER WILL NEVER TOP THIS ONE!! HIS BEST EVER!! DELICIOUS!

Published by Thriftbooks.com User , 23 years ago
This one is it!!!!! WOW!...this is the best one since 'cyclops'...actualllly this is a rare treat since you reallllly get 3 books in one....most authors would've gotten their money's worth and done that...strung out 3 books out of this one reallllly fine one....511 pages of vintage cussler writing and i could've read another 200 pages at least!!! cussler, please keep julia around....i think it's time for good old bachelor dirk to sorta settle down a bit...and julia is it!!!! i just hope that whenever another dirk pitt movie is made that you'll consider the mac guyver tv guy....he's the one i always picture whenever i read about dirk....i completely agree with all the previous "10" rating reviews....as to the 'other' ones ...did they all read this same book????? if so, why did they bother....obviously, they're newcomers not part of the dirk pitt fan club.....hurry up with the next one....this is definitely on the top of my list!!!!
Copyright © 2020 Thriftbooks.com Terms of Use | Privacy Policy | Do Not Sell My Personal Information | Accessibility Statement
ThriftBooks® and the ThriftBooks® logo are registered trademarks of Thrift Books Global, LLC