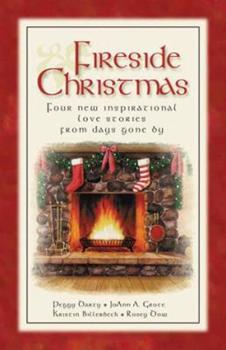 This four-in-one volume of all-new historical novellas each from an experienced authors are sure to radiate nostalgic harmony in the midst of modern holiday cheer. Includes 'Dreams' by Peggy Darty, 'Paper Roses' by JoAnn A. Grote, 'Navidad de los Suenos' by Kristin Billerbeck, and 'Eyes of the Heart' by Rosey Dow. Rekindle the emotions and memories of Christmases gone by.

4.5 stars for a very sweet book

Published by Thriftbooks.com User , 12 years ago
I was really shocked to read the one star review here. I thought the romances in this book were very sweet. And so far from being forgettable, as the one star reviewer contends, it was the fact that I remembered how much I loved the first story (Navidad de los Sueños) that prompted me to go back and read the other three stories several years later (the book got lost in the shuffle after I read just the first story). The four stories are sweet little Christian novellas, and while the Christian faith is a core part of the stories, I don't think that it overwhelms the love stories as sometimes happens with Christian romances. I especially felt the chemistry between the leads in the stories by Kristin Billerbeck, Peggy Darty, and JoAnn A. Grote. The characters were such that I just wanted to root for them to get together. Most of all, I just love, love, loved the story Navidad de los Sueños by Kristen Billerbeck. Some might say that everything works out all too neatly and coincidentally in the story, but I guess I'm a hopeless romantic because I don't mind--I like those sweet, romantic, almost fairy-tale like stories. The author ignores the realistic obstacles to a marriage between a Protestant minister and a Catholic woman from a Catholic family and Catholic culture, but the story was so well-written I didn't even notice the problem until my second reading (which I enjoyed as much as the first--a hallmark of a great romance in my opinion).
Copyright © 2020 Thriftbooks.com Terms of Use | Privacy Policy | Do Not Sell My Personal Information | Accessibility Statement
ThriftBooks® and the ThriftBooks® logo are registered trademarks of Thrift Books Global, LLC