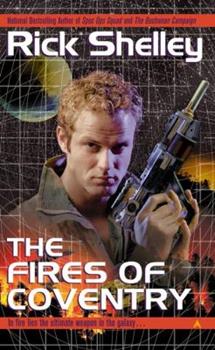 (Book #2 in the The Federation War Series)

From the national bestselling author of the DMC series and The Buchanan Campaign, The Fires of Coventry continues the saga of one manrs"s mission to liberate occupied worlds from the onslaught of an unrelenting enemyhellip; The fleet from the Confederation of Human Worlds struck the Commonwealth world of Coventry without warning. Their communication satellites destroyed and their military defenses subjugated, the citizens of Coventry are forced to...

Published by Thriftbooks.com User , 22 years ago
Rick Shelly has written another great series of books in the military science fiction genre. In his first book, "The Buchanan Campaign," you are introduced to the Second Commonwealth's Second Regiment of Royal Marines. This unit is thrust into battle against Federation troops that invaded the independent world of Buchanan. "The Fires of Coventry" continues the war between the two star spanning powers. This time the Federation strikes at Coventry, one of the Second Commonwealth's core worlds. In this book, Rick Shelley, lets the reader view war from the perspective of Coventry's civilians, ill trained weekend warriors, and the professionals of the Second Regiment of the Royal Marines. Great book, I also recommend reading the author's other two Spaceborne."
Copyright © 2020 Thriftbooks.com Terms of Use | Privacy Policy | Do Not Sell My Personal Information | Accessibility Statement
ThriftBooks® and the ThriftBooks® logo are registered trademarks of Thrift Books Global, LLC