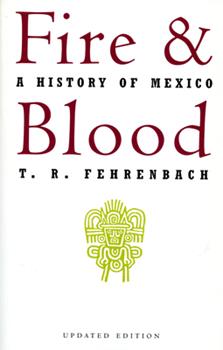 Fire and Blood: A History of Mexico

"Mexico's history is a mixture of conquest and plunder, violence and brutality, fabulous civilizations, and spectacular cultural achievements. A fascinating story."-- Christian Science Monitor There have been many Mexicos: the country of varied terrain, of Amerindian heritage, of the Spanish Conquest, of the Revolution, and of the modern era of elections and the rule of bankers. Mexico was forged in the fires of successive civilizations, and baptized...

Published by Thriftbooks.com User , 11 years ago
Product arrived quickly in excellent condition. This is one of the best histories of Mexico I have ever read, well researched, well thought out analysis. If you have any interest in Mexico and its very complex history this is the book for you.

Published by Thriftbooks.com User , 12 years ago
Powerful, well written, more like a good novel than a history. In this age of "revisionist history" written by Left leaning accademics, it is difficult to find a history of Mexico that doesn't blame the gringoes for everything. Mexico deserves better. It is a land still in cultural revolution. Rising from Spanish military occupation and the Inquisition, Mexico's future promise can be seen by careful readers of this fine book. This is absolutely the best, most authoritative, book on the subject. It's a captivating read.

Excellent Insight into the Mexican Culture

Published by Thriftbooks.com User , 14 years ago
Having traveled and lived in Mexico most of my life, I was constantly exposed to certain aspects of every day life that just didn't seem to fit with my Anglo raising. Even though I spent forty five years immersed in the Mexican Culture there were certain things I just didn't understand. T.R. Fehrenbach's Fire and Blood answered most of my life long questions. The book is a meticulously researched, chronological history of the country known as Mexico. The book gives a detailed account of why citizens of Mexico today think and act the way they do; their philosophy of life, their relationship with the Catholic Church and their attitude toward a centralized government. If you could choose one or two sentences from the book that explain one of the basic differences between the Hispanic Culture and that of the remainder of North America it is Fehrenbach's assertion that while the rest of North America was colonized by settlers and explorers, the men arriving in Mexico from Spain were "Conquistadors", conquerors. That difference is what makes Mexico the wonderful country it is today. This book should be mandatory reading for anyone considering a business venture, or currently involved in business or trade with in Mexico. The insight you will receive can not be learned in a life time of living and working in the country. The same can be said for anyone interested in living or traveling in the country. It will help relieve some of the Anglo's misunderstanding and frustrations as to why the citizens of Mexico don't "do it" like we do.

One of my ten-best reads

Published by Thriftbooks.com User , 23 years ago
This is the best history book I have ever read. It captures the Spanish influence on the Nahua (Aztec) people and vividly explains the culture and arts of the Mexican nation. Now I know exactly what Cinco de Mayo and numerous other events really mean to Mexico - and to myself. Only a glossary of Spanish and Nahua terminologies could have improved the book.

Published by Thriftbooks.com User , 24 years ago
This book is a wonderful read especially for anyone who lives or has grown up close to the Mexican border. Fehrenbach explains very clearly the long history of Mexico and the differences between Mexican and American cultures which so often make the two countries talk at cross-purposes. The only thing I would add is a linguistic dictionary, so one could pronounce all the people and places he mentions
Copyright © 2020 Thriftbooks.com Terms of Use | Privacy Policy | Do Not Sell My Personal Information | Accessibility Statement
ThriftBooks® and the ThriftBooks® logo are registered trademarks of Thrift Books Global, LLC