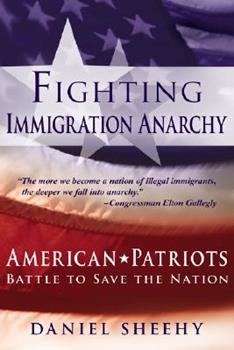 If America is to be preserved, it will be due to the brave efforts of the patriots who lead the movement to save the nation. Awakened by the revelations in the post-9/11 period on the ever-growing illegal immigration crisis, Daniel Sheehy dedicated four years to exploring America's virtual open-borders policy. The fruits of his research-Fighting Immigration Anarchy-illustrates the inspiring grassroots efforts being made by ordinary citizens taking...

This one has it!

Published by Thriftbooks.com User , 16 years ago
Fighting Immigration Anarchy is a must read for anyone who wants to learn about the impact of the illegal invasion into America and the people who are doing something about it. The book will enlighten you as to who is behind this growing problem and why they are encouraging America's ultimate demise through the enormous onslaught of unwanted masses.

Published by Thriftbooks.com User , 16 years ago
After reading Fighting Immigration Anarchy, I could not sleep for three nights. I kept thinking about all that I had learned from Daniel Sheehy's book about what is truly going on in my own backyard and in the rest of America. The book tells what our government and the mainstream media won't tell you about the seriousness of the illegal immigration crisis and how we are rapidly losing our country and quality of life. The book isn't just about what's wrong with our government's virtual open borders policy. The book mostly focuses on American citizen-activists of different races and ethnicities who have made a difference in the fight to preserve our borders and sovereignty. I have been truly inspired by these stories-I plan to get involved myself. This book has caused me to wake up and take notice!! I'm buying several more copies to give to my friends.

For the patriots of the USA

Published by Thriftbooks.com User , 16 years ago
Daniel Sheehy has written on a very important and timely subject of unchecked illegal invasion into the USA. He writes about some of our greatest patriots to keep the USA a sovereign constitutional republic. D. Sheehy takes on the subject of merging USA, Canada, and Mexico into one region. Just like the EU with an open flow of goods and people (migration and erasing our borders). I came as a LEGAL immigrant and had a medical check up, chest x-rays, small pox shot, and a criminal background check before entering. I did it the right and legal way when we were a nation of laws and I am upset that our government is allowing our nation to fall into a state of anarchy. Get involved and read this book if you care about our country, language, and culture and do it before it is too late.

An indispensable book on the immigration crisis.

Published by Thriftbooks.com User , 16 years ago
Daniel Sheehy has done a great service for interested and concerned citizens eager to come to terms with the immigration crisis that currently troubles our country. Unlike so many academic tomes that examine immigration issues as if seen through a telescope by some distant observer, Sheehy's book employs a different approach. The text shows the reader the human impact of massive, uncontrolled immigration through the eyes of concerned American citizens who finally realized that if something was going to be done, they were going to have to take the lead. The personal stories of the subjects interviewed represent a welcome and long overdue counter-weight to the bulk of mainstream media stories on the subject which all too often focus on the plight of the migrant, and too rarely on the displaced citizen. Dan Sheehy has written a book that will appeal to the literally millions of Americans who thought they were alone with their unease and were unsure how to respond. I prefer to borrow from the library most books that I read on immigration-related matters, but this one is definitely worth the price of purchase and a permanent place on my shelf.

Published by Thriftbooks.com User , 16 years ago
A year ago I moved to Mississippi from California, where I was born and spent my entire life. I watched that state turn into a cesspool because of illegal immigration, and hoped for relief when I moved to Mississippi. Unfortunately, I was shocked and angered to see how many illegal aliens are everywhere in Mississippi, even in the rural areas and small towns, and the problem is rapidly getting much worse. New Orleans, which is only 110 miles south, has been overrun with illegals, along with the Mississippi Gulf Coast. Last fall we formed an organization to fight the invasion: Mississippi Federation for Immigration Reform and Enforcement. We have had successes but have a long way to go, thanks to our corrupt federal government that refuses to enforce our immigration laws. For those of you who think illegal aliens are not a problem where you are, don't hold your breath. It's spreading to every community like a cancer. Dan Sheehy paints a very vivid picture of what is happening to our country. I urge all Americans who care about their freedoms and quality of life to read Mr. Sheehy's book Fighting Immigration Anarchy so they understand the seriousness of the crisis and how to save our nation before it's too late.
Trustpilot
Copyright © 2022 Thriftbooks.com Terms of Use | Privacy Policy | Do Not Sell My Personal Information | Cookie Preferences | Accessibility Statement
ThriftBooks® and the ThriftBooks® logo are registered trademarks of Thrift Books Global, LLC