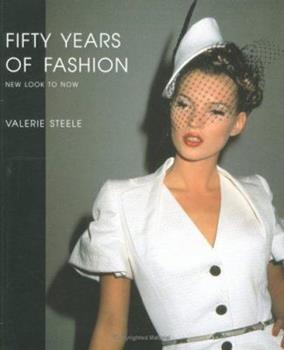 From haute couture to hot pants, from glamour to grunge, the second half of the 20th century witnessed some startling revolutions in fashion. This survey not only describes the great designers and their creations but also places clothing trends within their social and cultural contexts."

Published by Thriftbooks.com User , 15 years ago
This book takes us from decade to decade from the 50's to now with an examination of social, cultural, economic, and historical factors both setting the backdrop to and influencing changing fashions. This is an intermediate book in fashion, if you compare it to picture-only books to the other end of the spectrum where text dominates (often no pictures), and we see a treatise on aesthetic theory, anthropological roots, feminist writings, and studies on human sexuality and psychology. This book is a very light introduction to the type of questions you see in more advanced texts, but will not alienate the dilettante fashionista or costumer. The pictures provide exemplary examples of the styles discussed, and the chapters summarize everything quickly enough to have a solid overview of our recent fashion history. Again, I am sure this book will gain lots of interest, whether for browsing or seriously perusing an interest in a compelling aspect of human history and society. Check Steele's other books as well--she writes with insight, but doesn't overdo it with the dry academic stuff; she also has excellent taste with her picture selection.

Published by Thriftbooks.com User , 18 years ago
This book has both beautiful photographs and informative text. The only reason I took off one star is that I think more photographs from each designer should have been included. I especially would have liked to have seen a few more photos of clothes from American designers from the 1990s. Throughout the book, the author mostly displays clothes made by European designers. I would not have expected much attention to be focused upon American designers before 1980s or 1990s. Arguably, it was not until the 1990s that American fashion really started to influence Europe, instead of the other way around. Because this reversal of influence was such a change, I would have expected more attention to be paid to it visually. Therefore, the lack of representation in this era makes me think that American designers were somewhat shortchanged in this book. However, I agree that all the designers selected, both European and American, did heavily influence their own time periods. This book covers Post War 1940s through 1990s. In each era the author focused on a few key designers. The author chose Balenciaga, Balmain, and Dior to represent the 1940s and 1950s. The author primarily showcased Correges, Yves Saint Laurent, and Quant to represent the 1960s. Halston and Yves Saint Laurent were the focus of the 1970s era. More designers are represented in the 1980s. The book has one or two photos from Chanel, Lacroix, Blass, Herrera, Azzedine Alaia, Armani, Gaultier, Comme des Garcon, and Issey Miyake, among a few others. The 1990s are represented by a photo or two of designs from Versace, Anna Sui, Chanel, Tom Ford for Gucci, Galliano, Donna Karen, Westwood, Calvin Klein, and Prada. Just as it is the maxim for fashion in general, so is it for this book in particular...less is more. The photos in this book capture the essence of each era and the text details the stylistic atmosphere to which each designer contributed. I highly reccommend this book. Despite having access to it at the library, I plan on buying it.
Trustpilot
Copyright © 2022 Thriftbooks.com Terms of Use | Privacy Policy | Do Not Sell My Personal Information | Accessibility Statement
ThriftBooks® and the ThriftBooks® logo are registered trademarks of Thrift Books Global, LLC