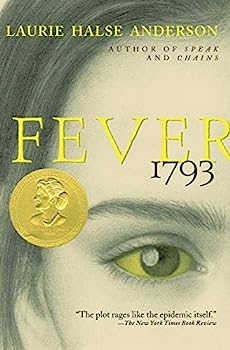 An epidemic of fever sweeps through the streets of 1793 Philadelphia in this novel from Laurie Halse Anderson where "the plot rages like the epidemic itself" ( The New York Times Book Review ). During the summer of 1793, Mattie Cook lives above the family coffee shop with her widowed mother and grandfather. Mattie spends her days avoiding chores and making plans to turn the family business into the finest Philadelphia has ever seen. But then the fever...

I Finally found it again!!!

Published by Little*Bitty , 1 year ago
I found this book at a library at school when I was fifteen. I could not put it down.....I had gotten kicked out of a party that same day I checked out the book so to speak....ha ha. I had searched for years to find this book and I bought two copies just to be safe. I have read this book so many times since and I have never gotten tired nor want to put it down. This is a great, must read, gem to have.

Published by Thriftbooks.com User , 15 years ago
Reading Fever 1793 you get so pulled into the story that it feels like you're there. Mattie Cook is the main character, but this book also circulates around her mother, grandfather, and an African American ex-slave, Eliza, who works at Mattie's mother's coffeehouse. Soon into the story, Mother becomes ill with the dreaded yellow fever, and sends Mattie and Grandfather to the countryside to avoid contamination. While away, Mattie becomes infected with the disease, but is able to outlive it. Upon returning home, Grandfather dies, and Mattie and Eliza are left to take care of Cook's Coffeehouse. As the story continues, you under stand the hardships faced, the friendships kept, and the scary, lonely feelings faced by Mattie Cook. Before I read this book, I had absolutely no idea what it would be about. I never would have guessed i would learn so much from it. I also was surprised by how real it felt, like i was there with Mattie experiencing it all. I find this book to be influential because it helped me understand how real diseases are, and how seriously they need to be taken. Life isn't forever, and sometimes people are gone sooner than you would like them to be. As i read about the death of Mattie's Grandfather, it made me think about a time when i lost someone important to me. After i had read this selection completely, it helped me to understand the past, mainly the epidemic known as the yellow fever. Fever 1793 has given me a better awareness of sicknesses, and the reality of them. The amount of shows on television and movies being made where characters die or become ill make people think that this wont happen to them, because television and movies aren't real. Although yes, they arent real, sicknesses can be. Sicknesses can wipe out nearly an entire city, like in Fever 1793. This book was very interesting, and i really enjoyed reading about the historicallity of it. Being a historical fiction, it had an air of realness, while still containing a story to be told. This book is comprised of 29 chapters, all five to ten pages in length. The lengths of the paragraphs are quite diverse. anywhere from one to 15 sentences. It is written in a simplistic way, and has a fair amount of dialogue between characters.

Published by Thriftbooks.com User , 17 years ago
Author of Speak, Laurie Halse Anderson writes her amazing historical fiction book, Fever 1793 about a teenage girl named Matilda a.k.a. Mattie who faces difficulty and fights for her life. The story is written really well and Laurie Halse Anderson does a good job making Matilda sound like a girl in the 18th century. In Fever 1793 the bonds of friendship and love is written really well. 16 year-old Matilda Cook's mother and grandfather owns a popular coffee shop on High Street. Mattie was a lazy girl with a comfortable and plain life. Her whole life changes when the yellow fever epidemic arrives in Philadelphia. Her mother caught the fever and sends Matilda and her grandfather away to be safe. They leave Philadelphia and on their way both Matilda and her grandfather catches yellow fever. So much happens like the death of Mattie's grandfather and her mother goes missing. The epidemic kills thousands of people. When winter comes the epidemic ends. The fever might have ended but the bad memories are still there. The epidemic caused Mattie to change a lot. She was a lazy girl in the beginning of the book but then she became more responsible and strong. The character shift that Laurie Halse Anderson did was really good. I had read her other book Speak and thought it was an ok book. But Fever 1973 is one of the best books I've ever read. This book was written I such a way that it is hard to put down. Anderson makes you want to keep reading. I read this book in 3 days and couldn't put it down. I never knew historical fiction could be so fun to read. Fever 1793 is written so well. I couldn't find any downside besides the fact that I thought the beginning was boring, other than that it was perfect. This book really gives you a picture of the 18th century. This book was not only fun to read but it also was educational. These are two qualities that make the book great.

Published by Thriftbooks.com User , 18 years ago
Fever is a book, which takes place in 1793, just after the American Revolution. Yellow Fever spreads throughout the cities, including Philadelphia, where Mattie Cook lives. Mattie and her grandfather flee the city, and try to escape into the country where the air is clean. They are stranded in the country after being thrown out of a wagon, and have to survive with the conditions they are living in. This book includes many thrilling, and frightening obstacles that Mattie has to overcome. It also made me think about how far we have come with medicine, and cures. Back in 1793 they thought that bleeding people was the right way to cure people of sicknesses. It turns out that bleeding people eventually kills them. We are very lucky to have the intelligence we have now.I also like this book because helped me understand what it would have been like in a 14 year olds mind when all of the chaos was happening. The book expresses Mattie's feelings and helps you understand what kind of things she was going through.I would definitly recommend this book to people 10 and older, or anyone who wants to read a book that is adventurous but factual at the same time.

Published by Thriftbooks.com User , 20 years ago
Fever, 1793 brings the sorrowful time in Philadelphia when Yellow Fever devastated the city, to life in a compelling manner. You see the sights of the ravished market,docks, and shops, smell the stench of the dead and dying, feel the despair of those waiting and watching and struggle right along with Mattie as she copes with the loss of her grandfather, the fear that her missing mother may be dead,and her determination to reach out to others and survive.Mattie's spirit brings hope and joy in a terrible time. I could not put this book down. A librarian from Bucks County

A girl fights to survive in the 1793 yellow fever epidemic.

Published by Thriftbooks.com User , 21 years ago
It's the late summer of 1793 in Philadelphia, and fourteen-year-old Mattie Cook helps her widowed mother and her grandfather run a coffehouse. Mattie resents her strict mother and dreams of expanding the coffeehouse and becoming wealthy. But her mother seems determined to find a wealthy young man to marry Mattie off to. But all of Mattie's concerns soon seem petty when an epidemic of yellow fever begins to spread throughout the city. Mattie's own mother falls ill and sends Mattie and her grandfather to stay on a farm in the countryside, where she hopes they will be safe. But they are turned away and forced to return to Philadelphia when a doctor mistakes her grandfather's cough for yellow fever. Mattie comes down with the fever and nearly dies, but is nursed back to health in a temporary hospital. But she and her grandfather return to the coffeehouse to find that Mattie's mother has vanished. They try to settle back into a normal routine, but a sudden tragedy soon leaves Mattie on her own. Now, in a world turned upside down, in a ghost city a shadow of its former self, Mattie must keep herself alive and care for a little girl orphaned by the epidemic. This was an excellant historical novel that brought to life the epidemic. Through Mattie's first-person narration, I became immersed in the daily events of her life and her fight for survival. Highly reccomended.
Copyright © 2020 Thriftbooks.com Terms of Use | Privacy Policy | Do Not Sell My Personal Information | Accessibility Statement
ThriftBooks® and the ThriftBooks® logo are registered trademarks of Thrift Books Global, LLC