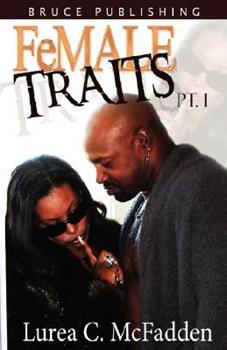 FeMALE TRAITS - the story of Grace Trufant and her playa lifestyle. She is married to a successful, loving husband but somehow she requires more attention than this fione upstanding man can offer. She... This description may be from another edition of this product.

How Slick is Slick

Published by Thriftbooks.com User , 13 years ago
Author Lurea brings a gritty tale of a woman whom is the cheater in the relationship. Meet Grace Trefant she has it all, a wonderful husband and she is the apple of his eye. Grace is not satisfied with just her husband. Grace has a boyfriend equally as fine as her husband. Only for Grace, he is her boy toy. See what happens when he puts the pressure on her to leave her husband. Grace is slick as they come, her Husband Edwin has no idea his wife is this conniving. You have to follow Grace's story to see who comes out on top. Can Grace give up one or the other? Or does she even have to? Can Grace stay one-step ahead of her husband Edwin or will he see the light? Can Grace continue to deceive all partys involve or will she get busted and it all hits the fan? Lurea does a great job in her debut novel bringing the story full circle. I love how she made Grace heartless in a sense. The author does a great job on switching the roles, as most books have the man as the main character who does all the dirt. Grace is the woman we all we love to hate. Female Traits has a wonderful supporting cast that makes this book complete. I look forward to reading more from this author in the future. SiStar Tea ARC Book Club Inc 4 star rating Female Traits pt 2 The Heifer I love to hate is back with a vengeance!!!! Author Lurea brings back the woman I love to hate Grace Trufant. Lurea also introduces us to a new couple Felicia Hubert and her husband Stacey Hubert. Grace and Felicia must have been sisters in another life as they are cut from the same cloth. Grace has had the carpet pulled out from under her. After getting busted at a party she has been left by both the husband and the boyfriend Brian. When Grace finds out that she is pregnant and can't definitively say whom the father is; she comes up with some wild schemes to have both men back in her life, the problem is both men have woman in their lives. For Grace, being a single mother is not an option. Grace is successful in pulling this off. Felicia is a woman going through a mid life crisis and decided she want her cake and eat it too. Felicia wants to leave her husband Stacey. So Felicia starts a torrid affair with a younger man. Stacey has other plans he feels it's cheaper to keep her. Stacey is a very successful business owner and doesn't want his wife to have half of his company. Felicia may have underestimated her husband's love for his company. Unbeknownst to her, her boyfriend may have something shady going on and she may have bitten of more then she can chew. Follow this couple along to see what eventually happens with them. Once again, Lurea did the damn thing. This was a great follow up squeal. This picks up right where the first one left off and has more drama and dirt going on. Lurea added some new charters that brought a new flavor to the book. She also brought back some of the supporting cast from the first book. Once again, she ties this book together very well and Stacey Hubert has ties to

Published by Thriftbooks.com User , 13 years ago
THE BOOK IS BAD, MISS THING THOUGHT SHE WAS A PLAYER AND BANG, READ PARTS ONE AND TWO IN 2 DAYS. VERY GOOD

Published by Thriftbooks.com User , 17 years ago
I READ FEMALE TRAITS IN TWO DAYS. I LOVED THIS BOOK BECAUSE I KNOW QUITE A FEW PEOPLE WHO CAN RELATE TO "GRACE" WHO IS THE MAIN CHARACTER IN FEMALE TRAITS. THIS BOOK IS A PAGE TURNER, IT KEEPS YOU WANTING MORE. WHEN I READ THIS BOOK IT FELT LIKE I WAS ACTUALLY IN THE BOOK. FOR THE SERIOUS BOOK READERS, YOU KNOW WHAT I MEAN. I FELT LIKE I KNEW EACH CHARACTER PERSONALLY. I LOOK FORWARD TO READING MORE FROM LUREA MCFADDEN. AS A MATTER OF FACT, I CANNOT WAIT. Z. KEATON
Trustpilot
Copyright © 2022 Thriftbooks.com Terms of Use | Privacy Policy | Do Not Sell My Personal Information | Accessibility Statement
ThriftBooks® and the ThriftBooks® logo are registered trademarks of Thrift Books Global, LLC