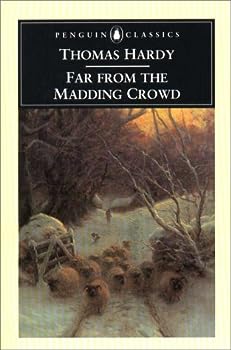 This description may be from another edition of this product. 'The first of Hardy's great novels, and the first to sound the tragic note for which his best fiction is remembered' Margaret Drabble Thomas Hardy's novel of swift passion and slow courtship is imbued...

Published by Thriftbooks.com User , 18 years ago
Over the years I've read most of Hardy's novels and decided recently to re-read the great Wessex novels in the order in which they were written. This is the first of them and Hardy's first 'mature' novel. In breathtakingly evocative language Hardy writes a paean to times he knew were changing. He is writing at a period when the old country ways are at war with the new. Bathsheba Everdene is, in her way, one of the 'new' people. And Sergeant Troy, out of harmony with the village of his birth and 'a man to whom memories were an encumbrance', is too. So one would think they were meant for each other. Hardy shows us, though, that there is something about the old ways that is worth saving; this is personified by Gabriel Oak, who is staunch like his name. His steadfastness symbolizes the old ways, the ways in which loyalty, integrity, modest ambitions and decency are lasting values. One is led to think, perhaps, in the middle of the book that the new ways will be a path out of the seemingly simple and ineffective country ways, where people live their lives by the seasons, know their rôle in their society, get along civilly with each other, all of which might seem to lead to a certain lack of excitement. When Gabriel characterizes his proposal of marriage to Bathsheba by saying '. . . at home by the fire, whenever you look up, there I shall be--and whenever I look up, there will be you', this is taken by Bathsheba as a recipe for boredom. She comes to understand with time that this sort of domestic harmony is a haven from the harms of the world.And so, while writing about changing times, Hardy also writes a prose poem about married love. He was 33 when he wrote it and ironically it was the success of this book that gave him the means to finally get married to his dear fiancée, Emma Gifford. And it launched him on a series that was to become a dominant part of his life's work.The book ends with a neat summation, quoted in the title of this review, by one of the farm laborers, Joseph Poorgrass, who proposes a perhaps unromantic means of accepting our time among our fellow-men: '. . . since 'tis as 'tis, why, it might have been worse, and I feel my thanks accordingly.'

A novel to wrap yourself up in

Published by Thriftbooks.com User , 20 years ago
I have never read a Thomas Hardy novel and so have nothing to compare this to but I found Madding to be a marvelous love story. And what is more, it's a love story that you can actually believe because the characters are so human.The protagonist of sorts is Gabriel Oak, as nice a fellow as ever there was. He falls in love with the wild and flirtatious Bathsheba (she hates her name too, I think it was meant to be symbollic, as in David and Bathsheba) Of course, she will not even consider the stoic Gabriel and thus begins a career of flirtation and romance that will end in tragedy. Throughout it all, Gabriel is in the background, helping her when she needs him, advising her when she wants it but he knows he has no chance of winning her.Gabriel's character is a marvel. Even though he is a simple farmer, he has an artistic soul, it is clear from the way he thinks about stars, sheep, even toads. It sounds corny but he is at one with nature.As for Bathsheba, I won't give away anything but let's just say she learns her lesson the hard way. Even though she is a coquette to her fingertips, you always like her and understand why three men would all find themselves in love (or infatuated in the case of one) with her.The books stately but never boring pace makes it ideal for a winter day when you are snowed in or something like that. I savoured it over a weekend and am planning to read it again.

A Fun Hardy Read? It Exists

Published by Thriftbooks.com User , 20 years ago
I've always condidered myself to be sort of an optimist; so it is really odd that I've always really loved Thomas Hardy's books. I count Tess of the D'Urbervilles and Jude the Obscure among my very favorites, and whether or not it is my favorite, I think that The Mayor of Casterbridge is marvelously written. Still though, reading all of that fatalism and cynicism can be a little much. It was really nice to pick up this novel and not read so many grim scenes. Far From the Madding Crowd is a pretty simple love story driven by the characters. First, there is Bathsheba Everdeen. She's vain, naive, and she makes the stupidest decisions possible. Yet, you still like her. Then there are the three guys who all want her: Troy who's like the bad guy straight out of a Raphael Sabatini novel, Boldwood who's an old lunatic farmer, and Gabriel Oak who is a simple farmer and is basically perfect. The reader sees what should happen in the first chapter, and it takes Bathsheeba the whole book to see it. The characters really make the book. The reader really has strong feelings about them, and Hardy puts them in situations where you just don't know what they're going to do. The atmosphere that Hardy creates is (as is in all of Hardy's novel) amazing and totally original. I don't think any other author (except Wallace Stegner in America) has ever evoked a sense of place as well as Hardy does. Overall, Far from the Madding Crowd is a great novel. I probably don't like it quite as well as some of his others, but I still do think it deserved five stars.

Published by Thriftbooks.com User , 24 years ago
Want to leave for England without ever heading for the airport? Well, Hardy's "Far From the Madding Crowd" is for you. Hardy brilliantly portrays England and creates his imaginary town of Wessex, England. While reading, you'll notice the rolling hills and the bright green pastures that only England has to offer. Scenery is not the only element Hardy invents, his characters seem to live and breath just as you and I. They are so much alive, in fact, that you feel like shaking Bathsheba into making her realize that Gabriel Oak is the only one for her. However, like all of Hardy's novels, they include dispair, hatred, and love. "Far From the Madding Crowd" has an interesting twist though! Unlike most of Hardy's works, "Far From the Madding Crowd" ends happily, but only after much dispair and feelings of hopelessness.
Copyright © 2020 Thriftbooks.com Terms of Use | Privacy Policy | Do Not Sell My Personal Information | Accessibility Statement
ThriftBooks® and the ThriftBooks® logo are registered trademarks of Thrift Books Global, LLC