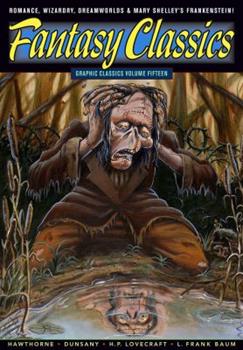 (Book #15 in the Graphic Classics Series)

Here there be Monsters and Wizards

Published by Thriftbooks.com User , 13 years ago
Tom Pomplun and the Graphic Classics team just keep getting better. This latest release is another anthology collection, bringing us some of the more obscure tales from famous authors like L. Frank Baum, as well as the grand slam home run of Mary Shelley. I love these anthology collections the best, for the chance to be introduced to some new authors as well as seeing adaptations of some of my favorite yarns. "Fantasy Classics" is a good mix of long and short stories, with two major tales peppered with short poems and stories on a theme. There is no "High Fantasy" here, no knights or dragons, and perhaps "Fantastical" would be a better term. But no matter what you want to call it, there is some great stuff here. This edition includes: "After the Fire" - A short poem by Lord Dunsany, the man who was the inspiration for HP Lovecraft and all of the weird fiction authors to follow. Rachel Masilamani's illustrations cement the Lovecraft-connection with writhing tentacles. "Fantasmagoriana" - A recreation of the famous ghost story competition that gave rise to one of the most famous monsters of all time. Lord Byron, Percy Shelley and Mary Godwin all come to life in illustrations by Mark A. Nelson that resemble Victorian prints. "Frankenstein" - The Monster in question appears, in a long 47 page adaptation by rod Lott. Skot Olsen interprets the tale with a delightful Gothic-cartoony feel that balances sympathy for the monster with its horrible nature. "Rappaccini's Daughter" - Nathaniel Hawthorne is one of my favorite authors, and someone who really deserves the Graphic Classics treatment. This is a text-and-pictures adaptation telling the story of a sort of mad wizard of Science, his beautiful daughter, and the foolish man who loves her. Beautifully adapted by Lance Tooks, my favorite of the Graphic Classics artists. "The Glass Dog" - L. Frank Baum, best know for his Oz series, did other tales too, like this little yarn of a wizard who cares nothing for money, and a lonely glass blower who cares for little else, unless it be for the love of a bitter shrew. The two strike a bargain, and we get a funny tale of questionable morals. Illustrated by Brad Teare, it has a great scratchy feel that compliments the story. "The Dream Bridge" - A short poem by Clark Ashton Smith and illustrated by Evert Geradts, It is a fanciful whimsy. "The Dream Quest of the Unknown Kadath" - This is a new adaptation, different from the previous Graphic Classics adaptation. The second long yarn of the book, 47 pages, illustrator Leong Wan Kok takes us on a bizarre tour through Lovecraft's dreaming realms. It has the proper nightmarish feel, gugs and all.

An invaluable introduction to the worlds of fantasy

Published by Thriftbooks.com User , 14 years ago
Volume fifteen in the Graphic Classics series, Fantasy Classics is an anthology of black-and-white comic adaptations of timeless fantasy (and horror) stories by great literary authors. Each adaptation is illustrated by a different artist with a fiercely individual style. The adapted literature selections are "After the Fire" by Lord Dunsany, "Fantasmagoriana" (a prologue to Mary Shelley's Frankenstein, telling of a creative exchange of ghost stories Shelly once had with fellow writers), "Frankenstein" by Mary Shelley, "Rappaccini's Daughter" by Nathaniel Hawthorne, "The Glass Dog" by L. Frank Baum, "The Dream-Bridge" by Clark Ashton Smith, and "The Dream Quest of Unknown Kadath" by H.P. Lovecraft. The resulting compilation is highly recommended as an invaluable introduction to the worlds of fantasy, wizardry, and dreaming that took root in humanity's collective psyche well before "The Lord of the Rings" established certain tropes as mainstream. Due to mature and often tragic themes, Fantasy Classics is recommended for readers who are at least twelve years of age. Diane C. Donovan California Bookwatch

Published by Thriftbooks.com User , 14 years ago
Eagerly anticipated, my copy of Fantasy Classics arrived in the mail today, and I was not disappointed. From the Mark A Nelson Frankenstein cover to the fantastic 'Dream Quest of Unknown Kadath', this just may be editor Tom Pompluns' strongest book to date. Just how does fantasy rise from the imaginations of international writers? "Fantasmagoriana" answers that question as Shelley, Byron,Godwin, Claremont and Polidori pose the challenge of Fantasmagoriana-German ghost stories and the creation of ghost stories that rainy evening. Frankenstein, illustrated by Skot Nelson, is not the Universal standard version, but rather an exaggerated, almost caricturized monster entirely suitable for the story. I loved this telling of the man made monster classic. Rappacini's Daughter is enchanting. The Glass Dog (by L Frank Baum) is delightful, and a hidden treasure from the overlooked author of the Wizard of oz series. "Dream Quest" by Lovecraft is a cool exploration of the dream worlds we all have, yet are afraid to enter. There's no place like home could be an apt summary of the adventure, yet there is so much more to the Lovecraft piece. As I said before, this may be the best edition yet. But, having read all of the books from Pomplun so far, I doubt it! Www.graphicsclassics.com Tim Lasiuta
Trustpilot
Copyright © 2022 Thriftbooks.com Terms of Use | Privacy Policy | Do Not Sell My Personal Information | Accessibility Statement
ThriftBooks® and the ThriftBooks® logo are registered trademarks of Thrift Books Global, LLC