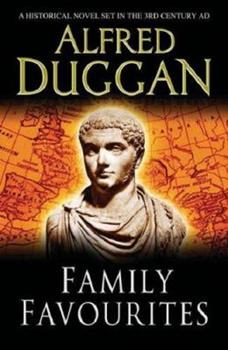 Named after the Syrian Sun god, Elagabalus at only 13 years old led his army to victory and became Emperor of Rome. He was a god-like young man: strong, beautiful, charming, and beloved of his soldiers. But when he rose to power, Elagabalus rejected his family's influence and they, like the Senate, became his deadly enemies. With his customary elegant writing, esteemed writer Alfred Duggan draws us into the tale of this unusual and outrageous leader...

What a pleasure this is back in print

Published by Thriftbooks.com User , 14 years ago
I'm delighted that the books of Alfred Duggan are back in print after so many years and I'm particularly happy that Family Favourites is once again available. This was my first introduction to Duggan's wonderful, cynical style. I originally found this book in a used book store in Guadalajara, Mexico of all places and it's falling apart due to so many re-readings, so it's time to buy a new copy. Briefly, this book tells the story of the truly bizarre teenage Roman emperor Elagabalus, told from the viewpoint of a Roman soldier named Duratius who happens to find himself as the emperor's bodyguard. Duratius' story itself is very interesting. He's a minor Gallic nobleman who's family is destroyed in one of Rome's many civil wars. He joins the army because it's the only option for his survival and only wants to keep a low profile but through a single, out-of-character moment of leadership finds himself elevated to the new emperor's inner circle. From this vantage he watches the goings on in court. And what a court it is. The young emperor is truly a rare bird. He's the high priest of an eastern cult, a flamboyant homosexual (scandalizing proper Roman society) and wholly unsuited for his job. His only claim to the throne is the dubious assertion that he is the illegitimate son of the murdered (and monstrous) emperor Caracalla. His beauty and charm get him through his first couple of years but he eventually wears out his welcome. This is a problem for the powerful women of his family, his mother, aunt and especially his formidable grandmother. They must find a way to keep power (and their lives) as Elagabalus' authority dissipates. Through it all Duggan's wit and cynical view of human nature entertains the reader. His characters are sharply drawn and his dialogue crisp. Any lover of historical fiction will love this book.
Copyright © 2020 Thriftbooks.com Terms of Use | Privacy Policy | Do Not Sell My Personal Information | Accessibility Statement
ThriftBooks® and the ThriftBooks® logo are registered trademarks of Thrift Books Global, LLC