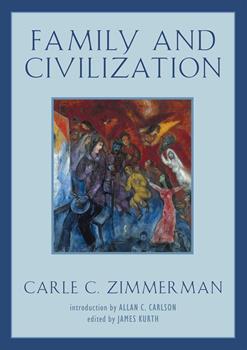 Family and Civilization is the magnum opus of Carle Zimmerman, a distinguished sociologist who taught for many years at Harvard University. In this unjustly forgotten work Zimmerman demonstrates the close and causal connections between the rise and fall of different types of families and the rise and fall of civilizations, particularly ancient Greece and Rome, medieval and modern Europe, and the United States. Zimmerman traces the evolution of family...

"Abridged" it says in very fine print on the back cover.

Published by Thriftbooks.com User , 12 years ago
We learn from other readers' comments that it has been distilled from 800 pages down to 200. There are some significant flaws that could and should have been fixed in this heavy-handed editing. Despite all that, the gems of thought in this book are bright enough to shine through some plodding and repetitive prose. Zimmerman describes a universal progression of family organization from the "trustee family" through the "domestic family" and finally the "atomistic" family" in three separate eras: classical Greece, Rome, and contemporary Western civilization. In the broadest terms, in a "trustee family" the current generation is seen as only a trustee for an entity that exists for all time. The trustee family fills the roles that will be taken over by the church and state at higher levels of civilization. Specifically, the trustee family administers its own justice, fights its own wars, and keeps family members in line. Trustee families existed until recently in the feuding Kentucky hills, and they are our plague as America fights in Afghanistan and Iraq. The "domestic family" is the bedrock of traditional civilization, a mother, father, and children who view themselves as integral parts of a civilization: church, state, civil society, and a family structure. The key feature of a domestic family is a commitment to bearing and raising children. The motive may be somewhat economic -- children are certainly useful in an agricultural setting -- but it is equally religious. The parents of a domestic family feel an obligation, usually religious, to bear and her children, and the society reinforces the message that children should obey their parents. The church's call is to "proles, fides, sacramentum" or children, fidelity, and the sacred. Zimmerman goes on at length about the ways in which the Protestant Reformation, the counterreformation, the Enlightenment and then the English, French, and Russian revolutions undermined the domestic family. The "atomistic family"evolves when civilization reaches a high plateau, in which a wealthy, literate class emerges. These intellectuals are skeptical of received wisdom, especially religion, and dedicate themselves to the pursuit of individual pleasures. The morality which held the domestic family together comes to be held in contempt. The individual reigns supreme, and the traditional constraints on divorce, abortion, adultery, homosexuality, all forms of what is otherwise considered sexual but privately, and of course childlessness fall away. The worthier citizens feel they have better things to do with their time than raise children, and the society has to depend on immigration and the fertility of minorities to replenish itself. The move from country to city is part and parcel of the transition from the trustee family through the atomistic family. The apparatus of government works best in urban environments. Children are an outright burden -- they cannot help support the family, and they co

Wisdom from the ages

Published by Thriftbooks.com User , 13 years ago
A superb survey of the family across history. I understand the full multi-volume edition is still out of print, but this abridged version is plenty scholarly, and very readable. It's important to remember while reading that this was written in the 1940s - and to realize how many of his predictions have come true!

Half a century later, this book is amazingly relevant

Published by Thriftbooks.com User , 14 years ago
Prescient in its vision, "Family and Civilization" should be required reading for all who wish to understand the main cause of the rise and fall of civilizations.

The Rise and Fall of Western civilization?

Published by Thriftbooks.com User , 14 years ago
If the book premise that family ties are what holds society together doesn't particularly float your boat, the trip through history from Greece and Rome till now is the best I've seen. A GREAT read for Western historical and cultural evolution and a MUST read for social conservatives.
Trustpilot
Copyright © 2022 Thriftbooks.com Terms of Use | Privacy Policy | Do Not Sell My Personal Information | Cookie Preferences | Accessibility Statement
ThriftBooks® and the ThriftBooks® logo are registered trademarks of Thrift Books Global, LLC