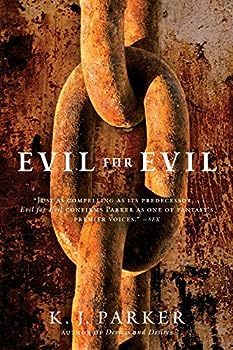 (Book #2 in the Engineer Trilogy Series)

This description may be from another edition of this product. The engineer Ziani Vaatzes designed and built a war. Thousands died as a consequence of his elaborate plan. The civil servant Manuo Psellus took the decision that started the war. The very foundations...

Worthy 2nd installment if you like this sort of thing.

Published by Thriftbooks.com User , 11 years ago
If you read the first book in this series, there is no need for me to talk about the storyline. Your question now is, is the 2nd book worth it? Well - this is kind of like the 2nd of a 3 part miniseries that just makes things worse. I liked the vernacular used. I like the characters because they do continue to evolve, the character development is multi-dimensional and the author tells a good story. Sometimes the descriptions didn't seem to be inline with the way the characters thought ( engineer-speak when the character's POV is a hunter's mind. There is a mixture of 3rd person with some omniscient qualities, the change isn't always apparent but it fits my style of reading anyway. Everything means something. I was surprised how carefully thought out the foreshadowing was done. I enjoy that you can think about the characters, come to conclusions, and see if your hunches come true. Well done. I'm looking forward to the final installment, an enjoyable read.

Middle book. Still cold. Moving on to the third.

Published by Thriftbooks.com User , 13 years ago
For every developer sitting at his or her desk, wondering if there was every going to be a moment where their native brilliance would be recognized by the Company-- For every engineer passed over for a salary rise in favor of a stuffed shirt manager-- For every unrecognized genius who lies in the dark thinking that someday they are ALL going to pay-- For all of you, this book's for you. The story of the engineer Ziani Vaatzes is a trilogy for everyone who is able to make plans while those around them are seemingly only able to react. The plotting of a single man brings down the walls of nations. Love abounds, but is clearly more of a force for chaos and destruction than of poetry and healing. The God of this world is a machine. I was on a knife's edge after reading Devices and Desires, the first book in the Engineer trilogy. I found it cold and bleak, but laced with surprising bursts of warmth and humor. I didn't like most of the main characters, but I accepted that I wasn't really meant to like most of the main characters. I really was glad that I read it, and I had both hopes and fears about what Evil for Evil was going to bring. I have to confess, I am marginally less glad that I read Evil for Evil. I am beginning to find Vaatzes' nearly omniscient planning grating. I kept hoping for his demise because I have the feeling that I actually might be interested in the other characters if they can get out of his game somehow. The way the story goes is starting to feel a little bit predictable to me. At least in the sense that even if I do not know where the book is going, exactly, I kind of have the feeling that I know how it is going to get there. The tone feels as though it is going to be consistent, and I find that too bad. Not sure if that really makes sense. I'm still going to read the third book, but I'm not going to be nearly as enthusiastic as I was about the second. Things you should know if you are considering buying this book: You can't read this separately from Devices and Desires. Begin at the beginning of the trilogy, as this is more like one long book than it is three separate novels. This isn't the most violent of fantasies, but is rather surprisingly adult. Sexual violence is both implied and described. I would be wary of this book in the hands of younger teens.

the character ziani vaatzes, is

Published by Thriftbooks.com User , 13 years ago
so repulsive at this point in the story i have come very close to putting down the trilogy all together. i have taken to reading over the parts written involving his character and imagine exquisite,painful tortures done to him. the war could go on,but this character i have come to loathe. maybe i will get my reward for trudging through the many accounts of his treachery in ' the escapement'. obviously, this is an engrossing and imaginative thriller,hard to put down and almost impossible to leave.

Intricate, multifaceted, and still way over the top of the stratosphere

Published by Thriftbooks.com User , 14 years ago
The Mexentine army found the invasion of Eremian easy; they won the war without much resistance. However, the occupation is another matter. Insurgents like that led by Miel Ducas, who prefers resistance liberators, is causing problems for the occupiers. Their solution is to take it out on the common people as killing them is easy and the Mezentines are quite proud of their ability to kill and destroy. Walled cities like Civitas Vadanis cannot survive the onslaught. It's leader Duke Valens is troubled with how to save his people; fleeing seems the only responsible solution, but that will leave many dead even if the enemy army fails to find them, an unlike outcome. Of course there is that insane exiled Mexentine engineering genius Ziani Vaatzes, whose killing machines frighten even his vicious people as they are weapons of mass destruction; his latest one may be capable of destroying the world or protect a city from invaders. He is joined by another engineering genius Daurenja in a partnership that means hell for everyone else. Meanwhile the worlds a stage for all the key players are coming together in holy matrimony and other stately alliances that foster betrayals caused by love and worse emotions. The first Engineering tale (DEVICES AND DESIRES) is a complex somewhat convoluted thriller; however book two, EVIL FOR EVIL, makes the predecessor look like a simple Dick and Jane adventure as the plot has become even more complicated. The above is too simplified of a description of all the goings-on as the key players return still filled with a gloom and doom inevitable outlook. K.J. Parker uses satire and humor to expand the plot; for instance the Mexentine people and its bureaucracy ironically remain disengaged from their war fighters except for the technology sector. Intricate, multifaceted, and still way over the top of the stratosphere, fans who read the first Engineer's tale will appreciate the middle segment and look forward to how K.J. Parker ties together the antics of a cast that act like some sort of DNA blending of Rove, Machiavelli, and Rumsford. Harriet Klausner
Copyright © 2020 Thriftbooks.com Terms of Use | Privacy Policy | Do Not Sell My Personal Information | Accessibility Statement
ThriftBooks® and the ThriftBooks® logo are registered trademarks of Thrift Books Global, LLC