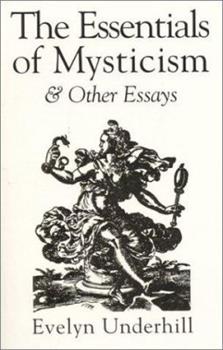 The Essentials of Mysticism and Other Essays

This new collection of essays offers an introduction to one of this century's foremost writers on mysticism. This volume considers in depth the ordination of women, the promotion of social reform, and ways of providing an enlightened education for our children. The authors practical approach to living the spiritual life is also illustrated in her essays on prayer and contemplation. This book forms part of Oneworld's mystical classics of the world...

Published by Thriftbooks.com User , 12 years ago
A collection of nine essays on mystics from Plotinus (the last great philosopher of antiquity) to Charles Péguy who died in the First World War that was published in 1920. The essays are not consistent, having been written over many years and collected here. She recognizes the importance of Plotinus who had a tremendouns impact on early Christian belief and Christian mysticism over a much greater period of time, through the agency of St. Augustine. Augustine, in turn discovered Plotinus throigh the translation by Victorinus from Plotinus' crabbed Greek into Latin. Like all Christian commentators on Plotinus,who founded NeoPlatonism, she cannot help scolding Plotinus for not being a Christian. It is difficult for her to get all the mystics, from orthodox Jews, the Sufi,the Christains and the NeoPlatonists under one tent, so she is clearly tempted by the "somewhat heretical" teaching of John Erigena that there is a "supersubstantial God " above the Trinity. She has an annoying habit of quoting the writings of her subjects in the original Italian/French/Latin. Despite being somewhat confused and confusing, Underhill's book is important in any attempt to understand the phenomenon of mysticism. Mystical phenomena are, after all, the only experimental evidence we have for the existence of God. It should not be necessary to point out that mysticism, in motu proprio, has nothing to do with "The New Age. "

Published by Thriftbooks.com User , 21 years ago
this classic in the field of spiritual experiance came into my possession twenty-five years ago and has been a continual companion on my path. in my estimation this is priceless book and i'm overjoyed to find it reprinted. my suggestion to anyone that is fortunate to read it is to look again at LIGHT as the underlying theme of the book. you will be rewarded!
Copyright © 2020 Thriftbooks.com Terms of Use | Privacy Policy | Do Not Sell My Personal Information | Accessibility Statement
ThriftBooks® and the ThriftBooks® logo are registered trademarks of Thrift Books Global, LLC