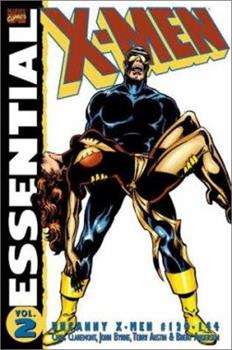 by John Byrne and Chris Claremont

Ever expanding their ranks the Children of the Atom combat the evils threatening both mutants and humans -- like the Brotherhood of Evil Mutants the Hellfire Club and Dark Phoenix Collecting: X-Men... This description may be from another edition of this product.

Published by Thriftbooks.com User , 17 years ago
Essential X-Men Volume 2 is essential reading! This volume contains the classic Marvel Comics run of the Phoenix Saga. These issues lead to the death of one the most beloved X-Man in the comics, Jean Grey. Chris Claremont wrote a powerful story on how the Phoenix force turned evil and she tried to destroy the Uncanny X-Men and the Marvel Universe! The artwork was done by John Bryne. The set collects Uncanny X-Men #120-144. Buy it! Highest Possible Recommendation. The only problem with this paperback edition is that it's not in color. If you want to see the Dark Phoenix Saga in color, I suggest you look for the actual comics and the old X-Men: Dark Phoenix Saga trade paperback.

The fateful Dark Phoenix saga of Claremont and Byrne

Published by Thriftbooks.com User , 19 years ago
It was nice to see that inker Terry Austin was credited on the cover of "The Essential X-Men Volume 2" along with writer Chris Claremont and pencilers John Byrne and Brent Anderson. Of course, Byrne is also the co-plotter for most of these issues and Anderson only draws one of them, so it is not like all names are created equal when it comes to such things. But Austin was always the best inker of Byrne?s pencils and deserves some of the credit for making "X-Men" the premier comic book of its day during this particular run of issues from #120-144. As the cover shot indicates, this particular collection of stories is highlighted by the Dark Phoenix saga and the "death " of Jean Grey. It was the controversy over the latter that was partially responsible for Byrne?s decision to leave the book, which came from Editor-in-Chief Jim Shooter's dictum that superheroes never kill anybody. In issue #135 "Dark Phoenix," Jean Grey's alter ego goes over to the dark side and jets off into space to find something to eat, which ends up being a G-Type star. The problem is that of the eleven planets in that system the fourth is inhabited by an ancient, peace-loving civilization hitherto known as "the Asparagus people." The bottom line was that in the super nova that resulted 5 billion beings died; at which point Dark Phoenix took out a Shi'ar warship as well. The consequence of this was a trial in the count of Lilandra; originally Claremont and Byrne intended for Jean to have the Dark Phoenix entity psychically removed, leaving her a mere mortal who had to live with the great guilt of what she had done. The idea was that down the road Magneto would offer her the chance to regain her power and in a moment of great triumph she would refuse. But Shooter decreed otherwise and the new ending was that issue #137 "Phoenix Must Die" now became a literal fate. I have always been of the mind that Shooter was not just wrong but stupid; following the simplistic rules of 1940s superhero comic books is shortsighted. Eventually Marvel comics would deal with a superhero forced by circumstances to kill: Captain America, without his shield, gunned down a guy with a machine gun who was shooting a crowd of civilians. Even Superman had to take some lives and live with the consequences. Claremont and Byrne had come up with a serious storyline and Shooter threw it away on a simplistic principle. This Volume 2 collection represents the high point of the "X-Men" comic book, not just because of the Dark Phoenix saga, which is still pretty good even with the altered ending, but because we have the Canadian government's attempt to bring back Weapon X (a.k.a. Wolverine), an encounter with Arcade's Murder World, a showdown with Proteus, and a lengthy fight with the Hellfire Club. Kitty Pride also joins the X-Men at this point in their history and one of my all-time favorite stories is issue #141 "Days of Future Past"/#142 "Mind Out of Time" when the Kitty Pride of a dystopian fut

Published by Thriftbooks.com User , 21 years ago
the good: picking up from where vol. 1 left off, this offers another 20+ issues of continuity. And what a collection of stories!! chronicled within are x-men battles with Alpha flight, Arcade, Proteus, Hellfire Club, Wendigo, Sentinels. This collection is significant because it includes epics such as the "dark phoenix saga" and "days of future past". IMHO, the most moving story was "Elegy" in which Cyclops recounts his memories in the aftermath of Jean Grey's death. A bonus is the introduction of Kitty Pryde - who eventually proves her mettle in her encounter with the Ngarai demon. FYI, you can purchase the "dark phoenix saga" and "days of future past" stories separately (F/C graphic novels) but you should still also buy this volume. Claremont's writing and Byrne's artwork is outstanding!the bad: wish it was in colour!!!

Essential X-Men is a must-have for anyone who likes X-Men.

Published by Thriftbooks.com User , 24 years ago
This incredible book contains 25 consecutive issues of The Uncanny X-Men from 1979-81. Included in this collection is all of The Dark Pheonix Saga and The Days of Future Past. Essential X-Men brings back memories of the glory days of the X-Men and marvel comics, and I reccomend this book to anyone. The only downside is the book is in black and white.
Trustpilot
Copyright © 2022 Thriftbooks.com Terms of Use | Privacy Policy | Do Not Sell My Personal Information | Accessibility Statement
ThriftBooks® and the ThriftBooks® logo are registered trademarks of Thrift Books Global, LLC