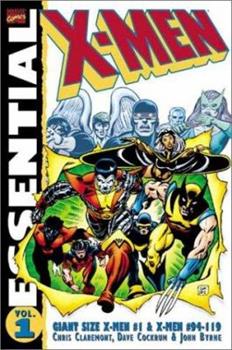 Born with extraordinary powers and abilities, these mutants were gathered by Professor Charles Xavier to protect a world that hates and fears them. '

Published by hipower , 1 year ago
First off, as a long time X-Men Fanatic, I was disappointed in the condition. This is not a Very Good condition product. Looks horrible. Secondly, it's in black/white format. That wasn't in the item description when I ordered. This is not what I would recommend to a collector trying to reconnect with the great stories and artwork of the Second Generation X-Men Reboot. The front cover color art is great. But saddens one to see the black and white inside.

Published by Thriftbooks.com User , 16 years ago
I missed out on comics as a kid. It wasn't that I was denied them, I just wasn't very interested, being more of a book kid. Oh, I read a few, but very few of the sort of comics you probably think of when you think of comics. I read all the Tintin and Asterix books, for instance, and collections of Peanuts comics were among my favourite books, and still are. But as for American 'comic magazines', my only experience of them was a stack my grandparents once bought for me from a book exchange for a couple of dollars. Of those, I have vague but fond memories of some early 70s Batmans, and of what I presume were reprints of the famed EC horror comics. And I remember some fairly improbable claims about sea monkeys and X-ray glasses. But otherwise, my knowledge of comics is pretty much limited to what I've picked up on the Internet, where my interests often seem to bring me into contact with comics fans. So comics are a gap in my pop culture knowledge that's been bugging me for a few years. Hence, when I saw these 'Essential' books going so cheap I bought one, picking the X-Men because I liked the movies. The 'Essential' series collects consecutive sequences of old Marvel comics, in cheap, poorly-made, monochrome editions, printed on thin grey paper like newspapers used to use, and with cheaply-glued covers that are likely to fall off within minutes (mine did, and I'm a careful handler of books). In other words, you probably won't be able to pass this down to your grandchildren unless you already have some. They are, however, cheap enough for some harmless ("Approved by the Comics Code"!) entertainment, or to satisfy your idle curiosity about what kind of things American comics are (or were). A fan would probably prefer a book that reprints the comics with their original colour, on nice white paper, properly bound. And such books are available, for a price. The comics collected here are not, as a neophyte might expect, the first issues of the X-Men comic. Those were published in 1963 (yes, I've done some research), with a cast consisting of Professor X, Cyclops, Jean Gray -- who we new readers know from the movies -- and the less familiar Beast, Iceman (a minor character in the movies), and Angel. (Unlike the other X-Men, Jean Gray's superhero name isn't used in the movies, and in this book we discover why -- it was 'Marvel Girl'.) Later, Havoc and Polaris were added to the cast. The comic was cancelled in 1969, after 93 issues. The first 20-odd issues are available as Essential Uncanny X-Men. The comic was revived in 1975 with a partly new cast, more closely resembling that of the movies. Essential X-Men Vol. 1 collects the first 27 issues of the revived comic. The first, Giant Size X-Men #1, introduces angry Canadian secret agent Wolverine, Russian farmboy Colossus (seen briefly at the start of X-Men 2), German circus performer Nightcrawler, angry Native American Thunderbird, Irish screamer Banshee, and African goddess Storm. It's something of a

Published by Thriftbooks.com User , 17 years ago
If the word 'ESSENTIAL' is printed on any book, it had better be good, or it can simply waft over to the world of movie lies where Jan DeBont and Stephen Sommors live. But thankfully like the Spider-Man Essentials this is an extremely satisfying comic collection that chronicles the history of Wolverine, Xavier, Storm, Nightcrawler and the rest of the mutants. Both revealing just what a groundbreaking concept the comic was and showcasing some fantastic artwork, Stan Lee's X-Men comics are just fantastic, I love all these comics, perhaps too much, my bookshelves agree. But this is definitive, must-buy material. Exciting stories, gripping bad guys and some amazing twists, this is a masterpiece that deserves all the plaudits it gets. With a starting point like this, it's clear to see why the comic has endured some shaky times and an uncertain future. Kudos Stan Lee, kudos.

The "Second Genesis" of the Uncanny X-Men

Published by Thriftbooks.com User , 19 years ago
I greeted the new and improved X-Men with less than open arms. I had been a big fan of the original Uncanny X-Men, which had gone out in a blaze of glory with comics drawn by Jim Steranko and Neal Adams. When Chris Claremont and Dave Cockrum revived the title in 1975, after "X-Men" had been reduced to a reprint comic, I was not overly thrilled with the decision to jettison most of the original group. If Cyclops had not stayed then I might have given up on the title right then and there, but this was the old days when you could still buy every title in the Marvel universe for about five bucks (remember, this was when you could fill up your car and get change back on a $5 bill). So I stuck around and saw how Claremont, Cockrum, and John Byrne turned the "X-Men" into one of the premier comic books in the land.The original strength of the X-Men was that their being hunted mutants served as a subtext for various issues involving social prejudice. Claremont and Cockrum put that in an international context by having Professor X go around the world to recruit his second generation of merry mutants recruiting from the mountains of Kenya to behind the Iron Curtain. This time around we find not only that the X-Men are no longer all white, they are also not all as young as before (Banshee qualifies more as a contemporary of Charles Xavier). Also thrown into the mix is their disparate temperaments; early issues always have Wolverine and Thunderbird in a contest to see who can blow up first. This first volume in the "Essential X-Men" series (not to be confused with the single volume released of the "Essential Uncanny X-Men") contains "Giant Size X-Men" #1 and issues #94-119 of "X-Men." The new X-Men are put together to rescue the old X-Men, at which point the question becomes: what do you do with thirteen X-Men? The answer is to get down to a half-dozen by having all of the original X-Men leave except for Cyclops, to have one of the new X-Men decide not to play, and then you are down to seven, one of whom is doomed to die (and if you pay attention to the group logo on the cover you can see that they telegraphed their choice from the start). All things considered, the new X-Men are an improvement over the original group, not only in terms of their powers but also in terms of their secret identities. I mean, all things considered all Angel could do was fly and the Beast was a muscular acrobat with lots of brains (the decision to make him blue and furry admits to the character's liabilities). Storm is an exotic elemental queen trying to fit in with regular folk and Colossus remains a man-child at heart, even in this brave new world. Most importantly, Wolverine makes the Thing look like a cuddly teddy bear, giving the group a dangerous edge. Claremont liked to skate as close to that edge as possible, and eventually he would send the series over the edge with his Dark Phoenix plotline.Ultimately the idea of recreating the X-Men is more interesting t

Published by Thriftbooks.com User , 20 years ago
I actually LIKE the fact that this book is in black & white. The art in this book is amazing--very representative of the period in which comic book art reached its zenith. Without the addition of color, one gets a better feel of the craftsmanship involved. As for the stories themselves, the title is correct--this IS essential for any X-Men fan. It tells how the New X-Men get formed. Also, the tone of comics darkened in this period, so we get X-Men fighting demons and the like. We see the New X-Men's first encounter with Magneto. We get to journey to the Savage Land, and we get the Phoenix Saga. Definitely worth the investment for X-Fans.
Trustpilot
Copyright © 2022 Thriftbooks.com Terms of Use | Privacy Policy | Do Not Sell My Personal Information | Accessibility Statement
ThriftBooks® and the ThriftBooks® logo are registered trademarks of Thrift Books Global, LLC