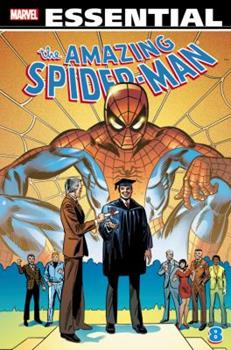 Spider-Man is as amazing as ever against adversarial alumni like the Lizard and the Kingpin, as well as up-and-coming enemies such as Stegron and Jigsaw - with the lesser-known larcenies of the Big Wheel and the Spider-Squad to fill his spare time Featuring the first appearances of Rocket Racer and Will O' the Wisp Forgotten chapters from the Green Goblin legacy and the Clone Saga Spider-Man's origin and Peter Parker's college graduation And J. Jonah...

Published by Thriftbooks.com User , 13 years ago
This eighth "Essential" volume collects black-and-white reprints of "Amazing Spider-Man" issues #161-185 that Marvel Comics originally published between October 1976 and October 1978. It also includes Annual #11 and an issue of Nova. Len Wein wrote issues #161-180, and fellow ex-Marvel editor-in-chief Marv Wolfman started his ASM writing run in #182. Ross Andru provided the penciling for 34 of the 35 regular issues, with the only exception being #181, a "clip show" fill-in from the Spectacular Spider-Man team of Bill Mantlo and Sal Buscema. Mantlo and Don Perlin are the respective writer and penciler for the 1977 Annual. The first half of this book consists of two-part stories including Nightcrawler, The Punisher, Kingpin, Stegron and The Lizard. This run also includes another iteration of the Spider Slayer and the origin of the Will O' Wisp. #171 is a crossover with Wolfman's Nova series, which itself was considered a clone of ASM. After some mediocre issues with forgettable characters like The Rocket Racer and The Hitman, #176-180 is a five-part Green Goblin story, the highlight of Wein's run. Wolfman's run begins with more weak villains like The Rocket Racer (again!) and a man named Jackson Weele who becomes "The Big Wheel", but these issues show more of Peter Parker's interesting personal life, including a Mary Jane marriage proposal and the return of an old girlfriend. A few of these stories appeared in late 1980s Marvel Tales issues, but most are reprinted here for the first time. The stories in this book run parallel with the other Marvel Essential Spider-Man titles Essential Peter Parker: Spectacular Spider-Man Volume 1 and Essential Marvel Team-Up Volume 3. I prefer the Amazing Spider-Man DVD-ROM for its complete collection of the entire ASM run in full color PDFs. However, the Marvel Essentials series offers convenient, inexpensive access to these 30-year old Spider-Man comics without needing a computer.

Published by Thriftbooks.com User , 13 years ago
This was a fairly average entry in the Marvel Essentials series - the return of the Kingpin, Stegron the Dinosaur Man and the Lizard, along with guest appearances by the Punisher, Nightcrawler and Nova. It is a good read for a Marvel fan ... most others probably won't have all that much use for it. As many others have said, this volume DOES NOT contain Giant-Size Spider-Man #6. That issue, like most of the final issues of the Giant-Size books, was all reprinted material (which you can get in Volume 3 or 4, depending on which printing you get). All you get here is the cover, which is nothing out of the ordinary. I would've rather they have spent that money they used to print that page (and the Green Goblin entry from the Marvel Universe Handbook) to have acquired the rights so they could reprint Giant-Size Spider-Man #3 (not to mention Marvel Two-in-One #21) with Doc Savage, so they could've made the series truly complete.

Published by Thriftbooks.com User , 15 years ago
IF you like Spider-Man you'll love this one and don't forget to get the ones before this Volume because then you'll be clueless on whats happenen so great buy now...

Published by Thriftbooks.com User , 15 years ago
The previous reviewer stated that Giant-Sized Spider-Man #6 is not included in this volume. This is not entirely true. The contents of that issue are not re-printed, but the cover is included in this volume. There is also a note on the table of contents stating that Giant-Sized #6 reprints the contents of Annual #4. It doesn't make a huge difference since you still don't get the actual contents of the issue, but I thought it should be made clear what this volume contains.

Published by Thriftbooks.com User , 15 years ago
I love this era of The Amazing Spiderman. Maybe I'm biased because the very first Spidey title I ever bought was ASM #168, but I love Len Wein's writing. Most of his 30-issue arc can be found in this volume (the first section, issues 151-160, are in Essential Spiderman vol 7) and it's a great ride. While some of his plots were a little cheesy (Hammerhead's ghost and the Kingpin's "life-force" machine), his narration and dialogue were first-rate. And his cliffhangers were truly exciting. In addition, he made great use of ASM's supporting cast and gave each of them new dimensions. Furthermore, he and artist Ross Andru really incorporated New York City into their plots which gave the series a real sense of place. BUT --- on both the front and back covers this volume lists Giant-Size Spiderman #6 as being included and it is NOT. I'm not sure what happened. Maybe the editors realized at the last minute that #6 reprints ASM annual #4 (which is already featured in an earlier Essential Spiderman volume) and therefore why reprint a reprint? Maybe they were thinking that people who will purchase this volume already have the earlier volume and wouldn't want to see the story twice. If that's the case - they're in error. This is the first Essential Spiderman I've purchased and I would have appreciated reading GS ASM #6, reprint or no reprint. Why not simply go ahead and include it anyway? They included Amazing Spiderman Annual #11 (not written by Len Wein) and it's pretty bad. In any event, not only is GS ASM #6 advertised on the front cover (as well as in it's press release) but they use the cover image for this volume's back cover as well! It's a small quibble, I know, and there are more important problems in the world, but I figured it's better to speak up than to remain silent. Peace!
Trustpilot
Copyright © 2022 Thriftbooks.com Terms of Use | Privacy Policy | Do Not Sell or Share My Personal Information | Accessibility Statement
ThriftBooks® and the ThriftBooks® logo are registered trademarks of Thrift Books Global, LLC