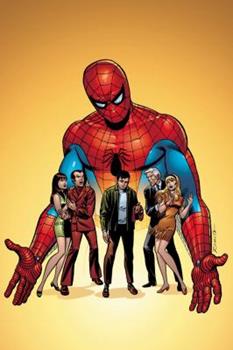 After being bitten by an irradiated spider, young Peter Parker learned he had gained the proportional strength and agility of a spider. Combined with a keen "spider-sense" that warned him of danger, Peter became the hero we all know and love...Spider-Man In this great volume, Peter will face some of his greatest challenges and overcome some of his most harrowing foes. Adventure at its best, true believer

Published by Thriftbooks.com User , 12 years ago
Continuing the Spider-Man comics saga in volume 4, we find Peter Parker up against new foes as well as the classics. In this set, Gwen Stacey's father begins to have his suspicions that Parker and Spider-Man have a deep "connecting" secret. You'll find these titles inside volume 4: "Mission: Crush the Kingpin!" "Spider-Man: Wanted!" "The Speedster And The Spider!" (featuring Quicksilver) "Rocked By.. The Shocker!" "The Web Closes" (part 1 of the secret tablet saga) "If This Be Bedlam!" (part 2 of the secret tablet saga) "Death Without Warning" (part 3 of the secret tablet saga) "Lizard Lives!" (part 1) "In The Blaze Of Battle!" (part 2) "The Night of the Prowler!" "To Prowl No More!" "On The Trail Of... The Chameleon!" "The Coming of the Kangaroo!" "And Then Came Electro!" "The Schemer!" (part 1) "The Kingpin Strikes Back!" (part 2) "And Now... The Secret of the Schemer!" (part 3) "Beware... the Black Widow" "Unmasked at Last!" "The Arms of Dr. Octopus!" "Doc Ock Lives!" (part 1)

Spider-Man begins the Seventies in less than stellar form

Published by Thriftbooks.com User , 20 years ago
"The Essential Spider-Man, Volume 4" presents black & white reprints of "The Amazing Spider-Man" #69-89 and Annuals #4-5, which covers the web-head from 1969-71. I was sort of surprised as I read through these issues again that really nothing significant happens. I mean, we have return visits from the Kingpin, the Lizard, the Chameleon, Mysterio and Doctor Octopus, but the new villains are pretty week: Man-Mountain Marko, the Prowler, the Kangaroo, and the Schemer. Make that incredibly weak villains, except for the Prowler, who is just a kid making stupid mistakes. At this point Stan Lee has his formula for Spider-Man, which is probably encapsulated best by what our hero says at the conclusion of issue #72: "So, I finally nailed the Shocker...Big deal! I'm in the doghouse with Gwen...the tablet is gone again...I just remembered something else...I forgot to take a single picture of the entire battle! So all I get out of it is some skinned knuckles! In other words, the wonderful Parker luck is still running true to form! Nuts!" The best story in this collection is probably "The Parents of Peter Parker!" from Annual #5, although the most memorable moment is when the Black Widow comes up with her sexy new threads of the Seventies. John Buscema takes over the penciling chores from John Romita (Sr.) at one point before Gil Kane makes his first appearance right at the end. Buscema did some nice work on "Conan," but Spider-Man does not play to his strengths; Kane, however, does manage to adapt his distinctive style to the comic. Fortunately, things improve considerably for Spider-Man as Stan Lee gets a feel for the Seventies. So you can just write off this collection as the quiet before the storm of Harry's drug addiction, the deaths of Captain and Gwen Stacy, and Spider-Man really becoming Spider-Man.

Published by Thriftbooks.com User , 20 years ago
The Essential Spider-Man Volume 4 is a very good collection of stories that place our super hero and his alter-ego into situations that, in a day and age over thirty years after their publication, seem so relevant to modern-day Americans.Though Peter Parker was always busy being both an underappreciated crime fighter and a student trying to maintain an active social life, his attempts to keep his super hero identity a secret have taken their toll. Before, Peter's main secret identity challenge was to never let poor Aunt May know that Peter Parker is Spider-Man. In these stories, he is now faced with an added unsurmountable task of keeping this secret away from a much younger, less gullible individual in Harry Osborn, his college roommate.Throughout the stories, Peter, because of trying to pull double duty as a full-time college student with a girlfriend (who constantly questions his motives and who does not and must not know his secret) and as the ever-loving Spider-Man is bombarded by working 'round-the-clock hours and facing lack of time necessary to keep his grades up. In the earlier issues, he could manage to fight crime and still be the top student in his high school classes; however, this time, he is sleeping less, and after he fights up yet another victory, he returns to a home that is a much smaller setting than Aunt May's place at much later hours and cannot change out of his costume until he has climbed in through the apartment window while Harry is either away or asleep. And in some of the episodes, Peter is so tired that he crashes and ends up falling asleep while lying across the bed as opposed to having properly tucked himself in.In a day and age of holding down two or more jobs and multitasking each one, we cannot help but sympathize and empathize with Peter Parker's dilemmas. Not only do we feel Peter's exhaustion, but we, in our own way, are like Peter in the sense that it is sometimes impossible to reveal to others who question or criticize us the challenges we put up with, because our situations are either unique or beyond their comprehension.Pivotal points and issues also make these past stories so relevant. We have the inclusion of minority characters who are trying to improve their living standards through education, and even when they are in college or have just graduated, it seems that opportunities are few, since someone else higher up has already rung up the ladder of success. Attempts to handle these circumstances, through student protests to improve living conditions and educational opportunities at Empire State University and through one's desperate attempt to take on a masked villain alter-ego to create fear, thus respect, from the big wheels of society, seem no less primitive in this day and age. And we still often wonder if there is any way that a pacifist can truly create change in a society where change is truly needed.

Published by Thriftbooks.com User , 21 years ago
I bought this book along with the previous volumes. In the wondrous Marvel Age of the sixties, there were two true stand-outs. The first was the Fantastic Four (Kirby's best 'nuff said), and the other Spider-man. I would argue that Peter Parker is the greatest of the classic Siver Age Super-Heroes. He was no Jet Pilot, Doctor, or Captain of Industry, just a pretty average kid who, after one tragic mistake, always tried to do the right thing. This volume I would not rate as highly as the others, simply because it does not feature Ditko or Romita Sr. That does not mean that it is not great in its own merit. The tales scripted by Spider-man co-creator Stan Lee were more complex and inter-woven than previous stories. It is a great sampling of Spider-man in his rightful era, and while there is no Steve Ditko or John Romita Sr, the art chores are handled by industry legends such as Jim Mooney, John Buscema, and Gil Kane. This is another excellent addition to the "Essential" format. Once I got past the black and white I settled down for some classic adventures at a bargain basement price. If you've never purchased any of this line of reprints, give it a shot. They're the size of phone books and are jam-packed with some of the best comics Marvel has ever produced.

Published by Thriftbooks.com User , 21 years ago
this volume of essential presents spiderman tales not previously reprinted (except for in the masterworks series which goes for hundreds of dollars now) in the past two decades....these are tales unpolluted by the past 40 years of continuity...stan lee had a plan and stuck to it...peter parker shines as a down on his luck student trying to keep his studies , lovelife, hero life, and his doting ol' aunt may...together...as he faces, for the first time, some of his greatest challenges...a must read for those who have not seen these tales before.... ...a must have for those who have been reading spidey for the last few decades and want a break from all of the garbage spideys been handed (epsecially in the past 8 years)....
Trustpilot
Copyright © 2022 Thriftbooks.com Terms of Use | Privacy Policy | Do Not Sell or Share My Personal Information | Accessibility Statement
ThriftBooks® and the ThriftBooks® logo are registered trademarks of Thrift Books Global, LLC