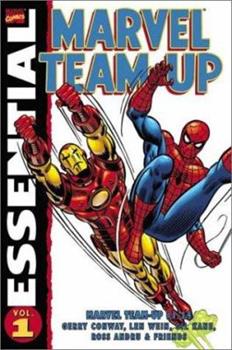 The wisecracking web-slinger Spider-Man teams up with the biggest stars of the Marvel Universe in these classic adventures, including the Incredible Hulk, the Uncanny X-Men, Ghost Rider, the Fantastic Four, and the Avengers!

Published by Thriftbooks.com User , 15 years ago
This is a great comic. It is a good collectible item, but for some people it may not be the best because it does not contain Bullseye or the Kingpin.

Published by Thriftbooks.com User , 17 years ago
It's too bad the people at Marvel don't put these wonderful volumes in color on CD. The black and white don't do these stories justice; although they are still enjoyable. If you like the seventies greats as far as writers are concerned...ones like Roy Thomas, Gerry Conway, Wolverine creator Len Wein..then this is the book for you. It has the first twenty five titantic issues all in one volume. Growing up in the seventies I do remember getting that first issue in a coffee shop/newsstand way back in 1972. This is when comics were 20 cents each! Artists like Gil Kane, Ross Andru (who drew the Spider-Man/Superman team up), Ghost Rider's Don Perlin,Sal Buscema, Mike Esposito all took part in this great comic all those years ago. I will never forget those Gil Kane covers. This volume also has the first Spidey team up with Brother Vodoo! For those of you who love seventies Marvel, don't let this one pass you by!

Published by Thriftbooks.com User , 19 years ago
This volume (Volume 1 of Essential Marvel Team-up) holds special meaning for me as issue 14, with the savage Sub-Mariner was the first (and last) comic book I stole from a corner store. I had to have this issue with these two stars. That was the true appeal of the first couple of years of this series, anticipating the wonderful match-ups and catching a first glimpse of those wonderful covers with two heroes in full-throated action, such as the wonderful sight of Spider-Man battling the Werewolf (by night) on a bridge in San Fransicso. Many of the stories do not live up to the promise and it was hard to develop more complicated stories in this format. In fact, the most developed storyline (extending over three issues and involving Spider-Man, the Human Torch, the Avengers, and the Inhumans) was the weakest. The writing improved with the addition of Len Wein and the art was generally quite good, particularly as done by Gil Kane (see his wonderful work with Captain America, Spider-Man and the Gray Gargoyle, one of the best stories in the series). The stars tend to be the more famous characters of the Marvel universe, with Human Torch hogging too much of the spotlight (thankfully in the case of the classic Human Torch/Iceman dust-up) but there are occasional appearance by such rarely seen characters as Brother Voodoo. All in all, this is a wonderful volume and a delightful trip down memory lane. Where else could one see Spider-Man and the Ghost Rider (he of the flaming head) battle a villian whose head is one giant eye, the Orb.

Published by Thriftbooks.com User , 19 years ago
On the face of it, Marvel Team-Up hardly seems worthy of an Essential collection when a number of other Marvel titles -- Daredevil comes immediately to mind -- have not yet garnered such attention.But I bought Essential Team-Up the first time I laid eyes on it and found it to be worth ever penny. I'm a big fan of non-hero titles -- Love and Rockets, Eightball, just about anything from Drawn & Quarterly -- but there is an undeniable charm to these stories, especially coming to them post-"Watchmen," "The Dark Knight Returns," and every other attempt to modernize or legitimize men running around in tights.One gripe: the Human Torch appears in far too much of it -- I'm assuming the writers (Roy Thomas and Gerry Conway among them) enjoyed the bickering he and Spider-Man participated in. More variety in guest-stars would probably up the fun quotient for me. As is, how can you go wrong with something like Spider-Man and Brother Voodoo in "Moondog is Another Name for Murder!"?I'm hoping for a Volume 2 in this series. Hopefully, we'll see it in a reasonable period of time. (For obvious reasons, it seems only "Spider-Man," "The Fantastic Four," and "The Avengers" Essential series warrant any timely release cycles.)And since Marvel is already producing other off-the-beaten-path Essentials ("Ant Man" and "Howard the Duck"), how about "Master of Kung Fu," "Iron Fist" (for the early John Byrne) and "Marvel Premiere?"Essential Marvel Team-Up is a blast. Enjoy.

Great example of Marvel fun in the 70s!

Published by Thriftbooks.com User , 19 years ago
If you were a kid growing up in the early 70s, Marvel Comics were possibly an integral part of your life. And in the 70s, "team-up" books were what it was all about. I'll never forget my Dad buying me Marvel Team-Up No. 1 in 1972........and the idea of my favorite characters "teaming up" was instantly appealing!No, these weren't masterpieces.......but "Marvel Team-Up" was a fun book, originated at a time when Marvel was at a transition period.......a creative period which resulted in mega-fun for the readers. Yes, there are members of the Avengers and FF here......but Spidey also teamed up with such unusual characters as Werewolf by Night, Ghost Rider, Brother Voodoo, The Black Panther and even (later) the Frankenstein Monster!! The idea was to give the spotlight to secondary characters through Spider-Man, and for awhile (at least until Jim Shooter came along as editor in 1978) it worked.If you're not familiar with Marvel beyond the obvious characters (Hulk, Spidey, Fantastic Four, etc.) this is a great way to introduce yourself to Marvel's second bananas. It's also a great way to find out what comics were like in the early 70s.I mean, as long as you're not looking for comicdom's answer to Shakespeare or Dante', and approach it with a fun frame of mind, you should enjoy "Marvel Team-Up" immensely. Hey....let's have more 70s titles like "Marvel Two-in-One," "Tomb of Dracula," "Ghost Rider" and others......The only reason I don't give this 5 stars is because of the cheap black and white, flimsy format. I really wish Marvel would take DC's lead and just go to their "Masterworks" approach for everything. Still, if you want to forego purchasing the originals, this is a nice alternative.
Copyright © 2020 Thriftbooks.com Terms of Use | Privacy Policy | Do Not Sell My Personal Information | Accessibility Statement
ThriftBooks® and the ThriftBooks® logo are registered trademarks of Thrift Books Global, LLC