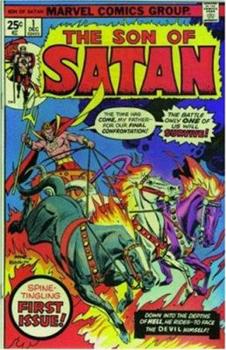 What's it like to be the son and the daughter of the Father of Lies? Find out as Daimon Hellstrom and his, Satana, face the worst of two worlds Can they save their souls along with teh world?

Son of Satan/Son of Adam

Published by Thriftbooks.com User , 13 years ago
Yes, it was common for DC, Marvel, and some of the smaller houses to not do their best work on their "horror" titles. There was often a revolving door of second-rate hack writers and artists working on them. Well, this was definately not the case with these stories. Every story here is well drawn and well plotted. There is a remarkable consistency considering how many people worked on all these issues at Marvel. I am not exagerating when I say that this volume was (surprisingly) the best Essentials collection that I have yet read. It was a rare treat that I stretched out reading for a week- right before sleep. As for these stories not being truly Essential, well, they are essential to understanding the 70's. Before the Comics Code Authority began to relax its restrictions in the 70's characters like Daimon Hellstrom, Satana, Ghost Rider, Morbius and Dracula never would have appeared in comics. That is because the code was written specifically to ban horror and the occult- in response to the old EC titles. These stories demonstrate a historical change in direction for American comics- without them there would have been no Midnight Sons and certainly none of the many Vertigo titles. Many groups attacked Marvel for making the son of S*t*n a hero with his own title. I remember avoiding the title myself. But then this shows a total ignorance of the character. Daimon Hellstrom was raised by Jesuits to be a priest. Every story is a morality play with Hellstrom on the side of the angels. Yes, he is the son of the Adversary but he has given himself over to heaven. He constantly struggles with his darksoul, his shadow, but in the end he realises that he can never totally exorcise his inner darkness- only manage it in self-acceptance and use its power to energize the creative instead of the destructive. Owning your shadow is pretty deep for a comic book- especially one of this period, but then the entire collection shows an above average grasp of the psychological and metaphysical. Daimon represents yang (light with a seed of darkness within) while his sister Satana represents Ying (darkness containing a seed of light.) They interact in a high opera of dynamic equilibrium... One other thing- I usually find these black and white reprints to be distracting. This wasn't the case with these stories. The black and white with plenty of dark noir shading and shadows worked better for me. Bright colors would have been distracting, but maybe that is because I was raised on the old EC and Warren black and white horror titles. My only criticism is the total lack of page numbering- it is impossible to refer back to anything without flipping through hundreds of pages...

Published by Thriftbooks.com User , 14 years ago
Sooooo much fun this collection! Quality 70's drawing and story development throughout, increasingly cool and thoughtful as it moves along through the issues ... Daimon Hellstrom becomes quite a character ... a thoroughly enjoyable WILD read. I had been looking forward to its release since the Ghost Rider collection last year and I was NOT disappointed. It gets far out and sinister, just like you'd want it to.
Copyright © 2020 Thriftbooks.com Terms of Use | Privacy Policy | Do Not Sell My Personal Information | Accessibility Statement
ThriftBooks® and the ThriftBooks® logo are registered trademarks of Thrift Books Global, LLC