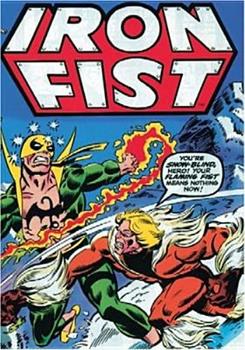 Published by Thriftbooks.com User , 13 years ago
...of course it helps that by the time Iron Fist finally got his own series, it only lasted 15 issues. But those 15 issues are great. Once Chris Claremont and John Byrne got a hold of this character, the book soared. Great art, great stories, great characters -- and the first interracial love story in comics history! While many of the Marvel Essential series are culled from second-rate 70's books, this one is a classic. It's not about Kung Fu or the martial arts -- it's about great adventures and characters. A superior series finally immortalized in book form (albeit in black and white).

Published by Thriftbooks.com User , 14 years ago
This is why the Essentials series is handy-- it takes someone with a excellent comics collection and a good cross-referencing system to put all these books together in one place. Iron Fist was part of the Marvel 70's move to try anything non-superheroic. A bit more super-heroish than Shang-Chi, Iron Fits had trouble finding its feet as a feature. Sometimes a bit derivative (with an origin tale that echoed both Ka-Zar and Scott Summers) and sometimes bizarre (okay, so the magic city is guarded by...um...homicidal plants), the feature was bounced between a few different teams until it was handed over to Chris Claremont and John Byrne, who were just about to team up on the fabulously successful X-Men revival. With their teamwork, the book acquired the touches for which they would both be famous. Strong women characters using brains instead of boobs. Strong supporting casts. Ties to other characters in their stable (a lead in thsi feature became Jean Grey's room-mate). Byrne's fluid line and Claremont's long-range story arcs. Unfortunately, the book was bi-monthly, making the long story arcs tough to follow, and after moving from Marvel Premiere to his own book, Iron First was canceled, with several plot threads hanging. However, Claremont was at that time also writing the Spidey team-up book, which in his tenure became the Marvel Loose Ends Clearing House-- so Fist made a two-part appearance there to pick up most of the loose ends. Then someone in the House of Ideas decided to prop up the sagging Luke Cage, Power Man book by teaming him up with Fist-- a rather inspired choice to team up Marvel's street-smart black character and a guy from a mystical somewhat asianish city (like the Rush Hour movies...? nah--). Byrne and Claremont were brought in to oversee the "wedding" of the two features, and it's there that there run on Fist ends, and that's where this collection takes you So here you get one of the better Marvel B-listers, many good cameos, and the early teaming of two comic industry giants. Well worth your time and money!

Published by Thriftbooks.com User , 15 years ago
The 1960s and `70s were a simpler time in comic book writing and art, but simpler but does not mean dumber, merely less complicated (the comics of today tend to be more complex which has its own pluses and minuses). Marvel has been reprinting many of the comics from this period in their "Essentials" series. Having read quite a few of these Essentials volumes over the past couple of years, I can confidently say that not all are equally good; some, in fact, are pretty poor. Happily, the Essential Iron Fist is one of the best in the bunch. Iron Fist is the superhero name for Daniel Rand. As a young boy, Rand was hiking in the Himalayas with his parents and a family friend in search of the mythical kingdom of K'un-Lun. The friend turned out to actually be an enemy, and his betrayal would cost Rand's parents their lives. Danny, however, survived and made it to K'un-Lun where he was trained in the martial arts. A special quest would result in his obtaining the power of the Iron Fist, which allowed him to focus energy into his fist and make it super-strong. There were other benefits to this power (including self-healing), but he could only use this energy sporadically. Rand returns to New York City seeking revenge against the family "friend" but finds that it is not easy to achieve. Even as that plot line is resolved, he finds new adversaries, probably none as formidable as Khan. Along the way, he gets allies and friends, notably Colleen Wing and Misty Knight who together form a security company; Misty and Danny also have an evolving romantic interest. Of course, the most notable friend would be Luke Cage, who is only introduced at the end of this volume. Together, the two will become Power Man and Iron Fist, Heroes for Hire. The strength of this Essentials edition is clearly due to the writer and artist who were responsible for most of the issues within: respectively Chris Claremont and John Byrne. Shortly after their Iron Fist run, they would take over X-Men and transform that comic from a second-string book to the biggest in the Marvel Universe. I've always had a mixed view on Claremont - he's a good writer, but his storylines sometimes get so intricate they seem to go on forever without any real resolutions. This would be a bigger issue with his X-Men comics, but there are shades of it even in Iron Fist. Claremont could pull it off, but I think his prominence in the industry helped make this sort of convoluted plotting the norm rather than the exception; as a result, there seemed to be less one-issue stories and more that took years to finish. I'm not sure that this was a good trend. Byrne, on the other hand, I have a more positive view of, and this book reaffirms why: his art is top-notch, and is evidence as to why he has been one of the top artists in his field for decades (he's also a decent writer himself). It is not merely the way he illustrates people but his wonderful depiction of action that makes Byrne great. Ther

Artist John Byrne was on this title before X-Men

Published by Thriftbooks.com User , 16 years ago
If you want to see John Byrne's art before his run on X-Men; this is the book to see. You get to see a lot of Kung Fu moves and poses that show Byrne's versatility with the genre. I wonder if he studied the moves in any Bruce Lee movies? You don't even have to like Kung Fu to appreciate the book. It's super hero action with all the stars from the 70's. If you like seventies Marvel comics, this is the collection to purchase!

Add this to your collection NOW!

Published by Thriftbooks.com User , 17 years ago
While the Marvel Essentials have been moving into the `70s for some time now, the choices have been somewhat questionable. Aside from Essential Howard the Duck, the storylines have been either too sporadic (the Punisher), or horribly repetitive (Tomb of Dracula). Not so with ESSENTIAL IRON FIST. This book is a winner - a prime example of what made Marvel THE comic company of the 1970s. At that time, Marvel was embracing any fad that came along. Monsters, Sword and Sorcery, Toys... nothing was safe, including Martial Arts. Shang-Chi, Master of Kung-Fu, was their first contribution, followed by the debut of Iron Fist in Marvel Premiere #15 (1974). Produced by Roy Thomas and Gil Kane, Iron Fist incorporated elements of the TV series "Kung Fu", plus a bit of James Hilton's "Lost Horizon", plus a cool superhero outfit and excellent supporting characters. The result was a story that took a couple of issues to get its feet on the ground, but soon made headway. With the addition of writer Chris Claremont and artist John Byrne several months later (before they were the X-Men "dream team"), Iron Fist really took off and moved into his own series: 15 issues of spectacular work, featuring the return of Boomerang, the debut of Sabretooth, and appearances by Iron Man and the X-Men. Claremont and Byrne stick with him as he joins Spider-Man in a few issues of Marvel Team-Up, then some guest appearances in Power Man, before finally finding a home in the newly-christened Power Man/Iron Fist. Amazingly, through all of these different titles, the main story is continuous. Furthermore, every issue is a fresh addition to the storyline. The bulk of this volume is by Claremont and Byrne, and their work is spectacular. The reproduction gets a bit fuzzy in the later Power Man issues, as it appears to have been scanned from colored pages instead of line art. But that's a minor problem. For a so-called "second stringer" in the Marvel Universe, Iron Fist proves to be a fascinating character and a worthwhile read.
Copyright © 2020 Thriftbooks.com Terms of Use | Privacy Policy | Do Not Sell My Personal Information | Accessibility Statement
ThriftBooks® and the ThriftBooks® logo are registered trademarks of Thrift Books Global, LLC