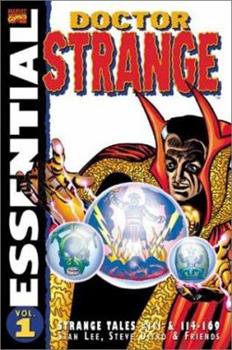 This description may be from another edition of this product. Stephen Strange is Doctor Strange. But he is no doctor, and least not the kind that would initially come to mind. He is the Master of the Mystic Arts, a sorcerer supreme, a white knight who wields...

Something you have to have Lived through to understand!

Published by Thriftbooks.com User , 13 years ago
a different tack on an excellent TPB like this volume: those of us back in the late 60s who actually read these stories when they originally came out, those of us, who had to actually wait an entire month to read the next installment, can attest to just how exciting the enormously long continuous story plot was, where Dormammu was using Mordo as a tool to hunt down Dr. Strange. With everything stacked against him, Strange somehow managed to elude these forces again and again, and barely, until finally, he has a face to face showdown and throwdown with Dormammu himself. For the people reading these now, where you can just go from one story to the next without the interminable wait, it is still great to read, but again, when we had to count down the days for not only this series but all of the many wonderful silver age Marvel series each month, it was downright torture! So these TPBs are something to really be appreciated..

Published by Thriftbooks.com User , 14 years ago
this was a blind buy for me on a rainy day when i went to the comic store to buy essential spider man, which was sold out. I was not dissapointed, as a matter of fact this is one of marvels silver age treasures. it was winter when i started reading, and i couldnt stop. what better way to spend a grey, dull afternoon than with a good comic? i highly suggest this volume, and also volume 2. volume 3 coming this winter, so thats what i will be reading. quiet simply, these books made dr. strange one of my very favorite comic book characters.

Published by Thriftbooks.com User , 18 years ago
Inside these covers includes all the Dr. Strange material before it became its own magazine. Stan Lee is at his best defining the bravery and stamina of Steven Strange as one with absolute moral conviction and bravery. Strange is often outmatched and outwitted but always comes through at the end using smarts rather than muscle power. Since he explores magic and wizardry you see spells instead of endless fistfights. That makes this unique material indeed. Steve Ditko is amazing as both penciller and inker casting the mood of the series as dark and imaginative. This is indeed Steve's masterpiece. It is unfortunate that Steve left Marvel so early in his career. Sadly comic artists even today to not get the recognition they deserve. No comic works without the artists. This book is not only about Dr. Strange it is also the preserved works of one of the most unusual and amazing artists of the 1960's. If you like Steve Ditko's work, Essential Spiderman 1 & 2 capture the 38 issues that Steve Ditko drew the Amazing Spiderman. Check them out!

Forget Spider-Man. It Doesn't Get Better Than These Comics!

Published by Thriftbooks.com User , 18 years ago
I have been a big fan of the Fantastic Four for many, many years. I found some of the early stories really enjoyable, with Dr Doom being of course being my favorite evil character. Spider-man, The X-Men, The Incredible Hulk, Thor, Ironman and others were interesting, with Spider-Man probably being my second favorite comic series next to The Fantastic Four. I thought nothing could compare to the surreal storylines involving Reed Richards and his family, with adventures in outer space or trips into the past, etc. UNTIL I READ THESE STORIES. I had always avoided reading Dr. Strange in the past for some reason. I remember enjoying the early Defenders series but that was just because I was really into The Hulk and Submariner at the time. Anyway, this has been a real treat! I find the stories highly imaginative and although brief, very compelling. Dr. Strange is the most overlooked Superhero in my opinion, although I've noticed there are some websites devoted to the "Master of Sorcery and Black Magic." Now I know why there are some devoted fans. Stephen Strange has good intentions that rival Super-man and the villains are as exciting as anything I've ever encountered in fiction, all written in a wonderfully spooky manner. I recommend this book to any fan of early Marvel comics. If you've enjoyed The Fantastic Four, Spider-Man, The X-Men, etc. then this is too good for you to miss!

By the Hoary Hosts of Hoggoth, this is great stuff!

Published by Thriftbooks.com User , 19 years ago
Cultists who oppose Harry Potter books and Dungeons and Dragons games claim that those books somehow contain instruction in real occult magic. 'Fraid not. If you want to learn real black magic spells that actually work, you should start here.The high Marvel Silver Age prose style, rich in polysyllabic adjective and epithet, seems odd and dated anymore in the mouths of mere superheroes. But it still seems natural coming from the likes of Dr. Strange, the Ancient One, and Dormammu. In fact, you can't imagine mystic, hyperintelligent characters speaking any other way. The perennial problem with occult themes in comic books is that they seem to be full of arbitrary, drop-in plot devices that lack the campy, contrafactual charm of "scientific" explanations. But Dr. Strange does it right. The repeated use of murky characters and symbols like the Crimson Bands of Cyttorak, the Omnipotent Oshtur, the eternal Vishanti and the all-seeing Eye of Agamotto gives the magic presented here internal consistency and the appearance of a system. Steve Ditko's art, of course, defined the look of Dr. Strange; it is vaguely psychedelic, much more impressionistic than the art of Jack Kirby, and well suited to drawing the weird dimensional landscapes seen here. This material is presented as just the inked line art, without colour. The art itself is strong enough to stand up to the loss of the original colours, which were made by primitive printing processes in the original books in any case. Other classic artists who contribute here include the much cleaner and more conventionally Marvellish Bill Everett, and the dark stylings of Marie Severin. Most of the important characters from the Dr. Strange mythos, including the Ancient One, Baron Mordo, the dread Dormammu, Umar the Unspeakable, and Clea are included here. This book covers the entire run of Dr. Strange in -Strange Tales-, which he shared with Nick Fury, Agent of Shield. Many of the covers that are printed here refer to the other stories, but you also get some fine Steranko cover art as a lagniappe here. True believers, assemble. This is great stuff.
Copyright © 2020 Thriftbooks.com Terms of Use | Privacy Policy | Do Not Sell My Personal Information | Accessibility Statement
ThriftBooks® and the ThriftBooks® logo are registered trademarks of Thrift Books Global, LLC