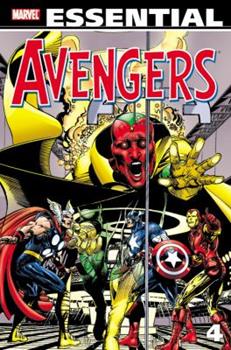 Witness the triumphant travels of Earth's Mightiest Heroes through time, space and other dimensions - fighting the armies of two galaxies, and the heroes of other worlds and yesteryear, with stopovers in criminal territory from New York to the Southwest! Villains from street-level to cosmic! Kang and the Grandmaster! The Zodiac and the Sons of the Serpent! Arkon! The Grim Reaper and his Lethal Legion! The origin of the Black Panther! The Hulk shrunk...

Published by Thriftbooks.com User , 13 years ago
This volume collects issues #69-97 of Marvel Comics' Avengers series that were originally published between October 1969 and March 1972. This also includes Incredible Hulk #140 which pairs with Avengers #88. Most issues feature the team of artist John Buscema and writer Roy Thomas. Sal Buscema pencils a few issues during his brother's tenure and takes over by #87. Neal Adams starts his run in #93. The first three issues feature the team of Captain America, Iron Man, Thor, Goliath, Yellowjacket, Wasp, Black Panther and Vision in an unlikely alliance with Kang the Conqueror. The Avengers roster condenses to the latter five by #73. Hank and Janet depart for Alaska while Quicksilver and Scarlet Witch return in #75. The series dips into mediocrity before rebounding with the acclaimed Kree-Skrull war that closes this volume (Marvel has printed a separate full-color trade paperback of these nine issues). I enjoyed some of the fictionalized US politicians and media personalities that Thomas included in this run, especially two characters that echo today's Bill O' Reilly and Al Sharpton. I prefer the Avengers DVD-ROM for its complete collection of the entire Avengers run in full color PDFs. However, the Marvel Essentials series offers convenient, inexpensive access to these 40-year old Avengers comics without needing a computer. At over 600 pages, this is a tremendous value and offers hours of reading.

Published by Thriftbooks.com User , 16 years ago
I have to disagree with all of the previous reviewers - I find Roy Thomas' Avengers work to be consistently half-baked and trite; if you're looking for a good READ, go somewhere else, preferably the new stuff being put out today - Wanted, Ultimates, Promethea, or what have you. But if you love classic Marvel Super-Heroes, and love to see them exceptionally well drawn, then this book is a MUST-HAVE. Sal Buscema is competent, but the stars here are Squeal Adams and, my fave and TOTALLY underrated, the one-and-only John "tha Don" Buscema. Although inker Tom "the embalmer" Palmer is not my favorite choice over Adams, his work here with Big John is some of the best around. Everyone talks about the Kree-Skrull War saga, which is contained in this volume - by modern day standards, its "ok." Most of these tales are throw away. I cannot emphasize enough that the attraction of this tome is the AMAZING ARTISTRY contained therein. Nobody does the Panther like Buscema, and Adams' Ant-Man is the best that character has ever looked - EVER, I say. No fooling, if you love comic book art and Marvel characters in particular, or know of a child or nephew, etc. that does, GET THIS BOOK - Highest Possible Reccomendation. Note: Essential Avengers vol. 3 is outstanding as well - get both if you don't have them.

The Earth-Skrull War in this one makes it worth reading

Published by Thriftbooks.com User , 16 years ago
When the Avengers started off they were not just Marvel's answer to the Justice League of America, they were a place to toss half of the characters that were sharing space in some of the company's titles. So you had Captain America and Iron Man from "Tales of Suspense," Giant Man & the Wasp along with the Hulk from "Tales to Astonish," and you might as well toss Thor from "Journey Into Mystery" into the mix as well. Of course, the Hulk was gone by the time Captain America showed up, and those began the revolving door that was the Avengers decades before the current dissembling and what not. Consequently, what you consider the glory days of the comic book has to begin with what lineup you like as well as who was writing and drawing the group at any given time. That being said, I think the best days of the Avengers are represented in the comics collected in "Essential Avengers, Volume 4." This trade paperback has issues #69-97 and as a special bonus "Incredible Hulk" #140, which is the celebrated Harlan Ellison story "The Beast That Shouted Love at the Heart of the Atom" (the favor is returned in "Essential Hulk, Volume 3" which also has that story and "Avengers" #88, which sets it up). For me the Avengers have to be led by Captain America and have to have the Vision, who is the quintessential Avengers character, in the line-up. I also prefer to have Iron Man around but not Thor and never Giant-Man (to put a limit on the muscle). I can only stand so much of Hawkeye (and making him Goliath was just the worst of two worlds), and I would be a lot happier if the Scarlet Witch would stick around while Quicksilver was off pouting somewhere. So, I never really get to the idea Avengers lineup, but when we get to the end of this collection and we have Cap, the Vision, Iron Man, and Thor, and that makes me pretty happy.By that point we also have Neal Adams showing up to do the artwork, which means the Avengers have never looked better. I can remember being excited that Adams was breathing some new life into the book, although I think his work on "X-Men" was even better in terms of drawing a superhero group. More importantly, Tom Palmer does most of the inking here, not only of Adams's work but of John Buscema's as well. Along with the work he did with Gene Colan on "Tomb of Dracula," Palmer is clearly my all-time favorite inker and he always makes the artwork look better.Adams shows up for issue #93 in the middle of a solid story arc that has the Avengers stopping a Skrull invasion. Making things even more interesting is the appointment of H. Warren Craddock as the newly appointed head of the Alien Activities Commission who is out to get Captain Marvel and whipping up the common folk so that they attack the Avenger's mansion. At that point the group is made up of the Vision, Goliath, the Scarlet Witch and Quicksilver, which is why the original members of the Avengers show up to disband the group and then save the world. This one ends up in o

PERHAPS THE BEST RUN OF AVENGERS!!!

Published by Thriftbooks.com User , 17 years ago
This period of the late 1960;s through early 1970's was I think the finest in Avengers history. Vol. 4 of the Essential Avengers is a 640 page trade that collects Avengers issues 69 - 97. This was a time of Great Roy Thomas Stories and fantatic artwork by John Buscema and Neal Adams. Without a doubt the highlight of this book is the legendary Kree-Skrull war storyline featuring art by Neal Adams. It is one of the most complex storylines EVER in Comics and has some classic Neal Adams covers, particularly #96 with the Vision just pummeling a Skrull. Other issues of note is #83 with the Lady Liberators...perhaps the first story ever tackling the womens lib movement of the 1970's. #87 features the Origin of the Black Panther. #80 features the first appearance of the American Indian hero Red Wolf. Damn good stuff!

Published by Thriftbooks.com User , 17 years ago
This one has some of the best classic Avengers tales available to date. It has the Captain Marvel Saga with Neal Adams on the art chores. If you are a fan of Roy Thomas's writing, John and Sal Buscema art, then this is the book for you. Marvels finest talents are seen throughout this one. Why can't there be more artists and writers like this in todays versions of the characters?
Copyright © 2020 Thriftbooks.com Terms of Use | Privacy Policy | Do Not Sell My Personal Information | Accessibility Statement
ThriftBooks® and the ThriftBooks® logo are registered trademarks of Thrift Books Global, LLC