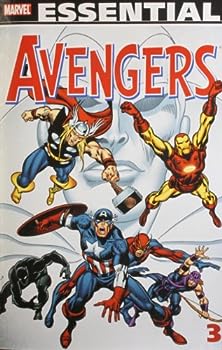 This description may be from another edition of this product. The Avengers have always represented strength through diversity. Among the ranks of Earth's Mightiest Heroes are Captain America, a hero out of time, t hawed from an icy sleep since the end of World...

The Artistic Peak of the Avengers

Published by Thriftbooks.com User , 13 years ago
This is the stuff that Marvel legends are made of. This Avengers collection (covering issues # 47 to # 68 and Annual # 2 from 1967) is authored by Roy Thomas, John Buscema, Gene Colan (both at their peak) and Barry Windsor Smith (somewhat of a cross between Kirby; Trimpe and Steranko in style). Buscema's art is incredibly well suited for the super-team - creating more sophistication and drama out of a group that was somewhat middling before he came along. What makes this special? The introduction of the Vision; Yellowjacket; Ultron; Goliath, and stories like Hawkeye's secret past; Captain America's travel back in time...the authors literally elevated the group into a different stratosphere. The only caveat is that the reprint quality within here is inconsistent and dodgy (I own most of the issues in colour reprints). If you can afford it - wait for a more expensive colour reprint edition to really appreciate the Avengers in their true glory.

The best of the Essential Avengers

Published by Thriftbooks.com User , 14 years ago
Volume 3 is probably the best one to get. I was buying the original comics when they were coming out in the early 70's (and still have them) and the stories covered by this book are amongst the best ever. Favourite of the stories within is the one involving the Vision. Perhaps my favourite moment of all the Avengers stories is in 'Even An Android Can Cry' when Captain America provokes the Avengers into fighting the Vision (as a test) "I'm going to find out if the Vision has what it takes!". First Captain America, then Iron Man and finally Thor put the Vision to the test, to see if he is worthy of joining their ranks. The artwork by John Buscema in this story is the best I've ever seen. So whether you are a youngster who is new to these older comics, or an older person 40cough like myself, these Marvel books are brilliant buys. Theres no risk of missing one part of the story, unlike when you buy a comic once a week. Whole heartedly recommended.

The Avengers become interesting once the Vision joins them

Published by Thriftbooks.com User , 17 years ago
Volume 3 of "The Essential Avengers" is where the Marvel superhero group finally starts to grow up. Part of the reason is because John Buscema became the resident artist (through issue #62), marking the first time that the artwork was a strong selling point, but the more important reason was that the group finally came up with an original group member with the Vision. At that point the group really crystalized for me, so scripter Roy Thomas gets a big part of the credit.This trade paperback collects issues #47-68 of "The Avengers," along with Annual #2. I first seriously started reading "The Avengers" with issue #53, which is where the Avengers battled the X-Men, who were my favorite Marvel group in the Sixties. At that point the lineup for the Avengers had, once again, changed. At that point it was Golaith, the Wasp, Hawkeye, and the Black Panther. Getting rid of Hercules and the mutant tag team of Quicksilver and the Scarlet Witch was a good move, although I can never really think of it as the Avengers unless Captain America is in charge (he bolts in the first issue here). But I never liked Hawkeye and thought making him the new Giant-Man and making Goliath into Yellowjacket, was ill-advised. The only reason I kept reading the book was because of the Vision, so that even when other Marvel superheroes who were incapable of sustaining their own books (e.g., the Black Knight) joined up it was the android that held my attention. .The Vision first popped up in issue #57, created by Ultron-5 to defeat the Avengers. Instead, he became their most interesting member, although it would be a while before the whole backstory on his creation came to be. At this point the idea that he was "an android...with the amnesiac brain patterns of a murdered man," Simon Williams a.k.a. Wonder Man, was enough. On top of that I liked the way Buscema drew the Vision with his eyes always completely shadowed. Buscema leaves the book during these issues, but he was replaced by Gene Colan, always a favorite, and then Barry Smith came in for a couple of issues drawn in the distinctive style that was still evolving and about to explode when he and Thomas started "Conan the Barbarian."

The best one so far

Published by Thriftbooks.com User , 19 years ago
Easily the best volume of the three Avengers Essentials to date, we now see Rascally Roy Thomas at the scripting helm, along with Awesome John Buscema doing most of the art chores. Say no more! This duo is one of the greatest in comics lore... and even demi-gods Barry [Windsor] Smith and Gene Colan show up to help out on art. This collection contains the spectacular introduction of the Vision, the Avengers vs. the (old) X-Men, several battles with arch-foe Ultron, and the classic Avengers vs. Avengers thanks to the machinations of the time-spanning Scarlet Centurion. I'd give this compilation five stars, but the several issues featuring Hercules and the battles in god-ville are just plain dull. (Avengers #50 featured this crap? YEESH.) But don't let these few pages spoil the rest of the great fun.

Published by Thriftbooks.com User , 20 years ago
This is an amazing collection of late 60s comics adventures. Here we have the cream of the Marvel heroes gathered together to fight some awesome menaces. Several heroes are added to the group and it is arguably one of it's most diverse incarnations. Black Panther, the greatest of the black superheroes, joins early on in this collection. The Vison, the lonely android, is given an original and membership. hawkeye becomes Goliath replacing Giant Man/Ant Man who becomes Yellow Jacket. Henry Pym's problems are the cause of several plot twists in these stories, from his multiple identities to his creation the Ultron line of robotic menaces. besides the evil robot, we're given excellent villains to battle the Avengers-Magneto, Grim Reaper (1st appearance), The Scarlet Centurion (another persona for the time traveling Kang/Rama Tut/Dr. Doom) and Zemo. Time travel figures in the Zemo story and the Scarlet Centurion epic (a 44 page slug fest beteween different versions of the Avengers). All in all an excellent collection. Roy Thomas is always at his best with superhero groups and this is where he honed his craft. John Buscema's art is excellent making group battle scenes flow without seeming overcrowded. The reproduction varies from stark black and white reprints to what appears to be muddy xeroxes of the stories, sometimes within the same story. Except for those few bits of murky copies, Marvel again shows why it dominated the field in the 60s. Listen up, true believers, Make Mine Marvel Essentials!
Copyright © 2020 Thriftbooks.com Terms of Use | Privacy Policy | Do Not Sell My Personal Information | Accessibility Statement
ThriftBooks® and the ThriftBooks® logo are registered trademarks of Thrift Books Global, LLC