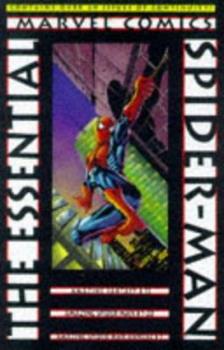 While attending a demonstration in radiology, high school student Peter Parker was bitten by a radioacti ve spider. Learning he had gained spider-like powers, Parker donned a costume and became the amazing Spiderman. '

Once upon a time a radioactive spider bit Peter Parker...

Published by Thriftbooks.com User , 20 years ago
I am sure I am not alone in going back and re-reading "The Amazing Spider-Man" from the beginning as a way of both preparing for the blockbuster movie version and critiquing its fidelity to the original comic books. When he first appeared in "Amazing Fantasy" #15 the promise was that we would find the character to be "just a bit...different." Although there were similarities to those who had come before (e.g., the motivation of a loved one's death just like Batman, the use of radioactivity to provide superpowers), it was ultimately the difference that made Spider-Man so popular. However, the key element of that difference did not not emerge until issue #1 of "The Amazing Spider-Man," when J. Jonah Jameson begins his public crusade against the Spider-Man menace Ultimately, what made Spider-Man "different" was that he was considered to be a menace rather than a hero by the public, and usually neither Peter Parker nor his web-slinger alter-ego had any luck other than bad. Here was the comic book superhero as underdog. What is amazing as you re-read these stories is how well these comics stand up (with the glaring exception of "Spider-Man" #1 where they drop a net to try and capture John Jameson's errant space capsule and Spidey catches a ride from a jet fighter using his webbing). I was never a big admirer of Steve Ditko's artwork, especially the stuff he did after he left Marvel, but in going over these early Spider-Man comics I am very impressed with his compositional skills. Maybe it is because these are in black & white rather than in color that this strength of Ditko's artwork really emerges, but Ditko deserves a lot more credit than I had given him the first time around. There is also a "Spider-Man" tackles the Human Torch story that is drawn by Jack Kirby and inked by Ditko, which only goes to affirm the choice of the latter to draw Spidey (Kirby does bulk him up too much).As for Stan Lee's writing, well, I do not remember if he actually wrote "Millie the Model," but the soap opera elements of "Spider-Man" are superb as we go back to the ancient days of Liz Allen and Betty Bryant, well before the time of Gwen Stacy, and when Mary Jane Watson (sometimes "Watkins") was just the niece of Aunt May's best friend. Then there are the subtle twists on Superman, where the "Daily Bugle" is out to get Spider-Man and Spidey's biggest fan "Flash" Thompson is always picking on puny Peter Parker (cf. "Daily Planet" and Jimmy Olson), as Lee continued to play with the superhero genre. Finally, there is Aunt May, the beloved little old lady who was arguably the more unique and important supporting character Lee ever created at Marvel. No other superhero ever had a white-haired aunt who could never know the truth, who was terrified by the mere thought of Spider-Man, and who showed almost as much gumption during all those stays in the hospital on death's door as she did heart every day of her life. She was always Peter's best girl until the day s

A VOLUME OF TRUE CLASSICAL GEMS IN COMICS

Published by Thriftbooks.com User , 20 years ago
Very fine stories of young Peter Parker and his alter-ego super hero are present throughout these 400+ pages. The concept of creating a character whose human abilities of quickness, strength and agility are proportional to a spider was definitely a milestone for Stan Lee and Steve Ditko.Each page is well laid out, consisting of several frames per page and with plenty of plot and dialogue to read. The stories were carefully thought out, and they presented the comic fan with plenty to enjoy. It is sad that in modern times, so many comics have big pictures (thus few frames) but few words; such publications are overpriced and are completely read in virtually no time.It is both amusing and refreshing to see a young boy's triumphs and foibles as he is maturing into his added role as Spider-Man. Initially, he is idealistic and overconfident about his newly found super abilities and becomes bored with the criminal competition, but as the stories progress, the opponents become stronger and harder to overcome. Young Peter then begins to concede that maybe boredom wasn't so bad, after all.From start to finish, Peter Parker, as a character, is very pure and innocent. These two qualities now seem inapplicable in the many ubiquitous graphic novels where you can't really tell the good guy apart from the bad one. After observing how seemingly simple Peter Parker appeared in this volume and knowing that many of the stories were created before Kennedy's assassination and the Vietnem War, some may regard The Essential Spider-Man as outdated. I may agree, but only in the sense that you don't see very many works of art, comic book or otherwise, that contain messages or moments of inspiration that somehow communicate to the reader to, regardless of the difficulties that he or she is facing, NEVER, EVER GIVE UP! Somehow, this spark is widely present in this soon-to-be-forty-year-old collection, and it makes so many contemporary stories missing this element seem so lifeless in comparison.

Published by Thriftbooks.com User , 22 years ago
Now that Marvel Comics has picked over the bones of its original lineup until there is not a sliver of meat left on them, it is refreshing to reread the original stories and realize what a mighty, graceful beast Marvel once was, back when its writers and artists gave a damn. "The Essential Spider-Man" harkens us back to the early 60s, when an angst-ridden teenager first was bitten by a radioactive spider and learned that with great power comes great responsibility. Stan Lee is often ridiculed for his overwrought prose, but his Spider-Man tales remain extremely poignant and affecting some four decades after they were written, while their postmodern successors seem dated already. Perhaps the most amazing thing about the amazing Spider-Man is that Lee creates a supporting, non-superpowered cast which is often more compelling than the heroes and villains. Flash Thompson, Peter Parker's archenemy, is also Spider-Man's biggest fan, willing to undertake reckless acts of courage to keep his hero's name from being dragged through the mud. Betty Brant, whose brother died after an ill-considered criminal career, loves Peter Parker but despises his alter ego, building a wall between her and Parker that neither can breach. "The Essential Spider-Man" is packed with such realistic contradictions. The collection covers Amazing Fantasy # 15 (the first appearance of Spider-Man) through Amazing Spider-Man # 20 and Annual # 1. The tales feature some incredibly fluid artwork by Steve Ditko, Stan the Man's superlative writing, and the first appearances of such characters as Sandman, Kraven the Hunter, Dr. Octupus, and the Green Goblin. Lee and Ditko's creativity is to be marveled at, given the number of characters they created during these twenty issues which are still viable in 2000. If you're sick of the gorgeous garbage that passes for comics today, pick up this collection and see what the medium is capable in the hands of men who love it.

A definite MUST for all Spidey fans!

Published by Thriftbooks.com User , 22 years ago
Includes Spidey's origin in Amazing Fantasy #15 and the first twenty issues of The Amazing Spider-Man, as well as the very first Spidey annual from 1964. Once you read this one, you be wanting to get the other three volumes (which I also strongly suggest!). If you (like me) were not around to read the original Lee/Ditko Spider-Man stories, or even if you were, then by all means buy this book!

This book is cool

Published by Thriftbooks.com User , 22 years ago
I had not been much of a comic book fan (I love Garfield and Sunday Funnies, that was it) But since my recent trip to Florida and seeing Universal Studios' Islands of Adventure, I decided to buy a comic book or two. This collection caught my eye, so I picked it up and read the first comic right in the store. Wanting to know what happened to Peter next, I bought the book and never put it down.Yes, it is in black and white, but you don't really notice it. If you are a fan of Spider man, I reccomend you get this book. It really gives you the whole background to Spidey. I plan on buying the other two volumes!
Trustpilot
Copyright © 2022 Thriftbooks.com Terms of Use | Privacy Policy | Do Not Sell or Share My Personal Information | Accessibility Statement
ThriftBooks® and the ThriftBooks® logo are registered trademarks of Thrift Books Global, LLC