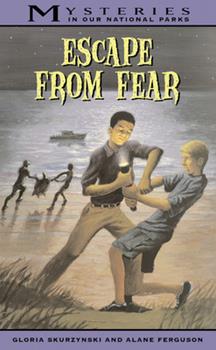 (Book #9 in the Mysteries in Our National Parks Series)

Something in the Virgin Islands National Park is destroying the coral reefs and causing the hawksbill sea turtle to disappear--and the Landons are trying to figure out what. Jack and Ashley soon become involved with the son of a U.S. diplomat who is anxious to save an island woman. What secret do they share? Includes a park map.

Published by Thriftbooks.com User , 13 years ago
great story line kids have read all the books in the series and really enjoyed them

Escape from Fear (Mysteries in our National Parks)

Published by Thriftbooks.com User , 14 years ago
My 11 yr old grandson, who is an avid reader, has read all 11 of the current Mysteries in our National Parks series. We purchased the first one while on a trip as a souvenir; subsequently I have purchased the remaining editions available and we are awaiting the 12th book. He is collecting the series, and plans to donate them to his elementary school's library at some point in the future. He has reread many of the issues. These books are excellent for the 10+ year old who is beginning to read "chapter" books.

Published by Thriftbooks.com User , 16 years ago
This book, ninth in the "Mysteries in Our National Parks" series, is set in the Virgin Islands National Park. The authors deftly weave information about endangered coral reefs and hawksbill turtles into the story, as well as Caribbean culture and history: Jumbies (evil spirits), basket-making, sugar plantations, the 1733 slave revolt, Haitian Macoutes, and the smuggling of illegal aliens from Haiti to the Virgin Islands. A map of the park and an afterword by a marine ecologist are included. The story's politically-correct ending is somewhat unbelievable, but the story will appeal to middle grade students reading at approximately fifth-grade level.
Copyright © 2020 Thriftbooks.com Terms of Use | Privacy Policy | Do Not Sell My Personal Information | Accessibility Statement
ThriftBooks® and the ThriftBooks® logo are registered trademarks of Thrift Books Global, LLC