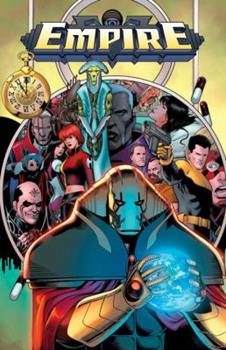 (Book #1 in the Empire Series)

Golgoth rules the world - or does he? The armored despot thinks he controls most of the populated Earth, ruling through military might and fear. But he can't even trust his own super-powered staff as some plot to free themselves from his grip. It's a tumultuous time as the balance of power begins to shift.

Published by Thriftbooks.com User , 12 years ago
I stayed up way to late last night because I couldn't put this down. I read the last three chapters after intending to only read one. Mark Waid is one of the great storytellers in comics and as he says in his forward he gets to construct the whole world in this story. The result is a "protagonist" who is a cross between Darth Vader and Julius Cesar. Golgoth runs a horrifying empire with an iron fist. This book really scared the hell out of me.

Published by Thriftbooks.com User , 14 years ago
Waid decides to turn his hand to a villain, with th excellent Kitson doing the artwork. Here, a superhuman dictator is the protagonist. This graphic novel is all about how far will he go to maintain control of his massive, far-spanning Empire. The answer - a lot. Don't expect a lot of sweetness and light. When this man has to make ruthless decisions, he most definitely errs on the side of ruthless.

Published by Thriftbooks.com User , 14 years ago
This story finally tells a superhero story from the perspective of the bad guy. Great concept, it's amazing how nobody thought of this before. Excellent execution, great story (even if you don't like superhero stuff), very unpredictable, and the ending will not let you down. I honetly feel like if this was cleaned up a little and a tad more ambitous, could have been as groundbreaking as Watchmen. Re-readability: 8/10 *I always put re-readability in my reviews for people who like to keep their TPB to re-read*

Published by Thriftbooks.com User , 15 years ago
This is top notch Mark Waid work. Being an adult title, he is not held to any code, so there is some swearing and brief nudity as well as violence. But unlike some other writers, Waid does not wallow in this freedom, the adult content is just touched upon in the right places and not used simply for shock value. Barry Kitson's art is fantastic. This story is focued on Golgoth, the supervillian who has taken over the world. It is an interesting perspective and a terrific read throughout. I hope they produce more in the future since the door is open for sequels. If you like the more adult take on superheroes like Dark Knight, then give this a try.

Published by Thriftbooks.com User , 16 years ago
If you ever wanted to read a comic book that focused on the Super Villain then this is the one for you. Golgoth is a somewhat tragic and complex character who is the type of super villain that Lex Luthor and Dr. Doom dream about being. He's a very successful conqueror and having to deal with that success, and the costs it extracts from him. He's come a long way and he's had to make some sacrifices to do so. Highly recommended for anyone who cringes at the stupid mistakes comic book villains make, or at the inevitable return to the status quo usually required of long standing series where the "hero" is the main character. That's pretty much the opposite of this character. I like that Golgoth comes across somewhat like a real person who seems to wear his mask at times to help him hide the emotions of dealing with what his intellect has told him he must do, even when in his heart he'd rather not do it.
Copyright © 2020 Thriftbooks.com Terms of Use | Privacy Policy | Do Not Sell My Personal Information | Accessibility Statement
ThriftBooks® and the ThriftBooks® logo are registered trademarks of Thrift Books Global, LLC