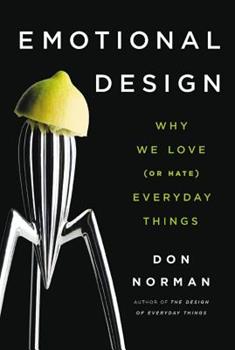 Emotional Design: Why We Love (or Hate) Everyday Things

by Donald A. Norman

Did you ever wonder why cheap wine tastes better in fancy glasses? Why sales of Macintosh computers soared when Apple introduced the colourful iMac? New research on emotion and cognition has shown that attractive things really do work better, as Donald Norman amply demonstrates in this fascinating book, which has garnered acclaim everywhere from Scientific American to The New Yorker . Emotional Design articulates the profound influence of the feelings...

Jakob Nielsen's Other Half

Published by Thriftbooks.com User , 14 years ago
This book breaks down 3 categories of things we look at when we're deciding whether or not we like things, and then proceeds to show how one can analyze everyday things in those terms. I wouldn't say it's enlightening, but it does give you categories and terms for expressing things you already knew on some level. Don Norman's writing style is warm, and personal, and the book is easy to read. I've seen his name next to Jakob Nielsen's plenty of times but had no idea who he was or what he was about, so it gives a little insight into who Don Norman is as well, and why he and Jakob make good partners.

Simple, wonderful, insightful, great book by a great thinker and scientist. See other resources, to

Published by Thriftbooks.com User , 15 years ago
I've been thumbing through this book for the last month, and I have to say that I love it. I've admired Donald Norman, one of the greatest living cognitive scientists, from afar for over 20 years. He was seemingly afforded "guru" status when he visited the University of Colorado's Institute of Cognitive Science in the mid `80s - an esteemed, accessible and entertaining cognitive/computer scientist (and also a cantankerous one) who had pioneered the human factors movement. His entertaining and friendly style was informed by creative, deep, empirical, theoretical work in cognitive science. I came to trust his insights whenever I dabbled in "usability" and "human factors" issues. (Trust me--there are plenty of people who think they understand these things, but Norman is the real deal who delivers the necessary stuff... Check out his masterpiece, "The Design of Everyday Things."). By the time I arrived at UCSD in the late 90s, he had already left our university for Apple Computer, but he seems to have left an indelible, positive stamp on the place. His photo hangs outside of our Francis Crick Conference Room as one of the great scientists who worked here. The current book shows that "attractive things work better" (which is the title of one of Norman's classic essays). Norman dabbles in cognitive, emotional, behavioral and neural science as he makes his key points, showing that "works better" is a multifaceted psychological, emotional, and neural concept. The thesis is much like the ones that permeate clinical psychology in the form of Cognitive-Behavioral therapies (e.g., Beck & Ellis). However, the ideas contained herein inform product design, product choice, and product ownership. The chapter on "three levels of behavioral design: visceral, behavioral, and reflective" is at the heart of this book (as described by other reviewers), and the one that sticks with me the most. If you are interested in a quick tour of "emotional design", read that chapter and look at the striking yet simple pictures throughout the book. Read some of Norman's amusing stories about objects that he owns... Then, if you are hooked, read the whole book. I recommend that readers check out some of Norman's interviews and podcasts that coincide with the release of the book. On Norman's website, there is a section titled interviews. Follow the link for NPR's WHYY interview - it is great stuff. Or watch brief the video accompanying the Benjamin Franklin award in Computer and Cogntive Science. Or watch one of the podcasts. Any of these things will help to bring the key design concepts, and Norman's insightful universe, to life. I use these things in the Cognitive Psychology courses that I teach, and I find that they get students talking, and excited, about the interface between congnition, emotion and design. Great book!

Complements The Design of Everday Things

Published by Thriftbooks.com User , 16 years ago
Fills some gaps left by The Design of Everday Things, in particular regarding the "visceral" and "reflective" aspects of design. This is not a textbook, but a very readable summary of the authors scientific publications, with plenty of insightful comments and anecdotes.

Published by Thriftbooks.com User , 16 years ago
This book deals with an important concept about design that is often overlooked, the role of emotion in the functionality of objects. Professor Norman hits on a theme that far-too-often passes over the heads of techno-geeks and even those designers who are more considerate about how human psychology plays a role in making objects easy to use. This theme basically recognizes that humans are more adept at using objects that incorporate positive elements such as fun, nostalgia, and excitement. It also explains why some supposedly functional elements detract from the usability of objects. For example, auditory signals can provide useful information, but don't you get tired of all the things that beep at you. Pavlov's dogs salivated at the sound of the bell, but how many people salivate when a microwave oven beeps? Likewise, `57 Land Rovers are underpowered, noisy, bumpy, sans radio, cumbersome to fuel, and equipped with an electrical system that favors ready access to a fire extinguisher. They are also great fun to drive. If there are objects in your life that you love even though they seem to break the rules of logic, or objects that you loathe even though they have features that are seemingly useful, this book will help to explain why.

This is a MUST READ for designers

Published by Thriftbooks.com User , 18 years ago
As I get older, I begin to see that designing is really about seeing, hearing, thinking and understanding at a higher level. If you're looking for an easy how-to for making your website or product punchier, this isn't for you. For me, the book was a perfect read. I am always hunting and gathering for the meaning of art and design, to push my own work forward, and to gain an advantage over my competitors in terms of design. Thus, Norman's book was right up my alley. His deconstruction of design into its visceral, behavioral and reflective aspects was powerful and compelling, and I believe this book is actually a manifesto that will eventually launch a new school of thought in design. The second half of the book delves into even more complex and forward-thinking issues, and I found it useful for FORCING myself to read and think out of the box. It's an absolute must-have book for anyone interested in understanding the structure of the new design revolution and transforming their perspective on the art of designing at an emotional level.
Trustpilot
Copyright © 2022 Thriftbooks.com Terms of Use | Privacy Policy | Do Not Sell My Personal Information | Accessibility Statement
ThriftBooks® and the ThriftBooks® logo are registered trademarks of Thrift Books Global, LLC