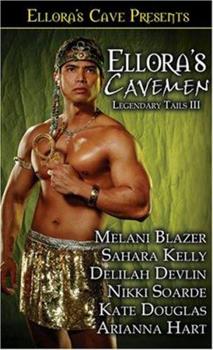 (Book #3 in the Legendary Tails Series)

Close Encounters of the Carnal Kind By Delilah DevlinCajun Etienne Lambert, ex-soldier fresh from the horrors of the war in Iraq, doesn't believe her when the alien woman on his doorstep says she's... This description may be from another edition of this product.

Published by Thriftbooks.com User , 13 years ago
The Last Bite by Melani Blazer: Elliot Simpson works as a bounty hunter for a highly secret agency. He is committed to protecting human-kind from rogue vampires and werewolves. Creatures that most humans believe to be mythical. His focus is to hunt and kill the vampire that murdered his brother. His fellow hunter and lover, Laura Kline, appears at the scene of his latest bounty after having disappeared six years earlier. She claims that she has been sent to kill him, and Laura tries to warn Elliot of the threat facing him. Losing his focus to the passion Laura inspires, Elliot discounts the danger until he has no other choice but to face it head on. When Elliot's secret is revealed, will Laura be strong enough to accept the truth. A thrilling tale, I never saw the ending coming! I mourned with Elliot over the loss of his brother and the time he lost with Laura. I was quickly immersed into the story and it ended too soon. Hot sex, romance and a great plot makes this Melani Blazer story a real page turner. Hard Lessons by Nikki Soarde: When Kaley Carrone discovers evidence of her husband's infidelity, she wants a divorce. Unfortunately, the pre-nuptial agreement will leave her with a tiny fraction of the wealth she worked hard to acquire during their marriage. Kaley plots to get her share of their assets and to get revenge on her cheating husband. With the help of a former lover and his friend, she stages her kidnapping to secure a 'ransom' and freedom from her marriage. And if she can make her husband suffer in the process, all the better for her revenge. Holed up with two sexy 'kidnappers', Dan and Mason, Kaley's plan for revenge may net her more than she could have ever expected. Although they say revenge is a dish best served cold, I prefer Nikki Soarde's approach! Fiery hot! I loved Kaley's various methods for twisting the dagger. Very imaginative! And speaking of imaginative, the deliciously steamy sexual escapades Kaley, Mason and Dan enjoy... well let's just say my imagination was ignited! Close Encounters of the Carnal Kind by Delilah Devlin: Etienne, an ex-soldier, wounded and heartsick over the loss of his military comrades in the Iraq war, returns to his home in the bayou to lick his wounds. Hearing that his Uncle Jacques is telling everyone about an alien encounter, and that the aliens are seeking Etienne, he is sure his uncle is crazy. So when a beautiful woman arrives at his refuge, claiming to be an alien, he thinks she is sent as a hoax. Mariska, a fightership commander, tries to reason with Etienne and share with him his destiny. For he is the future king and last hope for their planet. As the only surviving fertile male of the ruling class, he must return with her to a well stocked harem and propagate the ruling classes next generation. When Etienne refuses to see her tale as anything other than fiction, she kidnaps and transports him to her ship. Can Etienne accept the destiny Mariska describes or will he
Copyright © 2022 Thriftbooks.com Terms of Use | Privacy Policy | Do Not Sell My Personal Information | Accessibility Statement
ThriftBooks® and the ThriftBooks® logo are registered trademarks of Thrift Books Global, LLC