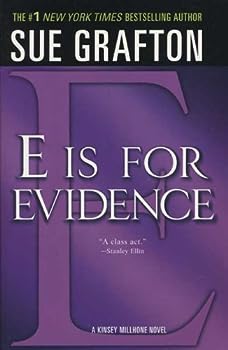 E Is for Evidence

(Book #5 in the Kinsey Millhone Series)

This description may be from another edition of this product. No one writes a thriller like #1 New York Times bestselling author Sue Grafton. In E is for Evidence , PI Kinsey Millhone becomes the victim of a nasty frame-up... E IS FOR EX Being a twice-divorced,...

Classic mystery of twists and turns to keep you guessing

Published by Thriftbooks.com User , 20 years ago
I didn't read Kinsey Milhone in order of the alphabet - I started at about M and went backwards and forwards as I bought the books. I have been gradually piecing her life together as I go and E is for Evidence was the last one I've turned up (P isn't due out for another couple of weeks) and my goodness this is good - I think it must go to the top of the pile as the best of her books so far. The mystery is complex, Kinsey's personal life so intertwined with the mystery that it is hard to pick your way between the two, and it is written in classic Grafton style without pathos and self-pity.After having finished I was thinking over the themes which underlie this book, Kinsey's aloneness, her fear of betrayal, her past betrayals and lack of family - they are all cast into stark reality with the coming of Christmas and New Year - a time when family is the most important. Yet the telling of the story left me without feeling sorry for Kinsey (I tend to be the sort of person who cries at television ads) because Grafton produces such a strong, sympathetic and real character in Kinsey. It is hard to feel sorry for her as she rejects sympathy - even from her readers. I think it shows Grafton's incredible skill as a writer.As a story this book just knocked my socks off - it has layers like you wouldn't believe, and kept me guessing until almost the very last page as to what was going on and what was going to happen. Kinsey Millhone is given a file to check out an insurance claim on what seems to be a straightforward fire at a company Wood/Warren. The Wood family are old friends of Kinsey's from way back and all seems in order when she checks things out. Unfortunately she has been set up - the fire was arson, a factor which doesn't come to light until after she has investigated the fire - papers were left out of the original claim file which would have pointed in that direction. Now she is on suspension and being investigated herself for corruption. All around she is looking for answers and people aren't telling her the truth. She is forced to ask favours from people she has never much liked - and it isn't helped that her beautiful and dissolute ex-husband Daniel has turned up on her doorstep to complicate things. All this is set against the worst possible Christmas and New Year on record.

Published by Thriftbooks.com User , 22 years ago
Lots of twists and turns. Fast past. Emotional. There is one line that states my own experience/thoughts perfectly. "There's a certain class of people who will do you in and then remain completely mystified by the depth of your pain." Grafton is upfront & right-on. She is also VERY FUNNY. Her books are a gas to read.

Published by Thriftbooks.com User , 22 years ago
As a Kinsey Millhone fan, I must say that the "E" installment of the series, is the richest and most suspenseful, (with "K" is for Killer, being right behind it). The book begins almost slowly, but picks up at a frightening (literally) pace. The middle of this novel is one of the most surprising I have found in a Grafton novel to date. We are allowed to glimpse into Kinsey's past marraige to Daniel and find the reason out behind his abandonment of her. I read through these books the day i receive them. All I can say, is that when Grafton hits Z, She had better pick up with 1, 2, 3 etc. because we all would miss Kinsey too much!! Bravo!

"E" is for Entertainment

Published by Thriftbooks.com User , 23 years ago
Sue Grafton continues to entertain and keep us coming back for more of Kinsey Millhone's adventures. With "E" is for Evidence, Grafton once again brings us in step with Kinsey and this time she has a lot to lose--her reputation and her business. She is the victim in an extortion plot and she must defend herself by becoming her own client. The familiar characters that her readers know so well come to life again and we are happily transported to California, deeply immersed in her puzzling case. Kinsey is one of the first of the female private investigators and remains one of the best! Sue Grafton also is at the top of her form, keeping the reader engrossed and wanting more! If you haven't read this letter of the alphabet yet, don't hesitate. There are others to come and they just keep getting better and better!

An excellent read for any fan of female hard-boiled PIs.

Published by Thriftbooks.com User , 23 years ago
"E is for Evidence" is a good example of the fine writing Sue Grafton has been doing since her Kinsey Millhone series debuted in 1982. Any fan of Sara Paretsky's V.I. Warshawski, Karen Kijewski's Kat Colorado, Marcia Muller's Sharon McCone, or Virginia Lanier's Bloodhound series will definitely enjoy this wonderful series. The main character is Kinsey Millhone, a private investigator, twice-divorced, 32 years old, former cop, who resides in Santa Teresa, CA (thinly veiled Santa Barbara). She is an independent woman with Wonder Woman sheets. In "E is for Evidence," Kinsey Millhone faces one of her toughest cases yet. She is being framed for insurance fraud and arson at a time when her support network is unavailable due to the Christmas holidays. On her own, she must discover who is behind the frame-up and clear her name. She discovers that this tangled web has roots that go back more than twenty years. A run-in with former husband Daniel Wade only complicates the situation. The shocking ending will leave the reader hungry for more. A must read for any mystery fan!
Copyright © 2020 Thriftbooks.com Terms of Use | Privacy Policy | Do Not Sell My Personal Information | Accessibility Statement
ThriftBooks® and the ThriftBooks® logo are registered trademarks of Thrift Books Global, LLC