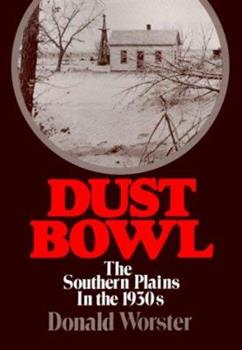 Dust Bowl: The Southern Plains in the 1930s

In the mid 1930s, North America's Great Plains faced one of the worst man-made environmental disasters in world history. Donald Worster's classic chronicle of the devastating years between 1929 and 1939 tells the story of the Dust Bowl in ecological as well as human terms.Now, twenty-five years after his book helped to define the new field of environmental history, Worster shares his more recent thoughts on the subject of the land and how humans interact...

My favorite book about the Dust Bowl

Published by Thriftbooks.com User , 13 years ago
Looking at the cover, this book seems as if it's going to be something really academic--and it is scholarly and knowledgeable--but it's never academic in the bad sense, in the boring sense. I read this right after reading Timothy Egan's "The Worst Hard Time," and found this book's descriptions of the devastation caused by the 1930s Dust Bowl to be much more vivid and gripping, this book's facts to be much quirkier and more interesting, and this book's scope to feel much broader and more widely felt. With "The Worst Hard Time," I got the idea that the whole thing really only affected a handful of counties, which I knew was wrong, but with this book there was no denying just how epic the whole ordeal was. I loved this book (despite its author's amusing tendency to quote Marx) and consider it to be perhaps the very best book I've read about the Dust Bowl--and I've read a few of them. You should read it, for sure.

A most essential book for these times

Published by Thriftbooks.com User , 19 years ago
As most persons are aware, these are times of climatic change, with the West becoming warmer and drier. These changes are episodic, but mankind's response to them is not so predictable. Professor Worster's excellent coverage of the Dust Bowl, one of the greatest agricultural and ecological calamities in history, shows that, with a little foresight and honest recognition of the limitations of technology, much of the harm caused by shifting climate can be prevented. In that respect, it is a hopeful text.Professor Worster, however, views history from a Marxist standpoint, a trait that colors some of his conclusions. While I agree with him that land is frequently viewed by the shortsighted as a commodity to be used and discarded, I feel that the lessons of the Dust Bowl have resulted in safer, drought-resistant patterns of crop farming. However, as Worster adroitly points out, the shifting in agricultural practices in the Southern plains is accompanied by a wasteful use of available underground water, raising a peril of the Dust Bowl's return. So have we really learned anything? Time will tell, and not very long from now. So far as Professor Worster addresses the socio-economic causes of the reckless destruction of the short-grass prairie ecosystem for quick profit, his discussion is masterful His organization of topics and chronology is excellent, and the reader will not soon forget the horror of living with the dust. The photos of dust storms and their effect are almost nightmarish. Regardless of one's irritation at the myopia of those who try to farm mrginal land, his is a sympathetic portrait as well, waxing almost lyrical in his discussions of the effects of crop failures on the local populace. The book is copiously reserched and peopled with personal anecdotes of those who lived through the "Dirty Thirties". This narrative includes not only the local citizenry, but contains numerous passages about governmental attempts to allay the crisis. I recommend this book very highly. I think anyone who likes history, who is concerned about the effects of climatic change, or both, ought to read this book very carefully. It should be an essential part of anyone's library.

The Land Strikes Back

Published by Thriftbooks.com User , 19 years ago
In Dust Bowl, Donald Worster masterfully transports the reader to a time when the land seemed to rise up in protest against those who would try to dominate it. The author points out in the introduction that the Dust Bowl and the Great Depression took place at the same time, and that both events "revealed fundamental weaknesses in the traditional culture of America, the one in ecological terms, the other in economic." Worster successfully weaves a revealing tapestry in his monograph that supports his argument, by presenting capitalistic values and motives as the human element involved in the Great Depression's "Dust Bowl Days." The natural environment caused the winds to blow and the rains to stop, but the farmers of the Great Plains, in an attempt to reap a profit from the land, destroyed the prairie grasses by plowing them under. This left the nutrient-rich topsoil in an exposed position, where intense drying heat and voracious winds could forcefully thrust the sandy granules of soil into the atmosphere. Dust Bowl is divided into five parts, and the author has a personal interest in the subject and the location of this ecological disaster. The author dedicates this book to his parents, who actually experienced the trauma of leaving the plains for California during the Great Depression. Although the author was born in California, he spent his childhood living on the Great Plains and considers himself "a native son." The first part of the book provides insight into what a dust storm was like, and how this severe wind erosion effected the land, the people, and the nation in general. Part two gives the reader a sense of place, by explaining the chronological physical history of the Great Plains from prehistoric times to the mechanized wheat farming of the early twentieth century. In part three, Worster concentrates his study toward Cimarron County in the Oklahoma panhandle during the "dirty thirties," by describing people's experiences, government programs, and quotes from historical documents. Moving north to Haskell County, Kansas, Worster scrutinizes this region by interpreting economic, political, social, and agricultural trends evidenced by historical data. The final chapters of the book relate the history of the agricultural conservation movement in the United States, describe the delicate balance between all living things in an ecosystem, and illustrate why the "filthy fifties" took place and how other agricultural disasters may appear in the future. While some may disagree with Worster's attack on capitalistic values and label his perspective as politically biased, one cannot refute the hard, cold, documented evidence of how economics dominated agriculture and caused the catastrophic disaster of the Dust Bowl. Without considering a history of drought in the area, the farmer used the tractor and plow to cut deep into the soil in order to turn the Great Plains into a giant "wheat factory." The standard of living in the United States was risin

Published by Thriftbooks.com User , 21 years ago
My mother was born and raised on a west Kansas wheat farm. She grew up in the "dirty 30's" and I spent my summers as a child on that farm in the "filthy 50's". However, I know she saw a lot more blowing dirt in the 30's than I did in the 50's.I think this book does an excellent job of presenting the human side of the dust bowl disaster. He doesn't romanticize the people who lived in that section of the country or their part in the ecological disaster. He describes in a lot of detail what factors led to the disaster. Apparently it was primarily due to both drought and a short sighted desire to strike it rich plowing up grassy prairie to plant wheat. The growing of wheat during the 1910's was especially profitable because of high prices. Unfortunately, the center of the dust bowl was and is highly unsuited for any agricultural practice that leaves the soil fully exposed to wind erosion.About my only complaint of the book is that it gets a little heavy handed on the idea of an agrarian "utopian" world. When I was younger I liked liberal "utopian" dreams as well. However, I think that human self-interest is never going to fully go away. It's good to appeal to people's idealism, communitarian and environmental values, etc. However, any meaningful solution also needs to be sympathetic to the human beings trying to make a living in this dusty land.

Family from Center of Dust Bowl

Published by Thriftbooks.com User , 21 years ago
Our family has farmed in the panhandle of Oklahoma for almost 100 years. We still farm there, and in Texhoma (North Texas) both in the center of the dust bowl. My mother grew up there and was always telling us how severe it was and we (as her children) didn't really believe that it could be as bad as she said. However, since that time, we have reviewed the book, and seen a video of actual motion pictures of that period, - in the very area that was the subject of the book. Everything we have seen, and heard from all of our relatives who lived there at this time appear to be in total agreement with the book.We still farm there and it seems that the cyclical weathern pattern could be developing for a reoccurance of the same pattern, especially since the water table used for irrigation (so important in that part of the U.S., is decreasing yearly. Randy Miller
Copyright © 2020 Thriftbooks.com Terms of Use | Privacy Policy | Do Not Sell My Personal Information | Accessibility Statement
ThriftBooks® and the ThriftBooks® logo are registered trademarks of Thrift Books Global, LLC