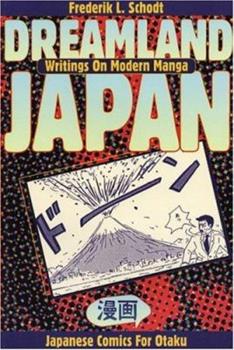 Discusses the different forms, styles, artists, and publishers of manga, the popular form of comic book in Japan.

A major resource on MANGA

Published by Thriftbooks.com User , 21 years ago
It tops Mr. Schodts original look at manga, which I didn't think was possible. Well researched, but at the same time engaging and easy going. Gives insight into how the Japanese people think, feel, and behave. Now if only someone would write a book on French comics and Graphic Albums.

A very shrewd observing of the whole manga culture

Published by Thriftbooks.com User , 21 years ago
This handy little book explains it all: why the unexplainable boom of girlie-girly obsession especially with much older males, all the different levels of manga readership ranging from boy's and girl's comics to instructive comics for young mothers who were once street punks to very cynical workplace comics for middle-aged salarymen which are not at all unlike the American comic strip "Dilbert". And you are also introduced to a great variety of Japanese comics, well-known or not - including the perverted, gross-out, and graphically violent ones that no American page will ever accept! You will personally witness the very evolution of the medium all the way from the prints of feudal days to a whole cultural spawn of both manga and anime alike that frequently (for some reason) feature the usual skinny, wide-eyed high-schooler, but not quite always. In addition, we learn all about the very surprising consquences caused by the very creation of manga, including the tragic incident of tear-gas bombing in the Toyko subways; women already into their 30s trying to look like little girls in sailor uniforms; and the massive censorship of the most offending manga. A very fascinating and educational read as well as a entertaining one all about the immensely popular work from The Far East. And if you want to learn some more, try "The Anime Companion" as well!

An excellent introduction to manga for the beginner....

Published by Thriftbooks.com User , 22 years ago
....and absolute gravy for the connoisseur. Actually, for the veteran manga fan, the return of Frederik Schodt in Dreamland Japan is a delight. His first book Manga! Manga! was for many of us the first scholarly recognition of the genre (which is not to say it was boring, either). His new book provides a tour of the huge variety of manga available in Japan today, from old favorites like Shonen Jump (where many of my favorite manga series, including Dragon Ball Z were first published) to the explosion of shojo (girl) manga following the success of Sailor Moon, to the more esoteric genres of hentai (pervert, or pornographic) and pachinko manga. The writing is lucid, as before, and has a sympathetic yet cool view of Japanese pop culture. There could be more illustrations (what's a book about manga without the pictures?) and a more comprehensive list of manga sources, artists, and publishers, but this is the kvetching of a longtime manga fan. Readers new to the world of manga will be surprised and enlightened.

A master work from the nabob of Japanese manga

Published by Thriftbooks.com User , 23 years ago
This is the New Testament to his work of Biblical proportions Manga! Manga!. Kore kara mo kitai shite orimasu.

The authoritative history and reference book.

Published by Thriftbooks.com User , 24 years ago
This is the most comprehensive overview of the topic I've read to date. It's obvious the author has a passion and uncommon depth of understanding of manga and Japanimation. At the moment, it is the authoritative reference book.Nice work, Fred.
Trustpilot
Copyright © 2022 Thriftbooks.com Terms of Use | Privacy Policy | Do Not Sell My Personal Information | Accessibility Statement
ThriftBooks® and the ThriftBooks® logo are registered trademarks of Thrift Books Global, LLC