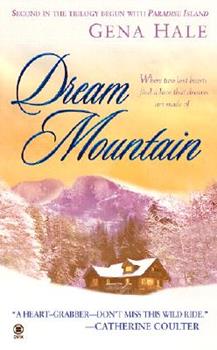 (Part of the Dangerous Sanctuary (#2) Series and Shandian (#2) Series)

by S.L. Viehl and Gena Hale

The hunt isnrs"t over yet. The danger in Paradise Island has found a new sanctuary to invade. And a new pair of lovers to tear aparthellip; He has known danger and betrayalhellip; hellip;and was driven to fake his own death. Now hers"s hiding out in winter-bound Colorado, desperately trying to elude his enemies-once again, in peril. A strange woman has appeared at his mountain refuge. She is beautiful, charming, and stunningly sexy-and just happens...

This Book Has It All!

Published by Thriftbooks.com User , 20 years ago
The second in a trilogy, following "Paradise Island," Dream Mountain does not disappoint! There's romance, mystery, action, suspense, with humor thrown in to sweeten the mix! A wonderful book! I loved the chemistry between our heroine and the man she initially mistakes for a bear and shoots with rock salt. Highly recommended!

Romance, Intrigue, and Toss in a little Humor...

Published by Thriftbooks.com User , 20 years ago
Dream Mountain, the second volume of imaginative Gena Hale, and S.L.Viehl's three book series starting with Paradise Island is set a top a mountain in the Colorado Rockies known as 'Dream Mountain.' The word dream subtly suggests tranquility, but the story is anything but tranquil! Dream Mountain is a compelling adventure that will have this author's many loyal fans swiftly turning the pages. A novel not to be ignored!

Perfect blend of romance/suspense and a dash of humor!

Published by Thriftbooks.com User , 20 years ago
This is the second book in a trilogy starting with PARADISE ISLAND released in 2000. This is a tale of intrique and adventure with romance and some humor that will having you laughing out loud! The characters are well developed and three-dementional. This was a fast-paced, non-stop action packed adventure in the Colorado Rockies on a mountain called Dream Mountain.Gareth Tremayne was forced to fake his own death in order to hide from the very people trying to kill him. He is hiding out in winterbound Colorado on top of Dream Mountain. He has been up there so long he no longer thinks he will ever get back to civilization. He has been sneaking into a closed down cabin on Nightmare Ridge during the cold spells lately, but a strange woman with red hair and tempting eyes has invaded his sanctuary! Was he one of THEM??? After thinking about this dilemma for awhile, he begins to rummage through her trash cans outside looking for information on who she could be when he finds himself looking down the barrel of a shotgun held by none-other than the beautiful redhead! Delaney Arlen is furious! Her Uncle Sean has left her stranded in his old cabin on top of this godforsaken mountain top with no electricity! How dare he! Her mind is devising ways to torture him slowly when she sees a bear rummaging through her garbage cans once again, fed up with her life lately she grabs her uncle's shotgun filled with salt pellets and goes outside into the blizzard now howling. When the bear doesn't seem to heed her warnings she shoots it only to discover that the hungry 'bear' is no bear at all, but a large man. And soon Laney finds out a VERY handsome one too! But extremely paranoid large, handsome man at that!When Gareth, or Joe as he wants her to call him for now, finds out she has the same name as his enemy, Delaney! She was the one sent for him! He wasn't going to let her get the best of him! In numerous blizzards covering the small cabin and bone-numbing cold around them, Joe finds himself unbearably attracted to the redhead sent to kill him. But was she the one sent? She didn't seem like a hitwoman. In turn Laney thinks he is nuts and also feels an attraction that she cannot deny. Who was he? Some Vietnam vet gone crazy? Or a homeless man wandering around in bear furs? Whoever he was he was extremely sexy and very crazy...where was Uncle Sean?! They were trapped, trapped in this cabin and with no way off the mountain! Why did he think she was sent to kill him? And why are men with guns sneaking around? Uncle Sean!This had me laughing throughout! The chemistry was explosive between Laney and Joe. Will they find love on Dream Mountain? Or hell on Nightmare Ridge...in a place filled with secrets as deep as the mountain, they must learn to trust one another and find a way out before they're killed... This is a definate keeper! The love scenes are steamy beyond compare! A wonderful love story that will have you on the edge of your seat!
Trustpilot
Copyright © 2022 Thriftbooks.com Terms of Use | Privacy Policy | Do Not Sell My Personal Information | Accessibility Statement
ThriftBooks® and the ThriftBooks® logo are registered trademarks of Thrift Books Global, LLC