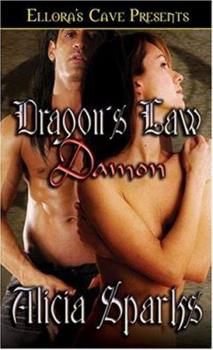 Dragon's Law - Damon By Alicia Sparks Second in the Dragon's Law series. Damon has lived with guilt and regret for six long years and has finally decided to put an end to it. He knows his betrothed,... This description may be from another edition of this product.

Published by Thriftbooks.com User , 13 years ago
If one is completely honest, books like this are not supposed to be super deep when it comes to the plot, so don't expect that. There is a fine line that needs to be tip-toed while writing a book like this, and this book delivers. People really want one things from books like this: heat. The chemistry is there and the plot moves us along just far along to facilitate more heat. It's a good read, and the series of books that make up Dragon's Law all work together quite well. This isn't "War and Peace." It was never supposed to be, but for what it was written for, it is truly great. Two thumbs up.

Sex, Dragons and More! Hurry To Get Your Copy Today!

Published by Thriftbooks.com User , 16 years ago
In a world controlled by sex and dragons, it is one man's quest to right his wrongs and find from his past the woman he dishonored, so he may move forward toward his future, in a kingdom known as Tyr! Six years ago, Damon is given a decree telling him whom he must marry. He decides to take matters into his own hands and kidnap his betrothed. This set into motion a chain of events that will alter his life forever. The night before they are to be married, his brother Mace marks Kira with his dragon's bite. Mace then sends her through a vortex crushing his brother's future plans. Damon has lived with his loss and guilt for the last six years not knowing what happened to Princess Kira. A new decree has been handed down to both he and his bother Mace. Whoever gets married first, will become the leader of their kingdom. Now it is imperative that Damon finds his true love and brings her back home to their realm, before the dragon is unleashed! DRAGON'S LAW: DAMON is by Alicia Sparks and is the second in this series. It follows in the footsteps of DRAGON'S LAW - MACE, which is in Ellora's Cavemen: Tales from the Temple II. This is a beautifully written mythological tale of love. The sexual content will burn you like the fire-breathing dragon it is written about. The storyline is original and the characters are so full of life that you can almost reach-out and touch them. Ms. Spark's does an excellent job projecting the mood and tone of the love scenes between Damon and Kira. They are filled with fiery sexual aggression, and yet, poetic in nature. Damon's emotional love for Kira is so real they seem to explode right off the pages. Damon's penitence and pain will wound your heart and is very touching. Both he and Kira will have to resolve the past before they can begin moving toward a hopeful future. There is one issue this reviewer had with this book; there was not a well-defined definition between the dream sequences and the true dialogues, which made for a confusing, and longer than necessary read at times. Ms. Spark's pens a magical masterpiece that will tug at your heart and make you wish for love everlasting. For those that treasure a HOT mythological tale full of passion, fire and above all love you do not want to miss the wonderful distinctiveness that sets this book apart from the rest called DRAGON'S LAW: DAMON!
Trustpilot
Copyright © 2022 Thriftbooks.com Terms of Use | Privacy Policy | Do Not Sell My Personal Information | Accessibility Statement
ThriftBooks® and the ThriftBooks® logo are registered trademarks of Thrift Books Global, LLC