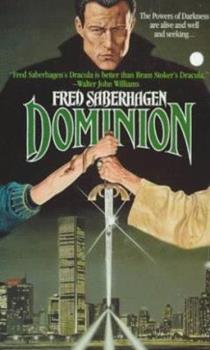 (Book #5 in the Dracula Series)

The powers of Evil are alive and well in modern-day America. Vlad Tepes, Prince of old Wallachia in life and Master of the Undead beyond the grave, has roamed modern America without fear--until now. Suddenly, he is no longer the only immortal being in Chicago.

Published by Thriftbooks.com User , 24 years ago
It's all very well to say that Fred Saberhagen's Dracula series is always enjoyable, as I have seen one reviewer state, but this particular book is phenomenally good. It is number five in the series, but can be read as a standalone story as I did the first time. Dracula (a good guy) meets Merlin, still ensorceled by Morgan La Fay and a pathetic shell of himself. There are details in the book that I found truly chilling, as I seldom do in fiction (the only other good example was Peter Straub's "Ghost story"). To see what I mean, follow the subplot of the stage magician (not a real magician) giving a performance at La Fay's castle, and how he learns about his heritage.
Trustpilot
Copyright © 2022 Thriftbooks.com Terms of Use | Privacy Policy | Do Not Sell or Share My Personal Information | Accessibility Statement
ThriftBooks® and the ThriftBooks® logo are registered trademarks of Thrift Books Global, LLC